It has been cold in Saint-Aignan for the past two weeks. How soon we forget the extra-warm autumn we had. I'm shivering this morning. We haven't had any snow yet, but we have had very heavy frosts and some freezing fog this week. 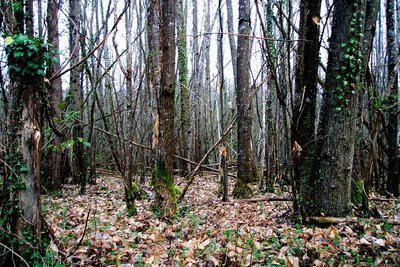 The woods that surround La Renaudière
The temperature outside this morning is -3.5ºC — that's about 26ºF. It's been gray and foggy all week, and the temperature has hovered around freezing. It gets depressing after a while, despite the fire in the wood stove and the good Christmas dinner leftovers — not just turkey and dressing, but foie gras and brussels sprouts with chestnuts. Yesterday I made a big pot of turkey soup that helped fend off the chill. 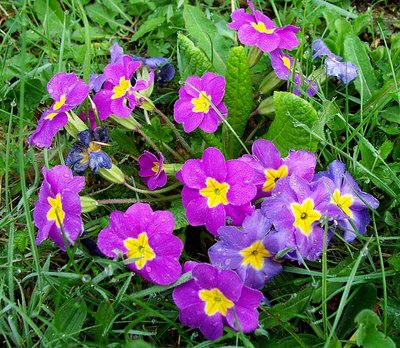 Primroses are about the first flowers we see in the spring.
Yesterday afternoon I was looking at some pre-blog pictures and found a little set that I took in early April 2005. I say "pre-blog" because I didn't start blogging until about 6 months later, in October 2005. 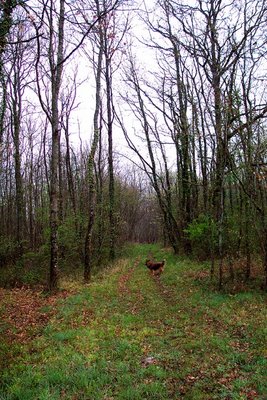 The woods start to green up again by March.
There's Collette a year before her passing.
Back then, I would send out such pictures to a small group of friends. Nowadays, those same friends have to look at the blog to see what's doing in Saint-Aignan, and it's less personal in a way. But I also don't have the feeling that I'm clogging up people's e-mail boxes with pictures. People can look at their own leisure — or not. 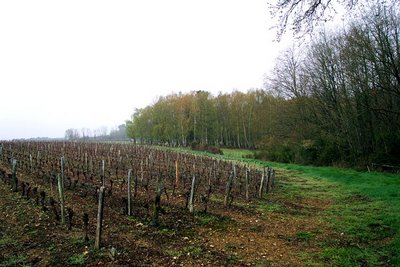 The Renaudie vineyards, our extended back yard, in early April 2005
Saint-Aignan is pretty in the spring. Most places are, aren't they? The days have gotten significantly longer by March and April, and warm breezes start to blow. The trees bud out, and bulbs push up new greenery and flowers. Getting out for a walk in the vineyards is fun, and it was especially pleasant when we had Collette to go walking with. We plan to get a new dog this spring. Maybe a Border Collie. 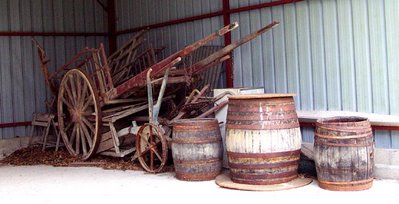