Laurie and the piano at Montrésor

On his blog yesterday, Walt posted a video of our friend Laurie playing the organ in a church in Anniston, Alabama, that we visited back in late October. He mentioned that Laurie had visited us here in Saint-Aignan in February 2005 and played the historic piano at the Château de Montrésor. That brought back a nice memory. I didn't take a video of her playing, but I did take some still pictures.

Here's what I wrote in an e-mail to friends the next day: 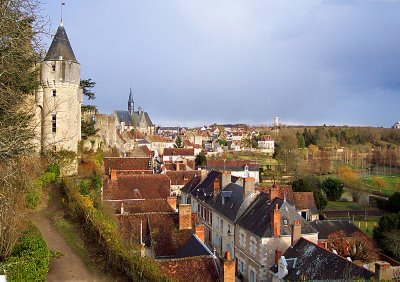 The village called Montrésor, one of the prettiest in France

...Laurie and I drove on to Montrésor, which was the highlight of the afternoon. The sun came out, the wind died down, and the rain & snow stopped. Montrésor has the L'un des Plus Beaux Villages de France designation, and it is pretty with its château, church, and old houses. 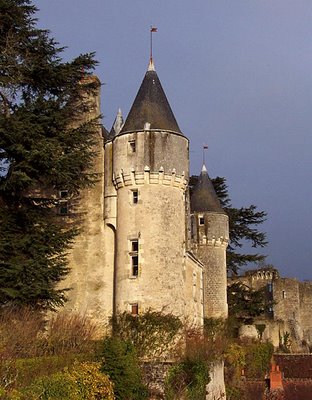 One of the château towers

Laurie and I parked in the lower town and walked up the hill to the church, which I had visited before and found very interesting. But it was closed — there was a sign on the door that said something like l'église est temporairement fermée à cause de dégradations. I have no idea what the dégradations were, but we couldn't visit the building... 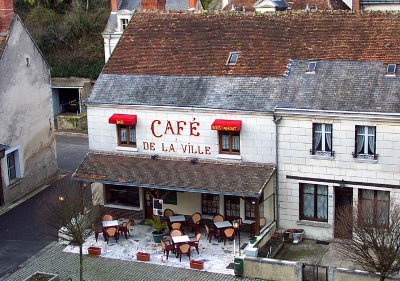 We walked on from the church along the high road to the entrance of the château. A man came out and called to us in French and then in English, saying we could take the tour en visite libre if we wanted to. Laurie said "Let's do it!" and we did. It was very interesting. Six or seven rooms on two levels were open to visitors, and they were full of 18th and 19th century furniture and lots of paintings. 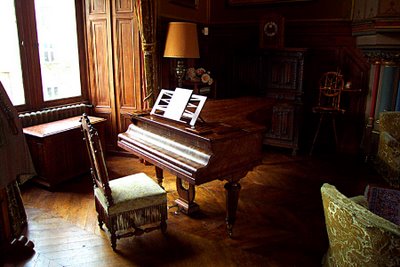 The piano at Montrésor is a 200-year-old Erard

But the best part was the piano — it is one that came from Paris and had been played by Chopin. The man from the entrance had come up at the end of the tour to show us the trésor or treasure of the Château de Montrésor — a locked room full of gold and silver platters, beer steins, coins, etc. He mentioned the piano, and I told him that Laurie is a musician. He insisted that she play the piano, and she did. It was beautiful -- she's quite accomplished. 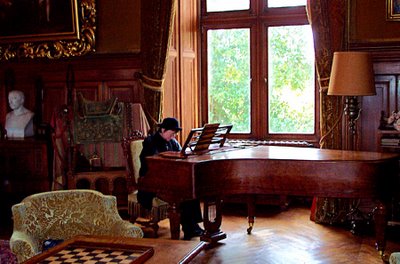 Laurie playing the piano that Chopin played and composed music on

The man of the château was genuinely impressed and was very happy to have her play it. Laurie was impressed to find that it had recently been tuned by a professional who had done the work for free, saying it was an honor to work on such a fine instrument.


If you want to see more pictures of the town and château, here's a posting about Montrésor from May 2006.
Posted by Ken Broadhurst at 08:38