Walt's been busy baking this week. A couple of days ago, he made an excellent quiche using some yellow summer squash that he put in the freezer last summer. 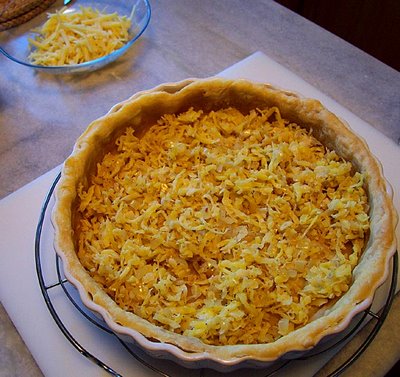 A pre-baked pastry shell filled with a mixture of sautéed summer squash and onions
To freeze the squash flesh, he grated it finely and packed it uncooked into a sealed plastic bag. After he took it out and thawed it the other day, he squeezed most of the water out of it with his hands. Then he cooked it for a few minutes in a frying pan on low heat with butter and a chopped onion, salt, and pepper. 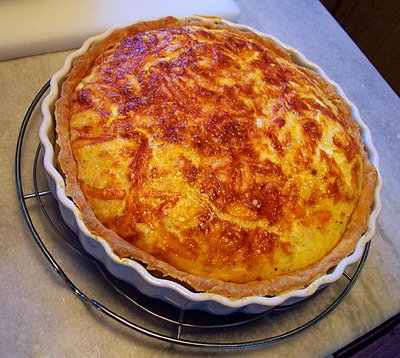 The quiche as it came out of the oven, all puffed up, golden, and tasty
The squash-onion mixture went into a pre-cooked pastry shell along with some grated comté cheese — you could used whatever cheese you wanted — and then was covered with a mixture of eggs and cream. It took about 5 eggs and maybe ½ to ¾ cup of cream (or milk). A pinch of nutmeg in the eggs gives good flavor, and some extra cheese sprinkled on top before baking gives the quiche a nice golden color. It spent about 45 minutes in the oven at 375ºF (190ºC).

* * * * *
Later, after a trip to the store to get some ground hazelnuts and other supplies, W. made a batch of Spicy Nut Bread that we had seen a chef on Cuisine TV make a week or so ago. Here's a link to the French recipe, called Gâteau Épicé aux Noix. And here's my translation: Spicy Nut Bread.

The ingredients are the ground hazelnuts, chopped walnuts, raisins, rum, butter, eggs, flour, baking powder, sugar, lemon zest, and spices — ginger, allspice, and cinnamon. The French recipe also calls for fromage blanc*, which I think you could substitute yogurt or sour cream for in the states. 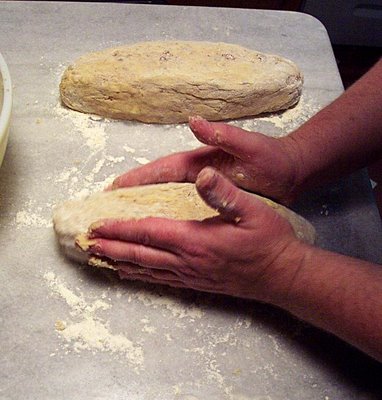 Shaping the nut bread dough into loaves
The French recipe doesn't mention kneading the dough, but on the TV show Eric definitely kneaded it for a while, very gently, before he shaped it for baking. 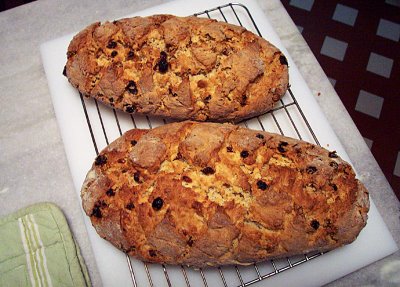 Spicy nutbread loaves cooling on a rack
After the loaves cooled, we sliced them and ate them like that. No complaints. 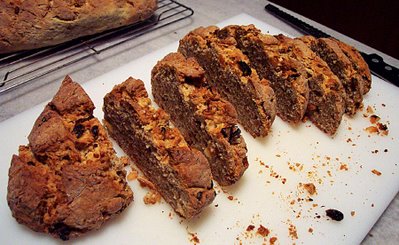 The cooled loaf sliced
It was obvious that this was actually a recipe for biscotti, however. I've never seen biscotti (which are Italian) in France, though I'm sure you can buy them in Paris and other cities. Walt used to make biscotti at Christmastime when we lived in San Francisco.

Walt cut up the second loaf and put the slices in a slow oven for 30 minutes or so to dry them out. Sure enough, we ended up with biscotti. I think the nut bread is even better this way because the walnuts and ground hazelnuts have a toastier flavor, and the raisins are sort of candied. 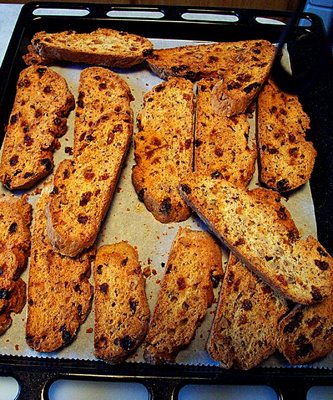 * Fromage blanc, according to my Larousse Les Fromages book, is a product obtained by slow coagulation of whole cow's milk with rennet at 15ºC for 24 hours. It can be eaten with sugar (for breakfast or dessert) or flavored with herbs and spices (as a dip, for example). It's always available in French supermarkets, and I paid one euro for a litre at SuperU the other day. Plain fromage blanc has a slightly sour taste and the texture of yogurt or sour cream.