Well, teapots come to mind. That storm front moved through so fast yesterday that it was over almost before it got a good start.

The Chaîne Météo said wind gusts of 104 kph were recorded at Châteauroux, which is about 50 miles SE of us, and gusts of 109 kph were felt at Angers, 100 miles west. We don't have an anemometer, but I estimate we had 50 mph — say 85 or 90 kph — gusts here. The trees were bending and swaying, but no big branches broke off, and nothing was uprooted.

The local newspaper, La Nouvelle République, says winds at the top of the Eiffel Tower were clocked at 137 kph yesterday. That's about 85 mph, but it's also 1000 feet above ground level. Elsewhere in Paris, a man was killed on the Boulevard de Strasbourg (10e) when a big advertising billboard blew down and fell on him. 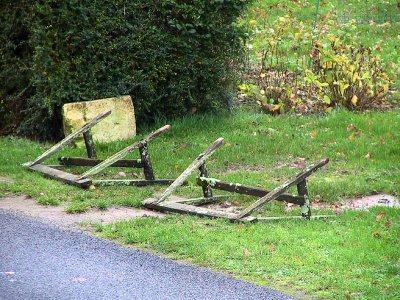 The neighbor's sawhorses blew over in the storm.
The good thing is that we brought in nearly everything we found outside that could have been carried away by the winds, so we didn't have any damage. And we kept all the storm shutters on the west side of the house, which bore the brunt of it, closed until noon. That's when the winds started dying down. We didn't want anything to come crashing through a window. A tree, for example.

It's nice having storm shutters. Why is it that in the U.S. so few houses have them? 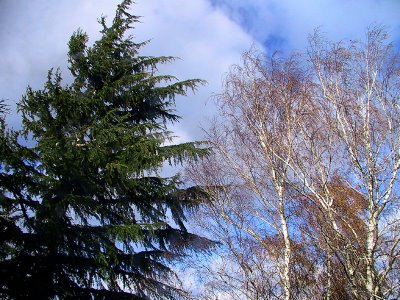 When the winds went calm, our spruce and birch trees were still standing.
Today is market day. I need some mushrooms for today and a cabbage for tomorrow. I'll get something from Mme Doudouille — maybe some of her good smoked sausage to eat with the cabbage tomorrow. I have onions, carrots, potatoes, and bay leaves. Planning meals, as usual...

* * * * *
I don't talk about politics here, French or American, but I'm following along with current events.

It is astounding that the hard-core American establishment, in the form of a commission with respectable, experienced members like James Baker, Lee Hamilton, Alan Simpson, Vernon Jordan, Leon Panetta, Sandra Day O'Connor, Charles Robb, Lawrence Eagleburger, and for God's sake Ed Meese, have had to get involved to try to get control of W's administration and war policies.

George H.W. Bush, the old man, is hovering in the background, officially silent down there in Houston. The Iraq Study Group's report is what might be called an "intervention", don't you think? Almost a coup d'état. This is a very sad and very dangerous situation, with the Democrats about to take over the Congress and confront a stubborn man of limited abilities, wearing blinders, camped in the White House.

In his Washington Post op-ed column yesterday, E.J. Dionne said the Bush administration's rush to war without adequate planning, failure to cultivate a broad group of allies to help rebuild Iraq after the initial invasion, and decision not talk honestly to the American people about the large, if not impossible, task it was foisting off on us were signs of the administration's "reckless arrogance — or, to be more charitable, simple foolishness."

They used to say: "Mistakes were made." Now we can say: "Tremendous damage has been done." To the U.S., to Iraq, and to the world. Sadly, to American ideals and our country's standing internationally.

OK, back to life in Saint-Aignan now.
Posted by Ken Broadhurst at 08:31