Yesterday morning as I was posting some pictures I took in springtime nearly two years ago, the weather was putting on a wintertime show outside our house. 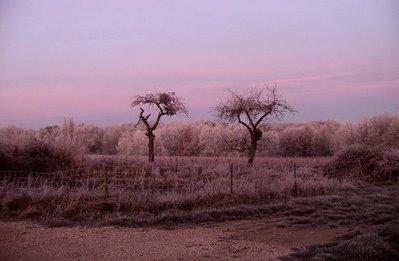 View over the Renaudie vineyards, 29 December 2006, 9:00 a.m.
I went upstairs and opened the shutters on the kitchen window at about 8:30 and saw that the sky was clear for the first time in nearly a week. The fog was gone and there were patches of blue. There was, especially, a pink sunrise glow instead of the dull gray we had gotten used to. 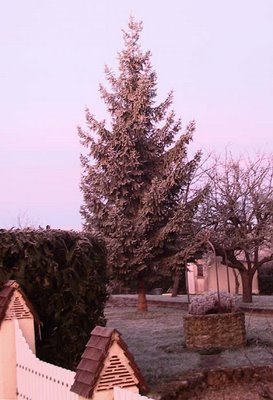 Our frosty back yard
[Click on the pictures to enlarge them.]
The sun was coming up and everything white had a pink hue. The trees and grass were all covered in a heavy frost. The last of the overnight fog had crystallized on everything available. 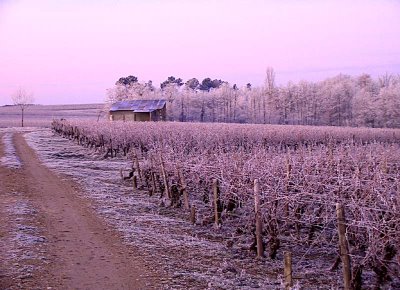 The road out into the vineyards at sunrise on a cold December morning
The temperature was probably 25ºF but I grabbed my camera and ran outdoors to take some pictures. There was no wind so I could stand being outside without a coat for a few minutes. 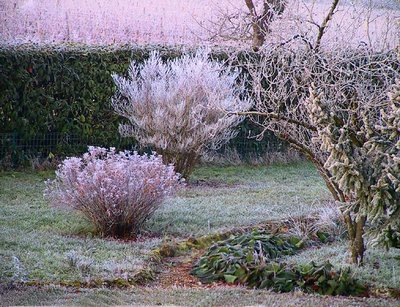 Frost and frozen plants out in our back yard
A few hours later, the temperature started rising really fast. By early afternoon, it was up to about 45ºF and all the ice had melted. This Saturday morning, the temperature outdoors is 8ºC, compared to the -4ºC we had 24 hours ago. That's more than twenty fahrenheit degrees warmer. 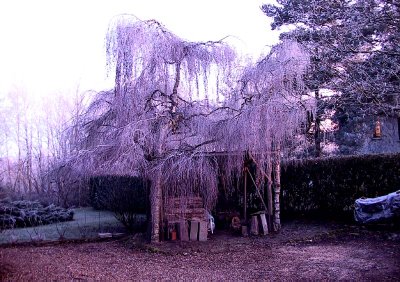 Out front, the carport/woodshed is sheltered by an icy weeping birch tree
The large high pressure area that had been sitting over northern Europe, north and east of us, and pumping icy Scandinavian air down over the northern half of France, moved off to the east yesterday. A rainy warm front then started moving in off the Atlantic, bringing showers and temperatures in the 50s F to the Brittany and Normandy coastal areas. 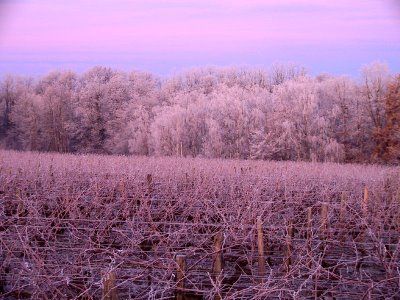 The frosty vineyards bathed in pink sunlight
This morning it is windy. I can hear the gusts, but I haven't opened any shutters yet. It's 7:15 and the sun doesn't come up until about 8:30. It's supposed to rain later, maybe by noontime. 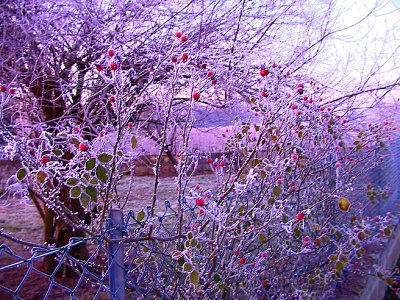 Icy rose bushes along the fence at Mme Simonnet's house
I'm glad it has warmed up but I would like the rain to hold off long enough for me to go to the outdoor market in Saint-Aignan this morning. I'm looking for some saucisses de Toulouse — Toulouse-style sausages. They're just pork, salt and pepper, and maybe some garlic, and I like them. I want to cook them on New Year's Day to go with my black-eyed peas, along with the duck legs I bought yesterday. 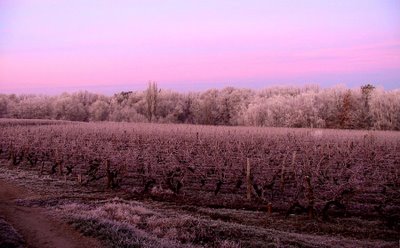 The Renaudie vineyards with woods behind
It's good luck to eat black-eyed peas on New Year's Day, you know. Not that I'm superstitious or anything. 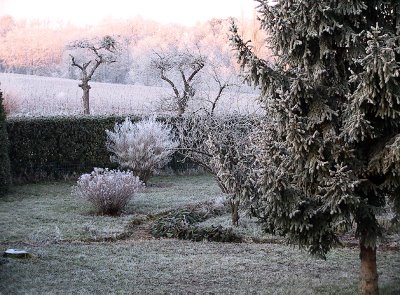 Our frosty back yard with the vineyards just over the hedge
By the way, there's a house for sale at La Renaudière (our hamlet). Mme Simonnet, who is 94 years old now, has moved out of her house and into a retirement home. Her son and daughter, who live in Paris, have decided not to keep the house, which is just across the road and behind ours. It faces the little pond out back and has sweeping views out over the vines. 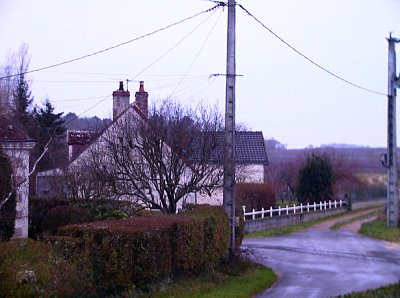 Mme Simonnet's house seen from one of our back windows
I'll be interested to see what the asking price turns out to be. I know the real estate agent who is doing the appraisal, so I'll be able to find out pretty fast. And I'm sure I'll get to see the inside of the house. It's hard to tell how big it is from the outside, but you can tell it is pretty old.

It started raining a few minutes ago so I'm not sure about the market trip now.