Can you believe it? I can't. I guess the fact that we spent the month of October in the U.S. has something to do with it. 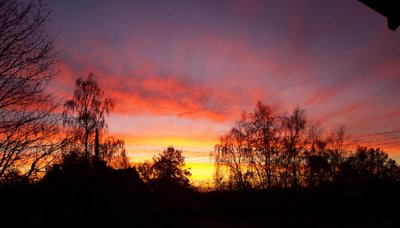 Sunrise, 8:00 a.m., 01 December 2006, at La Renaudière
The weather is a factor too — northern France is having its warmest autumn since 1950, according a report I heard on the radio the other day. It was much colder at this time last year, that's for sure. Though the low this morning was about 38ºF, so the cold weather is coming. But we are supposed to have a mild weekend, with more rain. 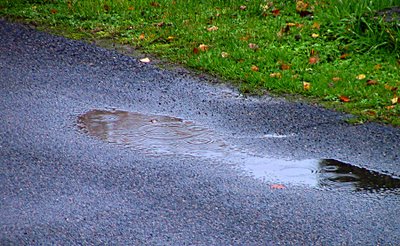 A November puddle on the rue de la Renaudière
Back in the 1970s when I lived in Paris, they used to say that landlords would turn on the heat in apartment buildings on October 15, whether you needed heat or not. Mostly you did. And then they would turn the heat off on April 15, whether you still needed it or not. And often you did. 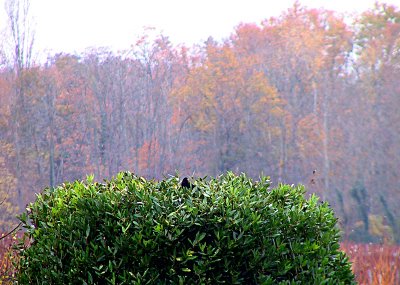 A blackbird sitting in the top of our bay laurel tree, with fall colors
Earlier this week I took all my succulents and houseplants outdoors and cleaned up our little sun porch for the winter. I will eventually need to bring in all the outdoor plants that can't take frost, and I needed to make room for them. But this week I left even the houseplants outdoors for about 48 hours, hoping it would rain and water them for me. It just sprinkled a little and the temperature didn't go down below 45ºF. 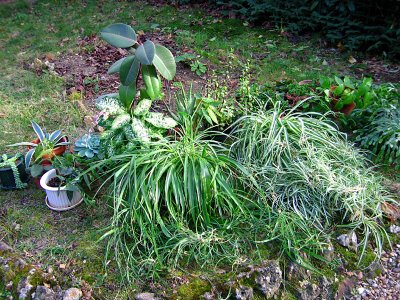 Houseplants getting some fresh air on a late-November afternoon
We've been turning our heat on in the morning and leaving it for two or at most three hours. But then the house is almost too warm, so we turn the heat off. Late in the afternoon, if it's a little chilly, we either turn the boiler on again for an hour or two to get the radiators warm for the evening, or Walt builds a fire in our new wood stove. The wood stove is going to be really nice this winter, and wood is much less expensive than fuel oil. 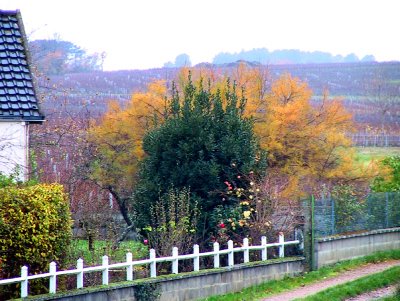 Recent view out our bedroom window past the neighbor's yard to the vineyards
I see on CNN this morning that a big snowstorm blew across the U.S. Plains States and the Middle West overnight. I wonder when we will get our first snowflakes this year. I do need to get the geraniums in this weekend. 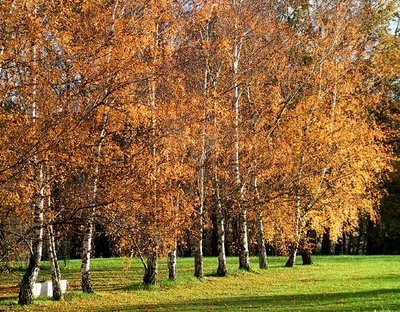 I just looked at weather.com to see what's going on in Champaign-Urbana, Illinois. That's the last place we stayed in the U.S., early in November. Well, our friends there didn't get the worst of the big snowstorm, it appears. Still,they are supposed to get two to four inches of snow before noon on Friday, and the winds are supposed to be howling. Then the temperature will drop to -8ºC by Saturday morning — that's 18ºF, very cold compared to what we are used to here in the Loire Valley.
Posted by Ken Broadhurst at 10:08