Not long ago, a friend from America came to visit. He wanted to eat ham and cheese sandwiches with mayonnaise on sliced bread, American style. He liked the bread, the mayonnaise, and the ham he found at the Intermarché supermarket in Saint-Aignan.

What we call Swiss cheese is an American version of several different cheeses that are made in the Alps in France and in Switzerland. The best known is Gruyère, which is sometimes used as a generic term in French to describe these Alpine cheeses. Gruyères, by the way, 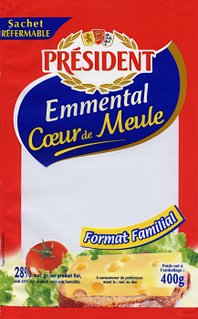 is a small town in Switzerland where the famous cheese was first made and is still made today.

Another cheese that is similar to Gruyère is Emmental, which was originally made in Switzerland but is now made in France as well. The Alpine cheese I like best is called Comté, which is made in the area called Franche-Comté in France, near the border with Switzerland. Another cheese variety in this category is called Beaufort. It's made a little further south, in the high Alps.

Notice that the comté cheese that came in the green wrapper is an A.O.C. product. That means it is made in a very specific region by very specific methods using milk from cows raised in that region.

The strict standards are designed to protect the quality and reputation of Comté cheese, which has been made in the Franche-Comté province since Roman times. It's not made in a factory somewhere the way a lot of American "Swiss" cheeses are. And it tastes it.

The situation is the same with what Americans off-handedly call "French bread." Sunday afternoon I went to buy bread (no bread lady delivery on Sunday, and none on Monday because it was December 25) at a local boulangerie called Robert.

Which "French bread" would you buy after looking at the list below? 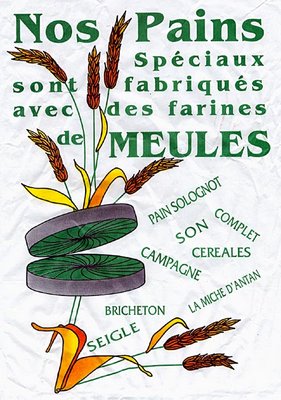 If you want to know what bread to serve with what course or dish you are treating your family or guests to, you can consult this list. 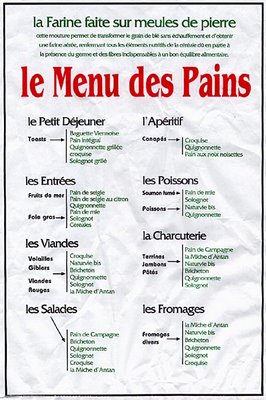 The Robert publicity specifies that the bread is made exclusively with stone-ground flours and grains (farines de meules or farine faite sur meules de pierre).

Want some Swiss cheese on that French bread?

P.S. In the rush and commotion of getting dinner on the table yesterday afternoon, I neglected to take any pictures of the poached turkey after it was browned in the oven. Needless to say, it looked exactly like a roast turkey. And the meat was good. It wasn't dry, and it had picked up subtle flavors from the aromatics and spices I put in the poaching broth. I made a cream gravy using the broth and added a pinch of curry powder to liven it up.
Posted by Ken Broadhurst at 08:33