Our neighbor, who is the mayor of our village (pop. 1,100), and her husband, a retired banker, are celebrating their 50th wedding anniversary this weekend. They obviously had a party last night that broke up in the wee hours — a lot of cars drove by between two and four this morning, with their headlights casting unaccustomed patterns of light and shadow on the ceiling of the loft where we sleep. Today and tomorrow we're invited to go over to the mayor's for lunch. She is bringing in a food truck to feed a crowd of 50 or more guests. That should be interesting. 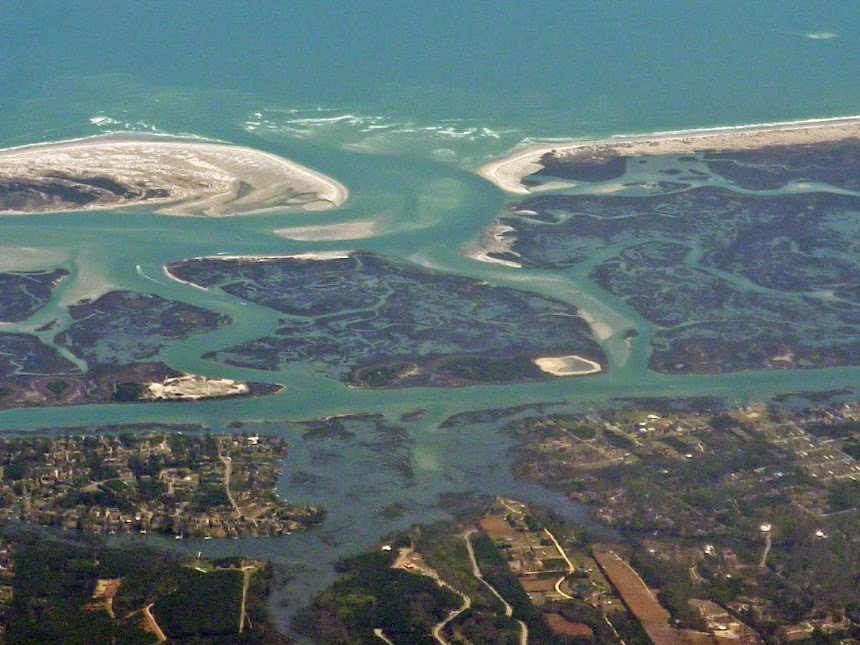 Meanwhile, here are a couple of aerial photos, taken from the windows of a plane, showing the barrier islands and inlets that characterize the North Carolina coast. Inlets are breaks in the string of barrier islands that let water flow between the sounds and the ocean. I believe they are all natural, not man-made. Strong winds and ocean currents can silt them shut or carve new inlets through the islands. 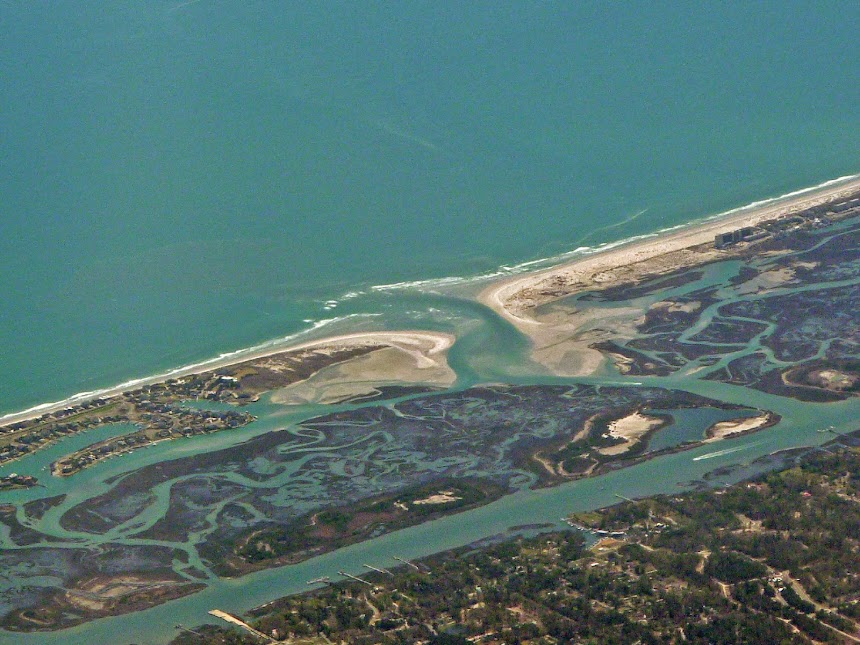 I don't know which inlets these are, but they have to be southeast of Morehead because I was flying out of New Bern, to the north, on the way to Charlotte, to the west, and from there back to Paris to catch the train to Saint-Aignan. 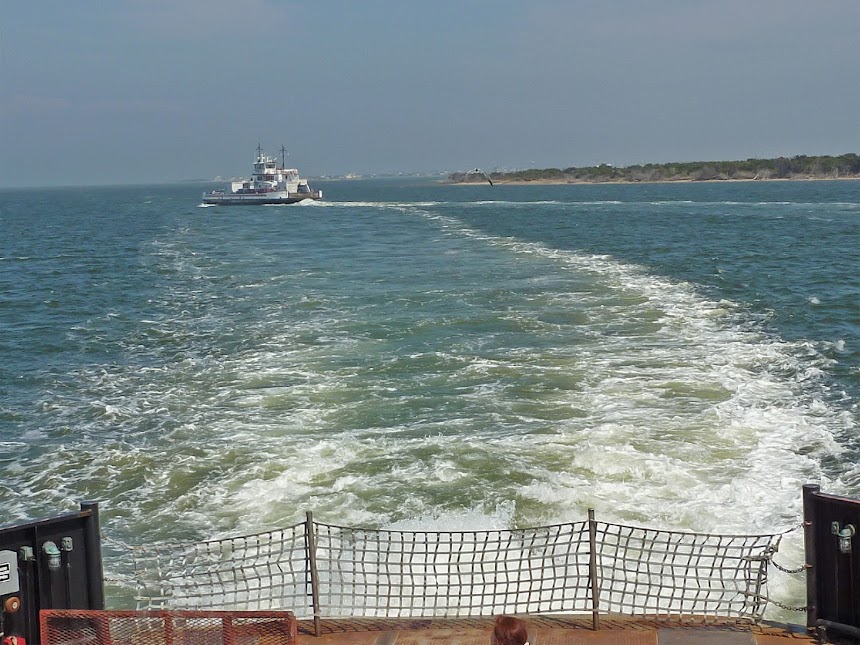 To cross the inlets just north of Morehead, you have very few choices: your own or a hired boat, or a car ferry to or from Ocracoke Island (pop. 800). It takes two-and-a-half hours to get to Ocracoke from Cedar Island, which is at the eastern end of Carteret County. North of Ocracoke is Hatteras Island, a forty-five-minute boat ride away. 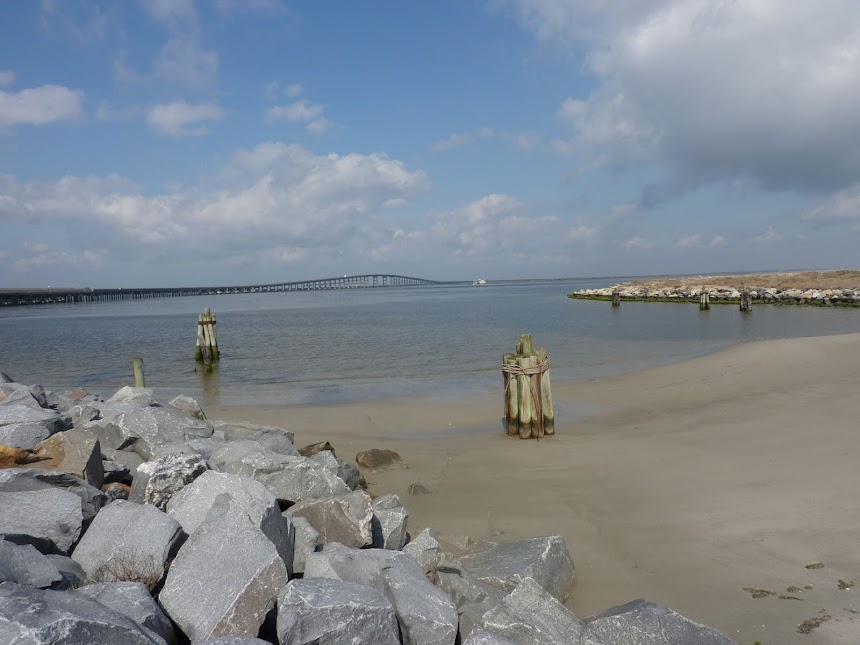 Farther north, near Nags Head (pop. 3,200) and Manteo (pop.1,600), you can cross Oregon Inlet by high-rise bridge. Manteo is on Roanoke Island (total pop. 6,750), which is where in the year 1585 the English attempted to establish a settlement in North America for the first time. (There were already 10 or 12 Spanish inland settlements in the Carolinas by then.) Women and children were brought over in 1587. Later that year, the governor of the colony left his 100 or so colonists there and sailed back to England for supplies. By the time he returned in 1590, all the colonists had vanished. Still today, nobody is sure what became of them. The more successful Jamestown settlement in Virginia would be formed 25 years later. 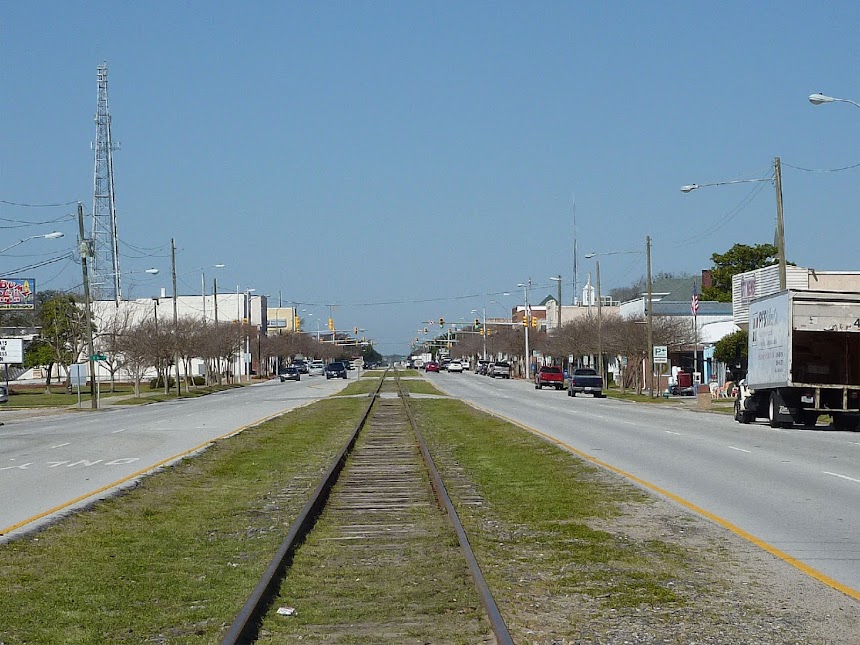 In Morehead, you used to be able to take the train up to New Bern and on to Raleigh or Charlotte. There are no passenger trains out of or into Morehead these days, but a single freight train, I believe, rolls through town at 15 miles per hour headed to the port terminal five times a week.
Posted by Ken Broadhurst at 07:14