It was hot again yesterday — 31ºC, very high 80s in ºF. We spent the day straightening up the house and then preparing foods for our early evening apéritifs. Our guests were our next-door neighbors, who we knew but only enough to say bonjour to them when we saw them outside. The woman (M-P) who officially owns the house, which she inherited from her father, lives and works in the small city of Nevers, 2½ hours east of Saint-Aignan. She seems to be spending more and more time here these days. The other guest was her mother. M-P's parents divorced many years ago. 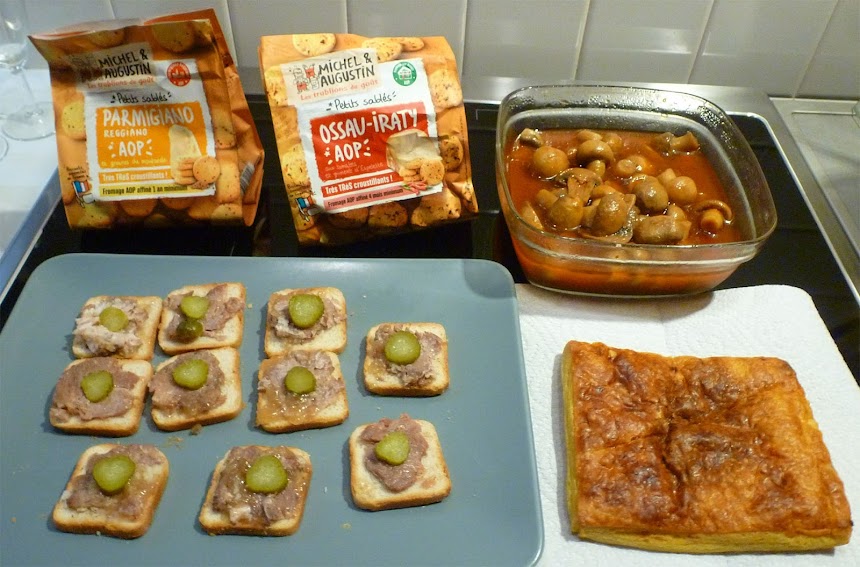 Above is some of the food we had. Bottom left are some canapés made with the terrine de jambonneau I described in yesterday's post. We sliced a pickle into rounds and stuck one on each little piece bread that we had spread the pâté on. Behind those are two packages of savory "cookies" that Walt bought at the supermarket. One is flavored with Parmesan cheese, the other with Basque country Ossau-Iraty cheese that's made with ewes' milk. We also had some champignons à la grecque that I made. They're flavored with tomato, shallot, garlic, white wine, oregano, and lime juice. 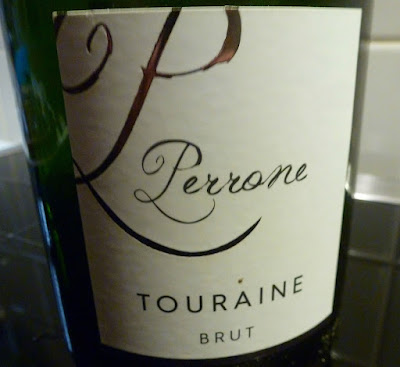 Finally, bottom right above, is what is called a galette de pommes de terre, a cake of puff pastry made with mashed potatoes added to the dough. It's a local specialty, and we sliced it into little bite-sized squares and ate it as finger food. We also had canapés made with tomates confites (a kind of flavored tomato paste that Walt bought at the supermarket) and topped with a little square of feta cheese. Those were really good. Today, we're going to have a buffet of the leftovers as our lunch — we made much too much food for last night, even though E and M-P were here with us for two hours.

The conversation flowed freely, and we enjoyed it. Since E and M-P first came to live in this hamlet in the mid-1980s, we learned a lot about its history. It didn't hurt that we had a nice bottle of local sparkling wine to wash down all that food. It's called fine bulles de Touraine (tiny bubbles from Touraine) and is made with Chenin Blanc and Pinot Noir grapes. We almost always have a few bottles of it in the cellar (about six euros a bottle — a steal). E kept saying how good it was. She and her daughter said they planned to go buy some soon.