Yesterday at noontime a delivery van drove up to our front gate and the driver tooted his horn. He had brought us a mystery package. We were expecting a package toward the end of next week, so we thought maybe it had come early. But we were in for a surprise when we opened the mystery package. Here's what was inside. 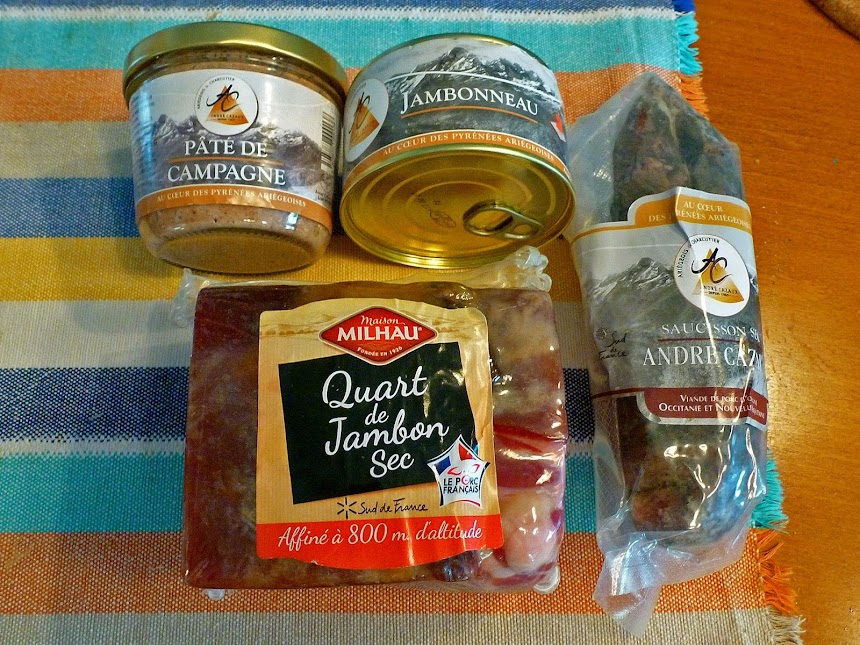 These gourmet treats turned out to be a gift from our friends Jill and Peter in California, who spent five nights with us at the beginning of the month. They are charcuterie specialties (pork products) from southwestern France — the foothills of the Pyrenees mountains. They are, clockwise from the top, a tin of terrine de jambonneau (ham hock pâté); a saucisson sec (a salt-cured and air-dried sausage); un quart de jambon sec (a piece of salt-cured ham); and a jar of pâte de campagne. We will enjoy all of them over the next few weeks. And since this evening we are having some neighbors over for an apéritif (a glass of wine and some finger foods), you can be sure that some of these delicacies will be enjoyed by all.

There was no gift card, and there was no indication on the shipping label concerning who had sent the package. There was a telephone number for a company called jemangefrancais.com, however, so I called it. I told the man I got on the phone that I had received a package from his company, and I wondered if he could tell me who had sent it. I gave him my name and the tracking number on the box. After a short search, he said the only information he could give me was that the purchaser was a person named Jill — he pronounced it [djeel]. That was enough information for me, and I sent Jill an e-mail to thank her and let her know the package had arrived.
Posted by Ken Broadhurst at 06:56