Yesterday, I had my deuxième rappel or quatrième dose of the Covid19 vacccine. Un rappel is a booster shot. I got the injection at the pharmacy I've been going to in Saint-Aignan for the past 19 years. This time I got the Pfizer vaccine that carries the Comitaty brand name and is produced in Germany. My arm is pretty sore this morning and my shoulders are stiff and achy. I don't know if I'll need a fifth dose later this year or next.
I'm sure you've heard that all-time record temperatures were recorded across much of the United Kingdom yesterday. Temperatures as many U.K. locations hit 40ºC, which is 104ºF, and it was also that temperature in Paris yesterday afternoon. The highest temperature ever recorded in France was 46ºC (almost 115ºF) a few years ago, in the South of France. Here in Saint-Aignan, the day started off hot but afternoon temperatures didn't get much above 35ºC. Still, that's 95ºF, which is scorching hot for our location. I just heard on the news that the high temperature yesterday afternoon in Rouen was 41ºC. I lived and worked there for a year, and I've spent a lot of time there over the years. Rouen has always been famously damp and chilly, and has been called le pot de chambre de la Normandie. Le monde change de peau... 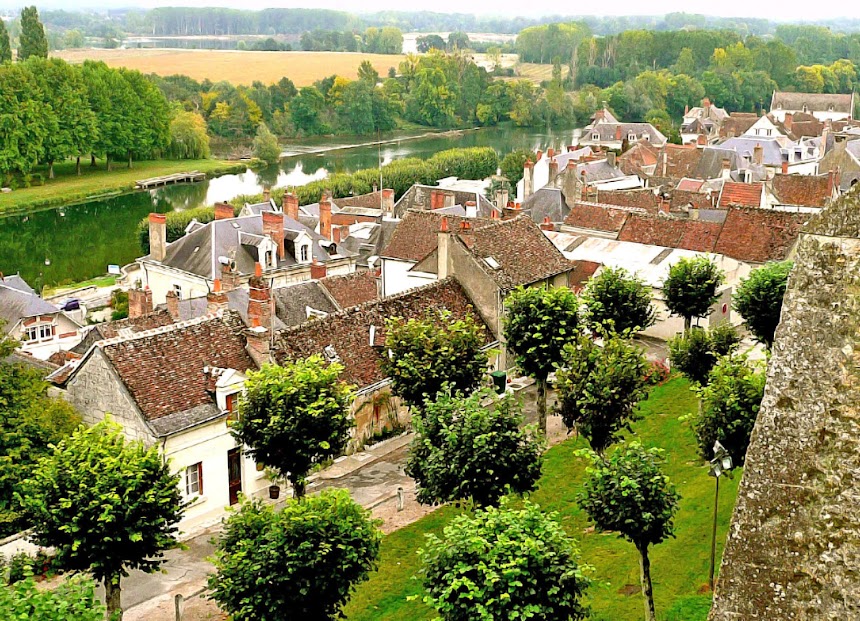 The Cher river at Saint-Aignan seen from the château
The wind shifted yesterday afternoon and brought higher levels of humidity, meaning the afternoon and evening felt pretty muggy. Around 2 a.m. a series of thunderstorms began passing though, with sharp lightning near us and loud crashes of thunder. Luckily, we don't seem to have had any or much hail in the hard downpours of rain, because I don't see any signs of damage. It's just starting to get light outside, so I'll go have a look around in a few minutes.

If we continue having hot weather through August and September, I'm going to be thinking a lot about having some kind of air-conditioning installed in our house here. But it's a real dilemma, because one reason the climate is getting hotter and hotter is that more and more houses are air-conditioned to one extent or another. A quarter of France's houses and apartments now have some sort of air-conditioning (climatisation is the French term), while only about one-half of one percent of the U.K.'s house have AC. It's a cercle vicieux, I think. The more the world gets air-conditioned, the more it will need air-conditioning. We can't win that battle.
Posted by Ken Broadhurst at 06:51