Happy New Year's Eve to all. For our New Year's Eve celebration, we've decided to make a big pan of paella, the Spanish rice, chicken, and seafood dish. Instead of chicken, we'll have salmon with ours, along with mussels, cockles, shrimp, and a Portuguese chorizo sausage. The vegetables are onions, tomatoes, green and red bell peppers, artichoke hearts, and chickpeas. This is my own recipe.

Below are some photos showing mostly paellas I've made in past years, plus two photos of huge pans of paella that are often on display in French outdoor markets. The market paella is sold by the portion in plastic containers as carry-out food. The first photo at the top is one I took at a market in Paris, and the last on at the bottom is one I took at the Sunday market in Amboise. (I've put a recipe in the comments — in French and then in English.) 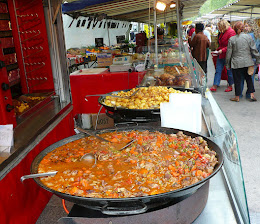 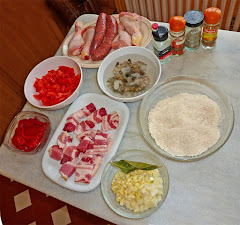 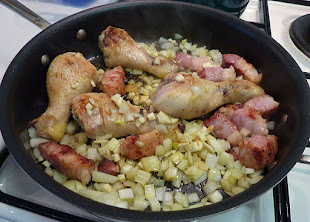 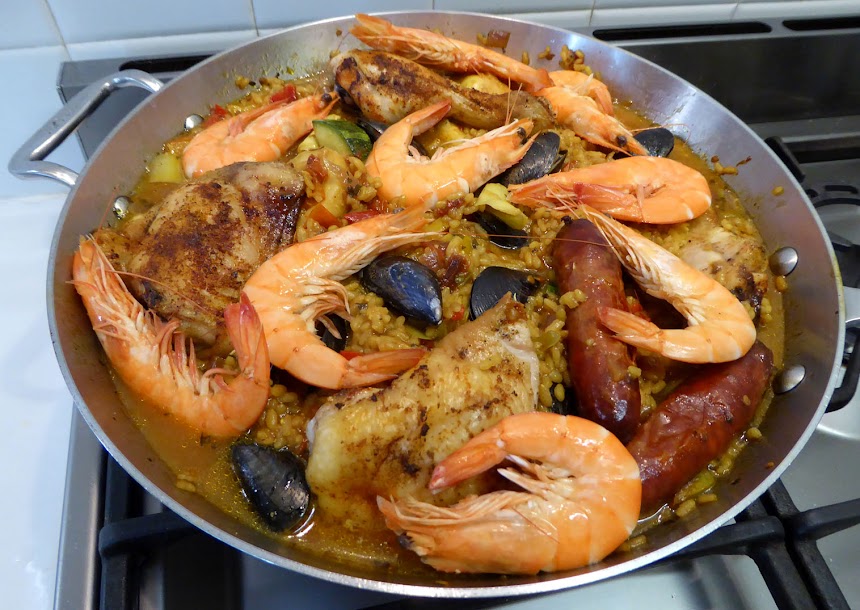 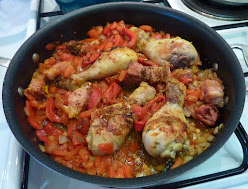 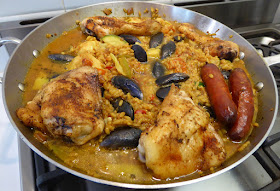 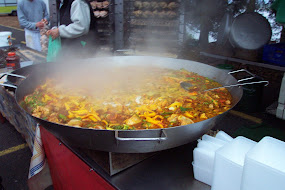 Tomorrow, on New Year's Day, I'll be cooking a pot of black-eyed peas — traditional January 1 fare in the U.S. South. We're going to be having the black-eyed peas with poached saucisses de Toulouse (plain pork sausage) and with cuisses de canard confites — duck leg-and-thigh pieces that have been slow-cooked in duck fat. All you have to do is put the duck pieces on a rack in the oven and heat them up until they are golden brown. I'll probably take pictures of both today's paella and tomorrow's sort of "mock cassoulet" made with black-eyes. Stay tuned.
We won't be having guests for either meal. The current Covid Omicron surge means we are still self-isolating as much as possible. In urban areas, people are required to wear masks indoors and outdoors. Shopping is a necessity, but gatherings of people indoors are strongly discouraged by the authorities here in France. We haven't yet had our Covid booster vaccinations, but mine is scheduled for next Thursday morning. We'll be getting the Moderna vaccine for our third dose. Walt expects a call from the pharmacy any day now to get his appointment set up. I'm already hearing about some people here getting a fourth dose of the vaccine...
Posted by Ken Broadhurst at 06:21