Yesterday we cooked and ate the last of our Thanksgiving leg of lamb leftovers. We had one package of cubed lamb meat, totaling about 400 grams (less than a pound) in the freezer. Walt ran the lamb cubes through the meat grinder. I diced onions, celery stalks, and carrots to flavor a meat sauce, using tomato puree from last summer's vegetable garden. The final product was to be Greek-style moussaka, with eggplant and topped with sauce mornay (cheese sauce). 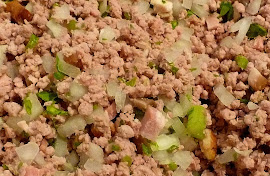 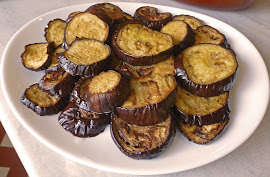 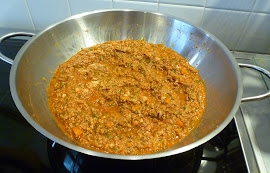 The photos above show the ground (minced) lamb mixed with diced aromatic vegetables; eggplant slices
that I brushed with olive oil and baked in the oven; and the finished meat sauce. 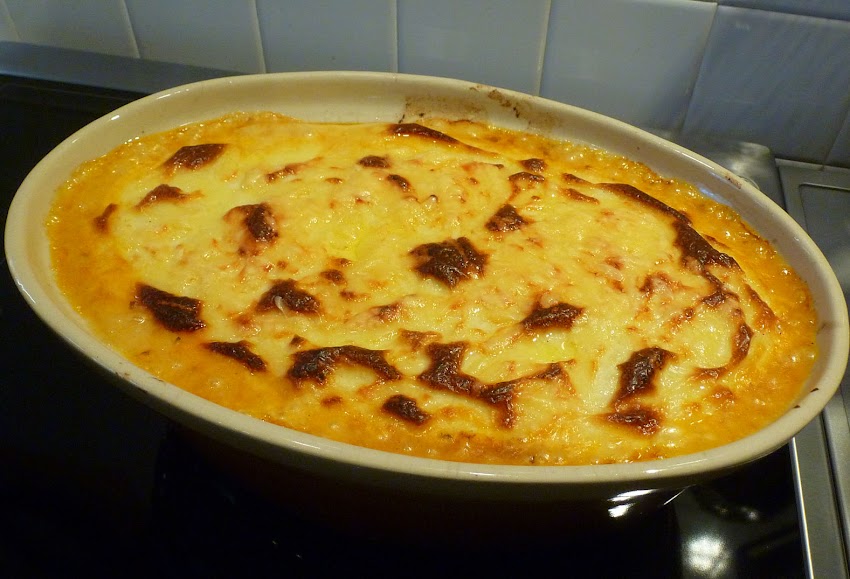 Here's what the moussaka looked like when it came out of the oven. 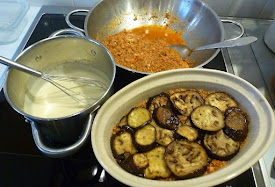 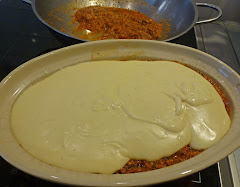 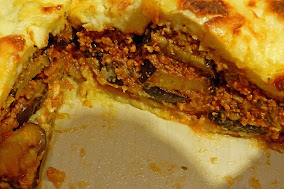 Just above you see the major components of the moussaka, which is a layered gratin (casserole); the moussaka assembled with the cheese sauce poured over the top; and the layers of the finished, baked moussaka.

For the cheese sauce:
4 Tbsp. flour
4 Tbsp. butter
2½ cups milk
Salt, pepper, nutmeg
1 egg yolk
2 oz. Swiss cheese or cheddar, grated
Cut the eggplants into rounds ¼ inch thick. Put the slices in a colander, salt them generously, and let them disgorge or “sweat” for an hour.

Meanwhile, peel the (optional) potatoes and cut them into thin slices. Optionally, peel the tomatoes.

Make the meat sauce: In a skillet or wok, cook the chopped aromatics in olive oil until they’re transparent and starting to brown. Add the ground meat (lamb, beef, turkey, etc.) and season it with salt, pepper, cinnamon, and nutmeg. Let it cook for about 10 minutes, stirring frequently. Then add the chopped tomatoes (or puree), herbs, the (optional) red wine, and the tomato paste.Cook it all cook together for 15 minutes longer, until nearly all the liquid has evaporated. Set it aside.

After an hour, rinse and pat dry the eggplant slices. Arrange them in a single layer on a baking sheet brushed with olive oil. Brush the tops of the slices with olive oil as well. Put the baking sheet in a 400ºF/200ºC oven for 10 to 15 minutes, until the vegetables are softened and starting to brown. Do the same with the sliced potatoes. (If you prefer, you can cook the eggplant and potato slices by batches in a skillet with olive oil instead of in the oven.)

Make the cheese sauce: In a separate pan cook the flour in melted butter (or in olive oil) for a minute or two, and then gradually stir in the milk (+ some cream if you want it richer) until you have a very thick, creamy sauce. Add salt, pepper, and a pinch of nutmeg. Off the heat, stir in the (optional) egg yolk and the grated cheese.

Put the moussaka together: If using, put the pre-cooked potato slices in a layer in the bottom of a baking dish. Then put on a layer of pre-cooked eggplant slices (half the total you are using). Spoon half of the meat sauce over all. Put on another layer of eggplant slices and another layer of meat sauce. Finally, pour the thick cheese sauce over the top and smooth it out with a spoon or spatula.

Cook the moussaka: Set the baking dish in the oven at 350ºF/180°C for 45 minutes. After about 20 minutes, sprinkle grated cheese over the top and let it melt and turn golden brown. Take the cooked moussaka out of the oven and let it rest at room temperature for at least 10 minutes before you serve it. It’s good accompanied by a green salad dressed with vinaigrette.
Posted by Ken Broadhurst at 06:20