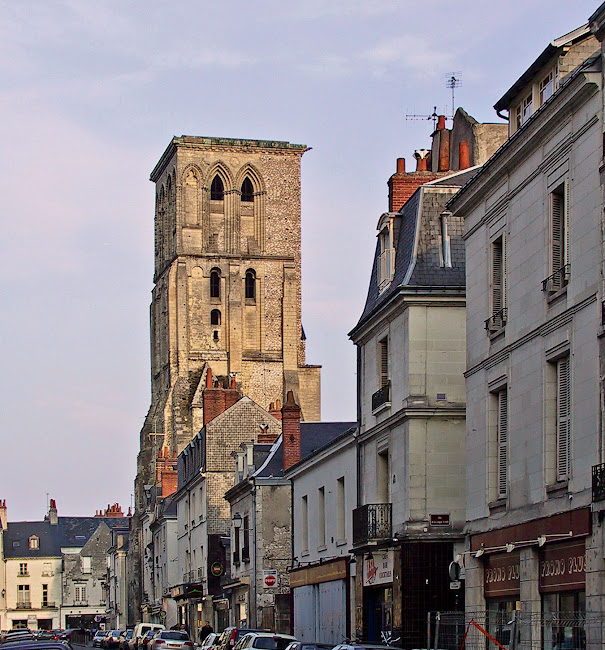 There's a lot of truth in the old observation that people tend to neglect the sites and signts they live closest to and pay more attention to sights and attractions that are farther away. They take the nearby sites for granted, telling themselves that they have plenty of time to go see them... someday. I wonder how many Parisians have never been to the top of the Tour Eiffel? I know that Walt and I lived in San Francisco for more than 15 years, and Walt never went to see Alcatraz island and the prison on it. I only went there once, and that was because I was involved in a work event there. I didn't choose it; it was imposed on me. 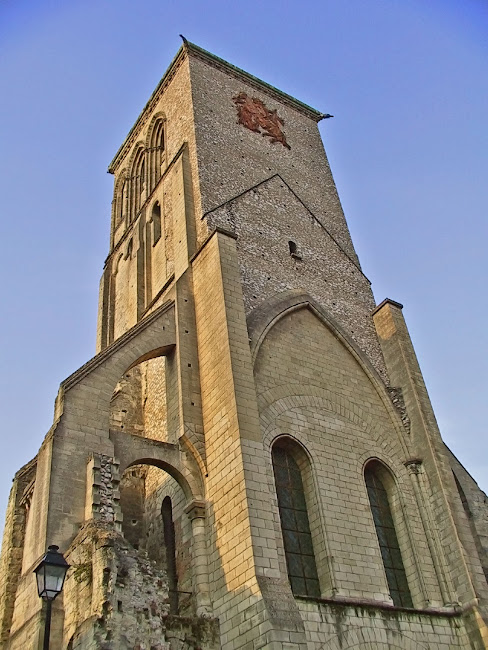 I'm beginning to feel that way about the city of Tours, which is only 35 or 40 miles downriver from Saint-Aignan, on the Cher river. Yesterday I posted photos of the cathedral in Tours, which I've really only glanced at once or twice. Tours (metro. pop. more than 350,000) is the biggest city in the French Région Centre-Val de Loire — bigger than Orléans or Blois or Bourges. It's a university town, so the population is young. Its location has been occupied for more than two thousand years. Back then, the Celtic (des Gaulois) people who lived there were known as the Turones. That's where the name comes from.

Two ancient towers (tours in French, a funny coincidence) dominate the part of the city called Le Vieux Tours. They are vestiges of a grand basilica that stood in Tours from the 11th to the 18th century and was dedicated to the 4th century saint named Martin de Tours, who brought Christianity, grape-growing, and wine-making to France. 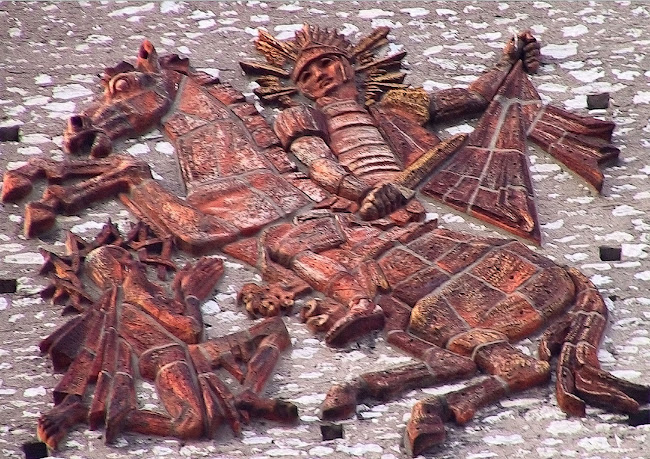 The tower in the first three photos in this post is called the Tour Charlemagne. It has that name because one of Charlemagne's wives died in Tours in the year 800 and she was buried there. Nobody knows, however, exactly where her tomb was located. Charlemagne (b. 748 - d. 814) visited Tours several times over the course of his life. I just learned that it was in Tours that Charlemagne signed an order making "rustic Latin" the official language of his empire, replacing "church" Latin. That can be seen as the birth of the French language. 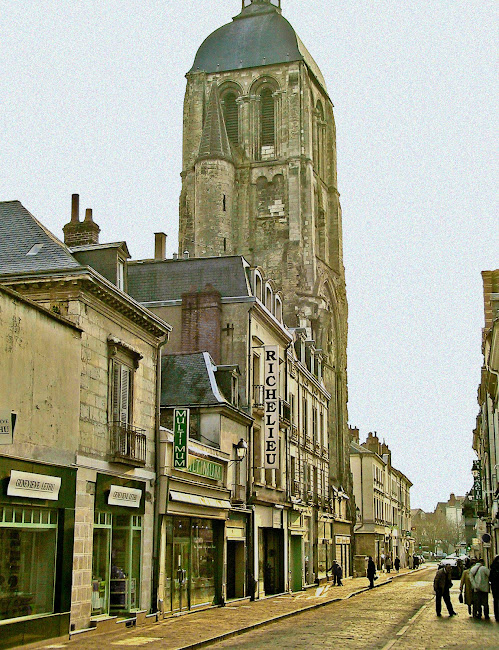 The other ancient tower in Tours is called the Tour de l'Horloge — the clock tower. You can see the clock in the last two photos in this post. It was also part of the grand basilica that once stood on this site and in which the saint Martin, bishop of Tours, was buried. That basilica was built in the 11th century after the Vikings razed an older basilica in Tours. During the 16th century wars of religion pitting Protestants against Catholics, the "new" church was ransacked and pillaged by the Protestant Huguenots. It stood abandoned, fell into ruin, and finally collapsed at the time of French Revolution.

I took all these photos in March 2006, less than three years after we moved to Saint-Aignan from San Francisco. Now we'll soon have been here for 19 years. 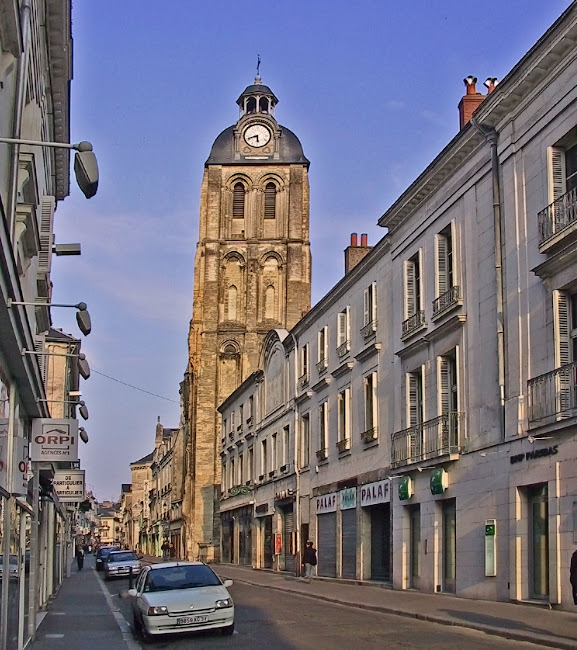 The Tour de l'Horloge, known back then as the Tour du Trésor, remained standing. It was fitted with a dome in the 19th century. The Tour Charlemagne partially collapsed in 1928 and was restored — the Guide Michelin says of the Charlemagne tower: elle ne manque pas d'allure (it has a certain elegance). Both of these towers are about 50 meters (165 ft.) tall. It seems that both of them were built in the 13th century.

Walt and I sometimes talk about what we'll do as we get older and older. The idea of moving to a city is attractive. Our house here in Saint-Aignan is built on three levels, with two staircases. One of them is very steep and narrow, and is starting to feel dangerous. 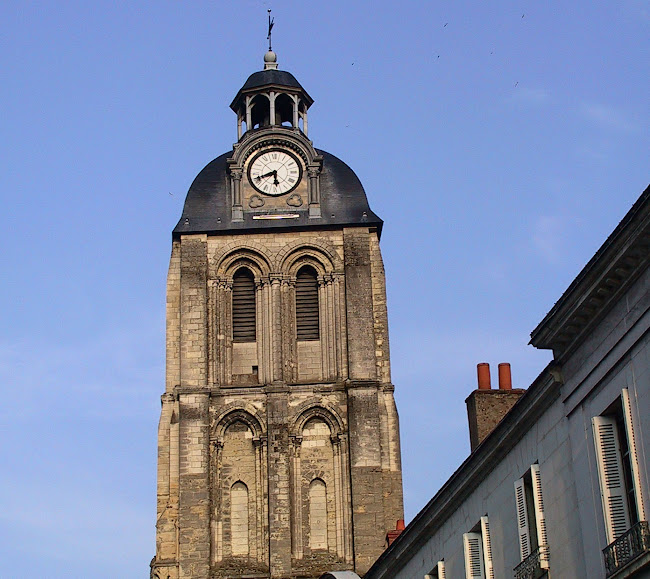 It might be nice to live in a city where we could walk to shops or use public transit. And live in an apartment with an elevator. As long as we have Tasha, our sheltie, we'll probably stay here. She'll be 5 years old in February, so we're thinking about a move in 10 or so years. We've thought about Blois, a big town just 25 miles north of us, and Bourges, a slightly larger town about 60 miles east of Saint-Aignan. Not to mention Auxerre in northern Burgundy, which is slightly smaller. Now I'm adding Tours to the mix. It has good public transit, including a fairly new tramway. It's only an hour from Paris by TGV. Who knows? Only time will tell.
Posted by Ken Broadhurst at 07:15