By car, the gîte we rented in Vézac was 15 minutes from Sarlat or the château de Montfort, five from La Roque Gageac, and less than 10 from Beynac or Castelnaud. We had rented it for 120 euros for three nights (two bedrooms, three people), Fri-Sat-Sun. That would have made it a four-day trip, because Sarlat is only about four hours south of Saint-Aignan, and we did a lot of sight-seeing along the way on the two "drive days." For example, we spent a couple of hours in le beau village called Collonges-la-Rouge on Tuesday, May 2. 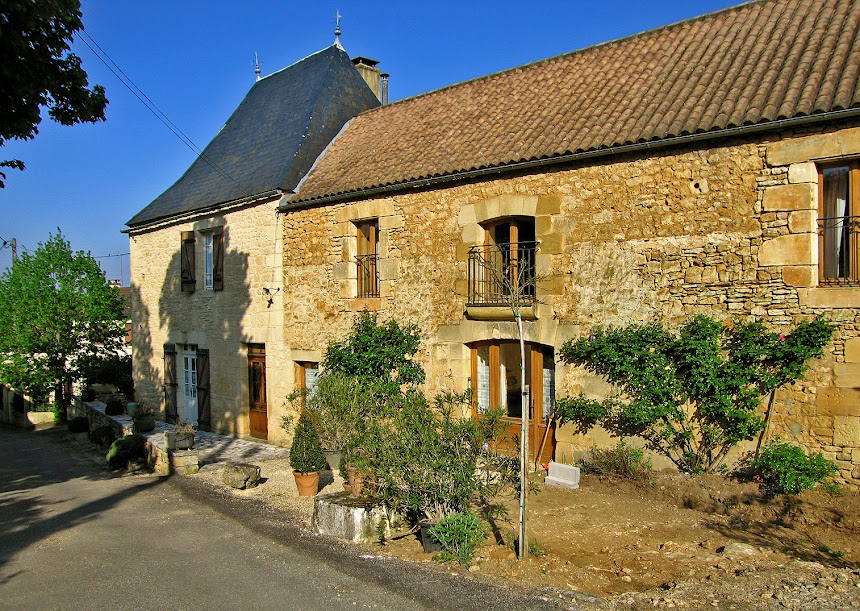 That Monday was May 1, a big holiday when a lot of people would be traveling by car, expecially back toward the Paris area. I asked the owner of the gîte if he had customers coming in on Monday, and he said no. So I wondered if he could let us rent the gîte for a fourth night. He said yes, for 40 euros. We thought that was a good deal, and we had plenty left to do on that extra day in the area. Above, you can see what the gîte looked like. The owner lived in the house with the slate roof, and we stayed in the stone building with the clay-tile roof. 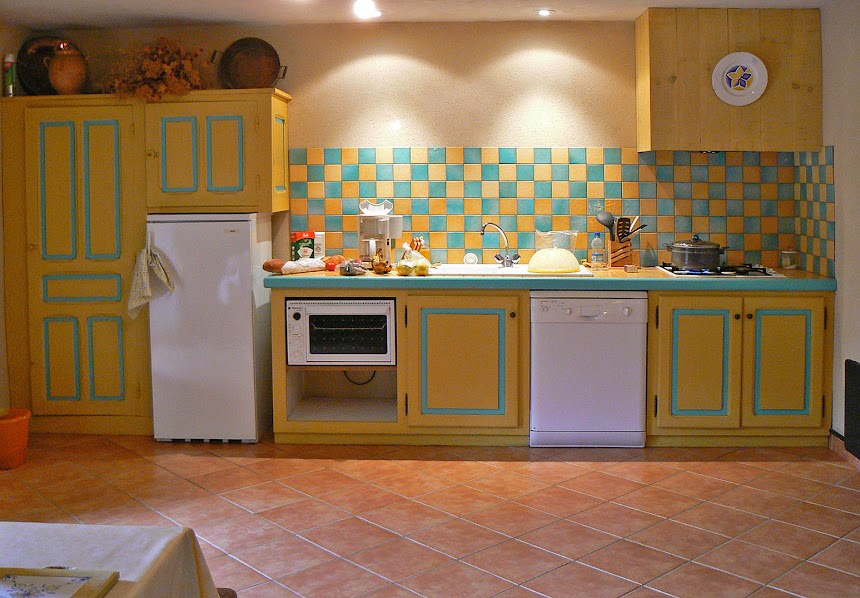 Above you can see what the kitchen was like. We didn't do any heavy-duty cooking, but we took pre-cooked foods with us in a cooler, and we could re-heat things as needed. There was a big supermarket just up the road toward Sarlat. We didn't spend a lot of money or time in restaurants. We had a lot to see and we didn't want to spend daylight hours indoors, or do a lot of night driving. 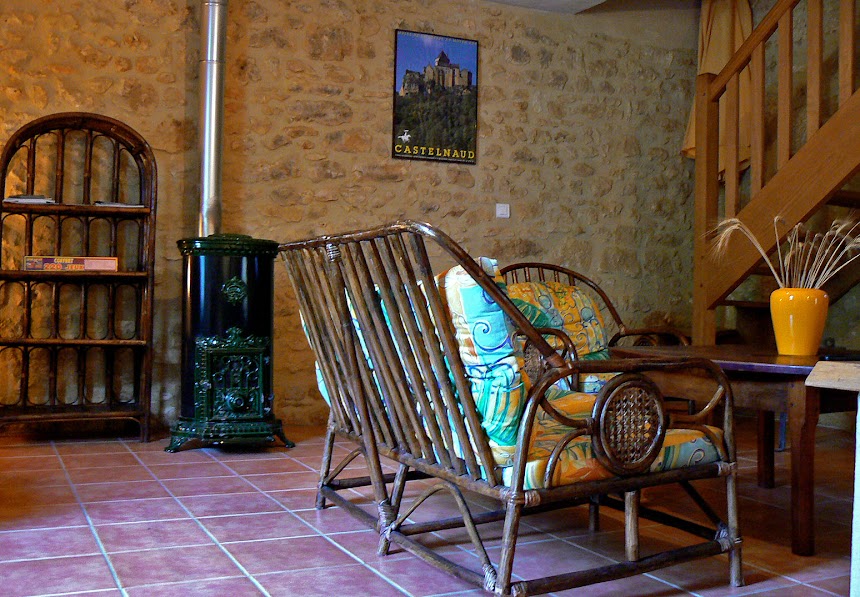 Luckily, Walt took some photos inside the gîte. I didn't, so only the first photo in this post is mine. Walt has let me borrow his pictures — he had a new digital camera at that point — his first. We used the wood-burning stove in the photo above to take the night-time chill off the place. The owner supplied us with some wood to burn in it, free of charge. 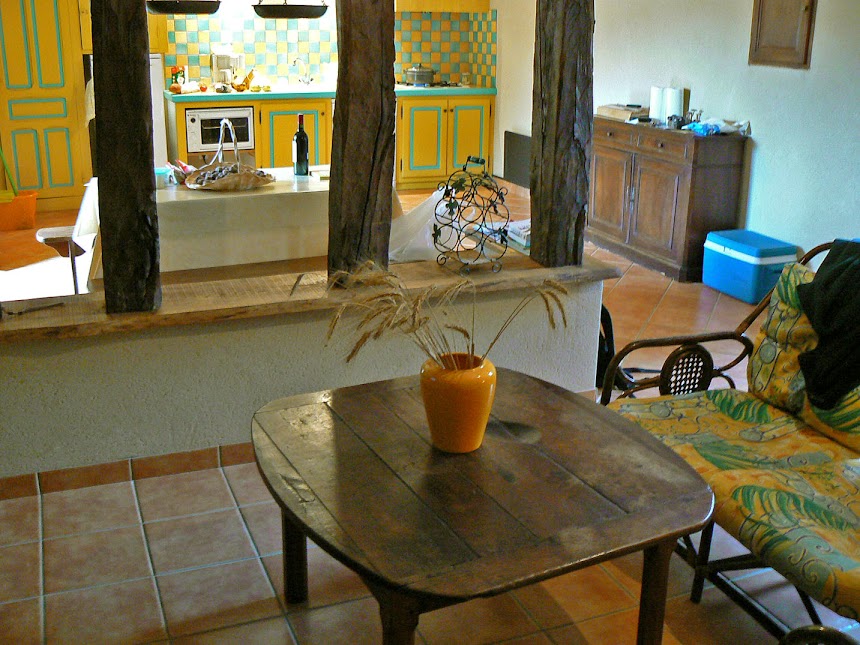 The gîte had obviously been renovated very recently. The place seemed new and was very clean. It was sparsely furnished, but the beds were comfortable, the water was hot, and everything worked. It was in a great location, as I've said. 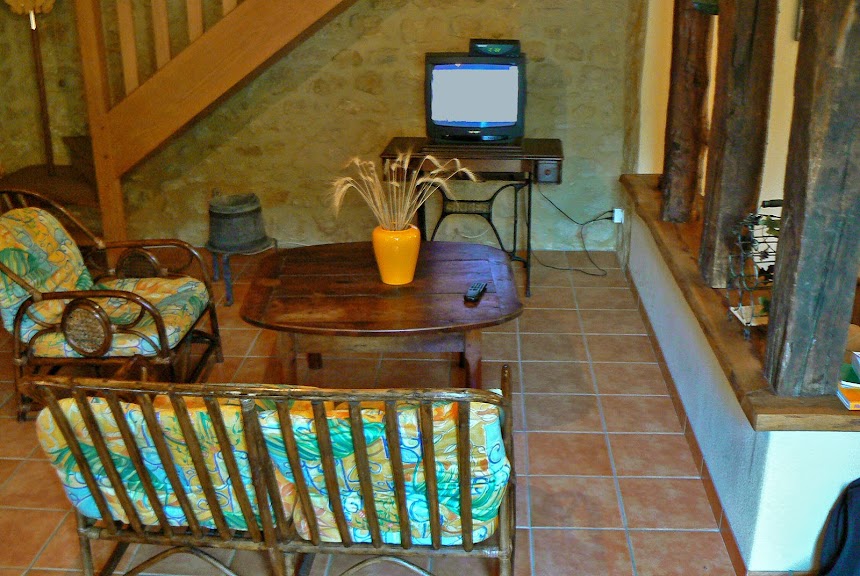 We had a television, so we could keep up with the news and keep up with daily weather reports. There were a lot of decorative touches around the gîte that were interesting, like this French version of a cookie jar. 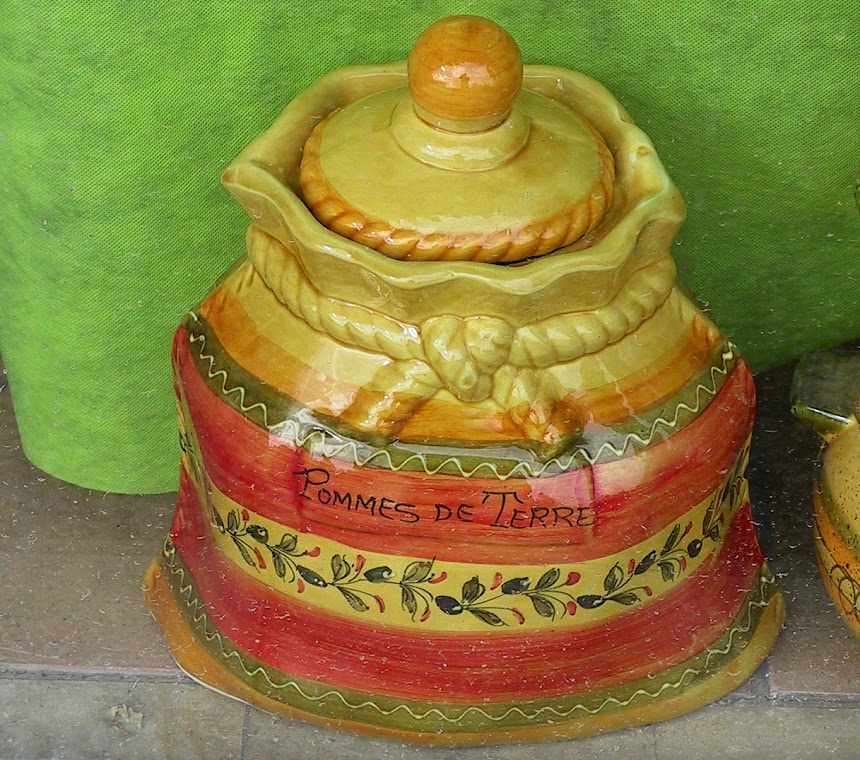 I can't believe that I've been doing these "pandemic posts" for nearly a year now. I guess this is all fairly backward-looking, though I hope that it is forward-looking as well. Maybe someday soon we'll be able to travel again and see other parts of France, or even some of these same places one more time. Meanwhile, we are enjoying our stay in what Walt always says is the nicest, most comfortable gîte we've ever stayed in: our own house in Saint-Aignan.
Posted by Ken Broadhurst at 06:00