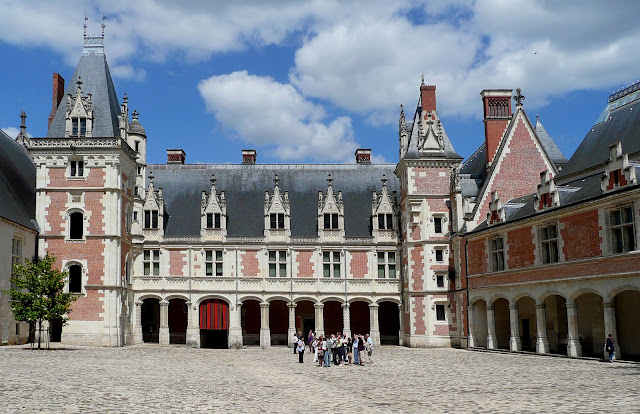 The Cadogan guidebook for the Loire Valley, a mine of information and entertainment, says thats the château at Blois is a group of "mismatched wings" and describes them as "clashing styles shoved next to each other." The author says, however, that the overall effect "is by no means unattractive; it's even rather amusing and certainly extravagant." Each wing is a grand example of its period's style, and the people who built them were some of the finest craftsmen of their time. 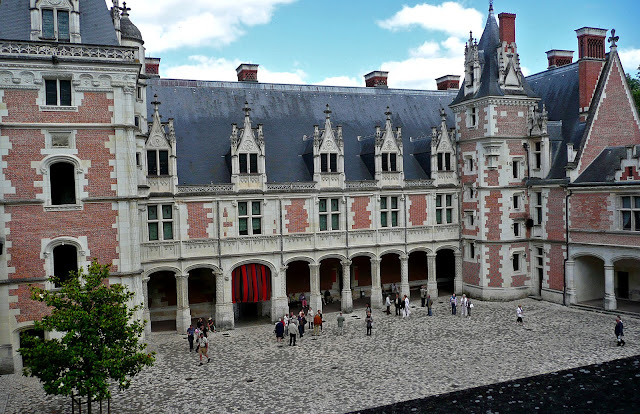 The Louis XII wing was the first to be built. Construction began in 1499, and the brick building is "essentially late Gothic in style" with just a few Italianate features. Louis XII was the king who brought the Italian Renaissance to France. He was born at Blois in 1462 and reigned from 1498 until his death in 1515. His predecessor and cousin, Charles VIII, had started a series of wars with the goal of conquering the Duchy of Milan, and Louis XII continued the campaigns. Thus did the French discover the treasures and charms of Italy. 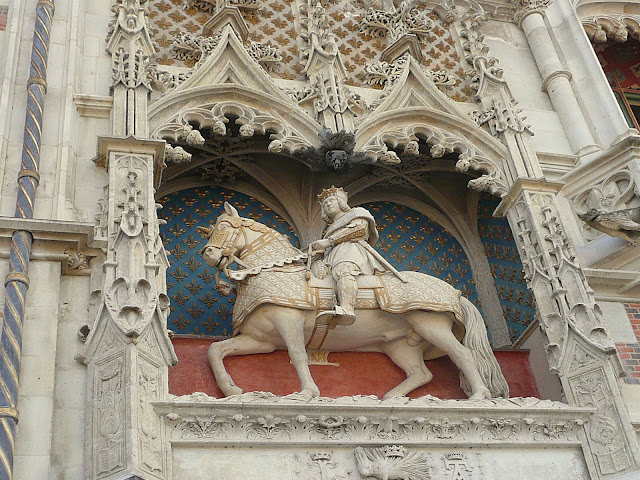 What is now called the French Renaissance was the result. The French adopted Italian styles and imported Italian architects, landscape architects, artists and other experts (including Leonardo da Vinci). The country emerged from the Middle Ages and a new era dawned. Depicted here on horseback in a 19th century statue on the outer façade of his château, Louis XII came to be known as Le Père du Peuple. For a few years, Louis controlled not only Milan but most of the Italian peninsula. It didn't last long. Louis was in his 50s, and age and failing health caught up with him. He died in 1515, leaving no male heirs. 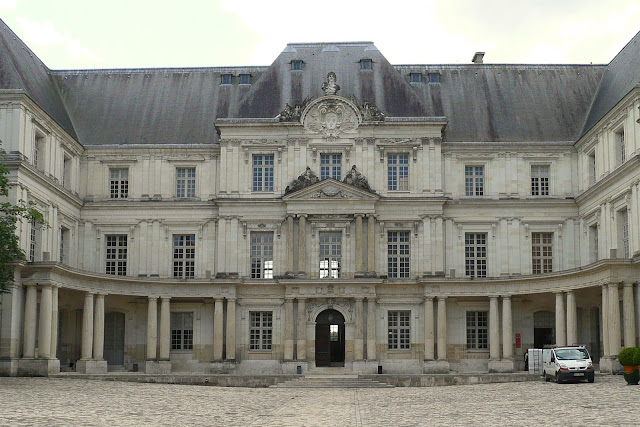 Louis had presided over the marriage of his daughter Claude to François d'Angoulême, who was the presumptive heir to the throne because Louis had no surviving male children. François would reign has François 1er from 1515 until 1547 — the glory days of the French Renaissance. He has a wing in the Blois château complex too, but that's another story.

Later, the wing you see on the left was built at Blois. Doesn't it look very different? Almost austere. Certainly not inviting. 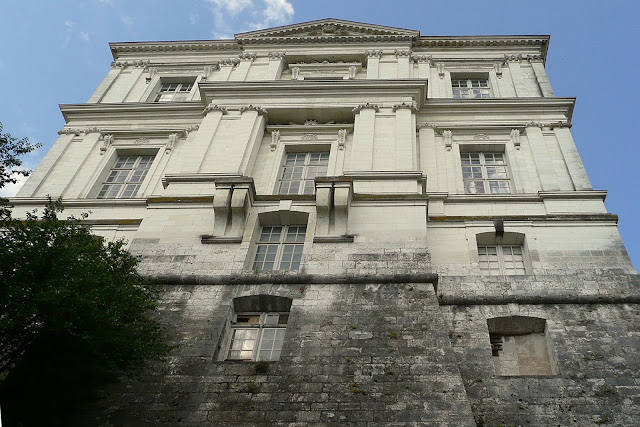 The Michelin Guide says politely that this part of the complex contraste avec le reste de l'édifice... and implies that it is difficult to judge équitablement. Above is a photo of its façade on the opposite side of the courtyard from the Louis XII wing. To the left is a view of the building from the street below, not far from the Église Saint-Nicolas. This wing was built in the classical style in the 17th century when Gaston d'Orléans, a duke but never a king, lived at Blois. His father was the famous king Henri IV (assassinated in 1610), who gave up Protestantism so that he could become king, and promised all French families a chicken in every pot for their Sunday dinner. Gaston, known also as Le Grand Monsieur, was the younger brother of king Louis XIII, who in turn fathered the Sun King Louis XIV. The seat of the French monarchy had moved away from Blois and the Loire Valley, back to Paris, Fontainebleau, and Versailles.