When I arrived in central Paris yesterday afternoon and emerged from the subway, rain was pelting down. I had taken a lightweight raincoat with me, folded up and stuffed into a pocket of my fleece jacket. That was a good thing I had done that, because I really needed it. Getting it out of my pocket and putting it on took a minute or two, and I got wet. But soon the rain started to slack off. 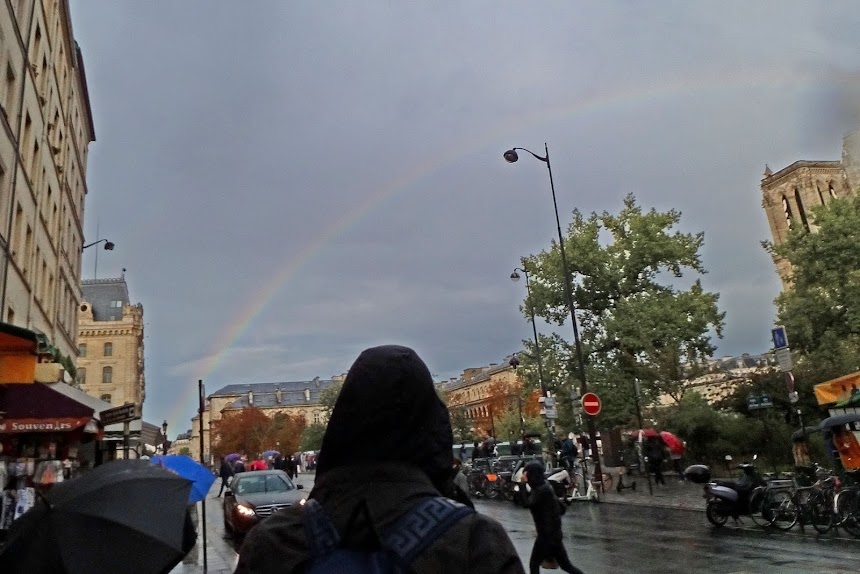 I had walked too far through underground tunnels and when I finally got to ground level I realized I was on the Boulevard Saint-Germain, a few hundred meters from the Seine, where Notre-Dame Cathedral stands on an island in the river. I know my way around in that neighborhood, so I walked east to the Rue Saint-Jacques and then north toward the river. The rain was ending and the sun was coming back out. Suddenly there was a big rainbow shining in an arc over the bell towers of the cathedral. It didn't last long, because a cloud covered up the sun again and the light faded. The photo above was the best one I could get before the rainbow disappeared completely. 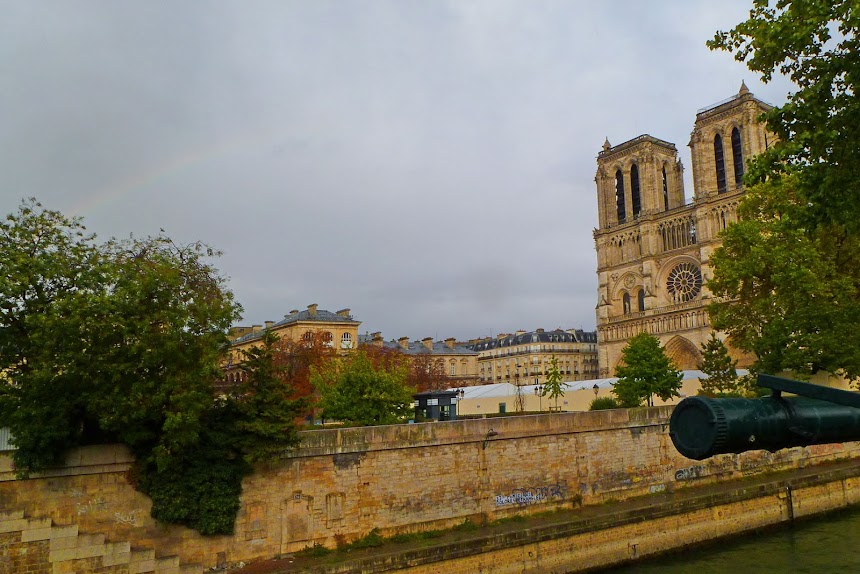 When you see just the bell towers of Notre-Dame, you might think all is well with the ancient monument. The towers weren't much damaged by the big fire a few months ago. I think supplice is the mot juste to describe what the cathedral is going through. I mean it in the sense of souffrance très vive, difficilement supportable — intense suffering, barely tolerable. 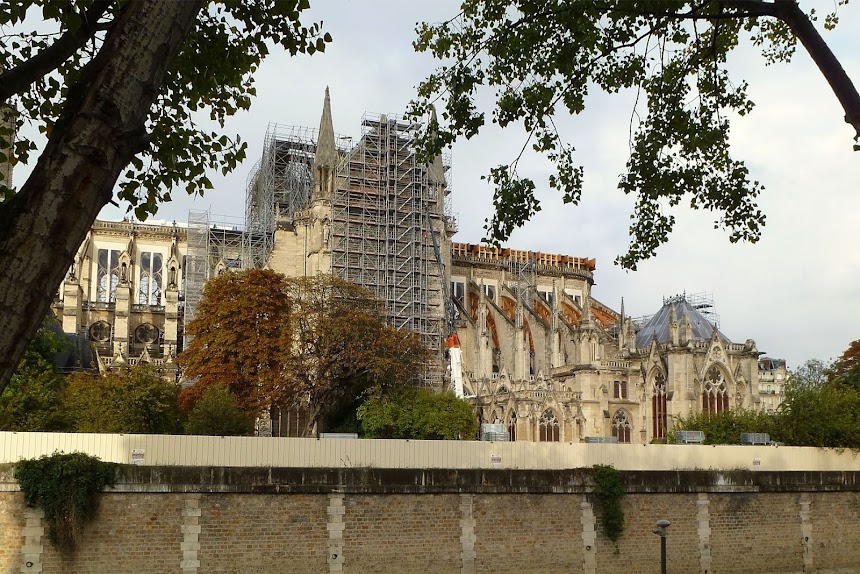 The roof of the church burned hot and fiercely the night of the fire. The metal roof was supported by a elaborate and very old wooden structure that was called la forêt ("the forest"). The wooden roof beams were fairly dry, as you'll understand, after standing up there for centuries protected by the room from the rains of the damp Paris climate. 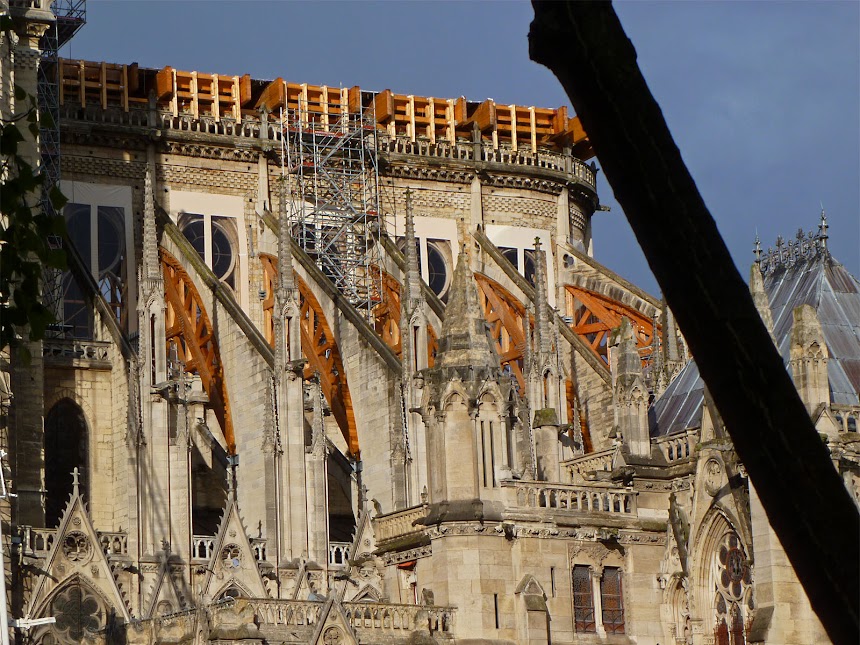 To keep the church walls from falling down, the old flying buttresses have been reinforced with wooden supports. The church is of course closed to the public, and even the grounds are fenced off. Authorities don't want tourists to get to close to fragilized stone walls that might come crashing down. 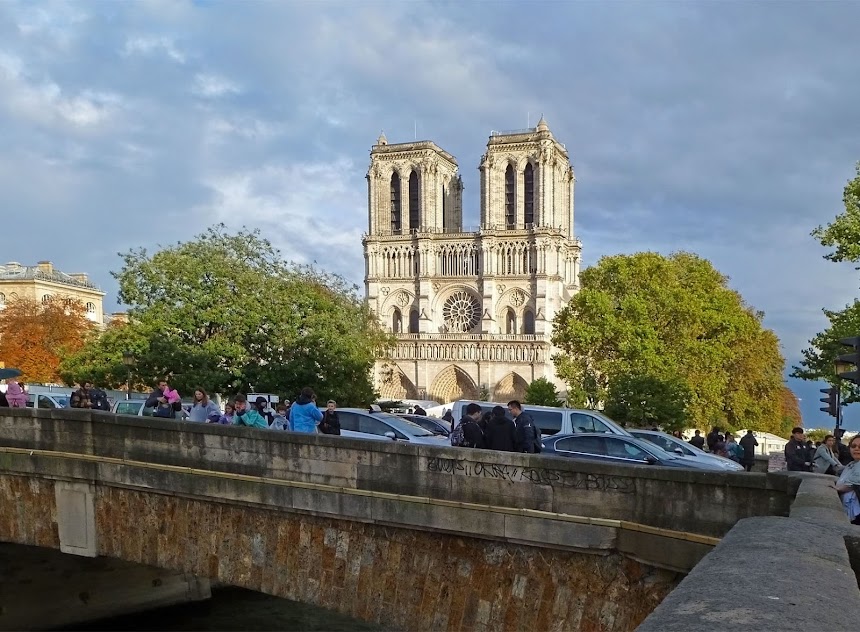 And many tourists there certainly were. I pushed my way through crowds and did the best I could to take a few pictures. The rain had ended, but I had only about 20 minutes to spend around Notre-Dame before hiking over to a neighborhood about 20 minutes away. My dinner companions, who had just arrived a few hours earlier from California, were waiting for me in the café where we had agreed to have our evening meal. I wasn't late; they were early. For me, it had been a day of delays and retards, as they say in French. And those delays weren't over yet...
Posted by Ken Broadhurst at 07:25