More garden foods, for us and the birds

Yard maintenance can be put on hold, especially when the weather is so dry and hot that not even weeds will grow. We are way behind in our outdoor work. What with the indoor work and chaos caused by getting a new bathroom put in, my medical appointments in Blois starting at the beginning of July, and the two — count'em, deux — heat waves (épisodes caniculaires) over the past 6 or 8 weeks... well, we're going to have to put in long hours to catch up with yard work before summer ends. Some days it feels like our whole summer has been out of control. 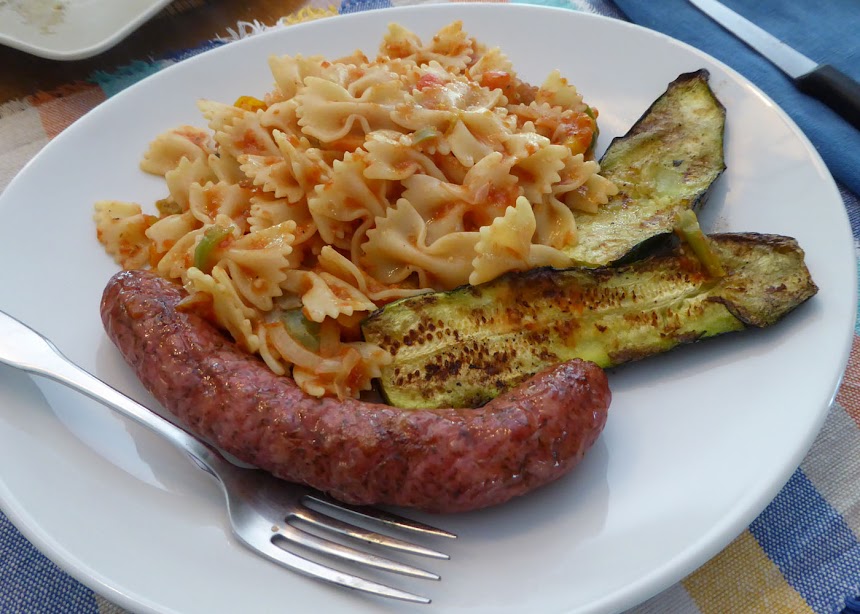 However, Walt has kept the vegetable garden going, faithfully watering it by hand, using a watering can, nearly every single day — I would say rain or shine, but we haven't had any significant rain in ages. Only the zucchini plants are producing anything right now, and above is a photo of another way to enjoy zucchini cooked on the barbecue grill. This was a dish called "sausages and peppers" using bow tie pasta with tomatoes, onions, and red, green, and yellow bell peppers, not to mention locally made herb sausages. Grilled zucchini went well with it. 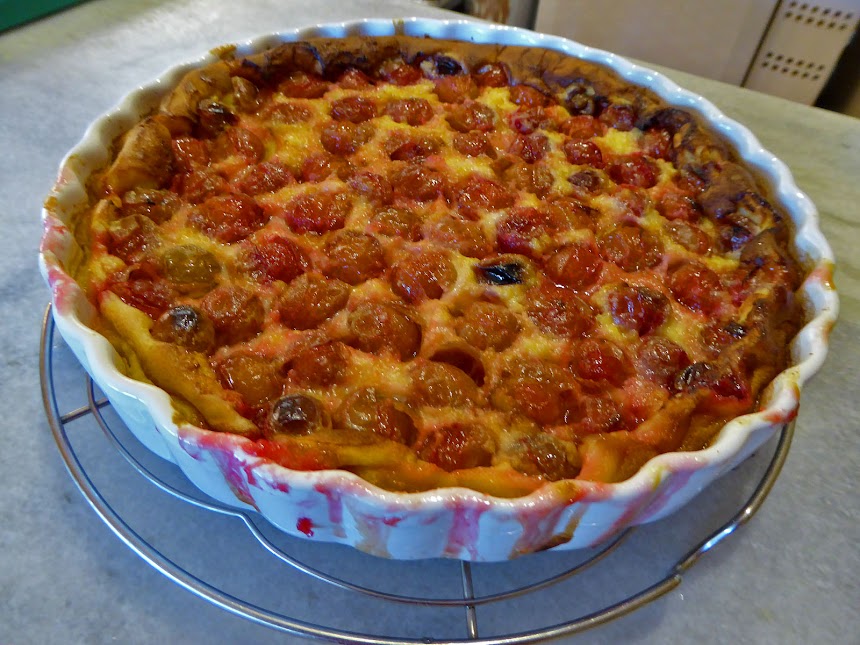 And then there are, or were, the plums. This is a clafoutis made not with cherries but with little red plums from a tree that I planted a decade ago. They are not the sweetest plums on Earth, so it's good to cook them. Actually, I picked these when the fruit was just starting to ripen, and it's good that I did. Apparently, hot weather caused the hundreds of plums that were still on the tree to ripen all at once and all of a sudden right after I picked the first batch.

A few days later I went out to pick some more, despite the heat, and I realized then that the plums had fully ripened and that the birds had been busy eating them. Finished eating them, I should say. Every juicy plum left on the tree had been half eaten. I imagine the poor birds enjoyed not only the sweetness but the moisture in the plums, since we've had so little rain this summer. Good for them — it was too hot for me to be diligent in picking them, or to want to do much baking.
Posted by Ken Broadhurst at 06:00