It's still hot this morning, but it's windy. That means the weather is changing. As CHM said in a comment, the high temperature in Paris yesterday was reportedly 42.6ºC. That's about 109ºF, an all-time record for Paris. Accuweather reports our high in Saint-Aignan was 42, or 108 in F. I don't think Accuweather deals with fractions of degrees. Anyway, I think this spell of high temperatures could be called a "heat storm."

Yesterday afternoon, our thermometer on the front terrace, in the shade on the east side of the house, read 40.5. That was hot enough for me. CNN reports that only 5% of the homes in Europe have air-conditioning, by the way. Ours doesn't, as I keep mentioning. 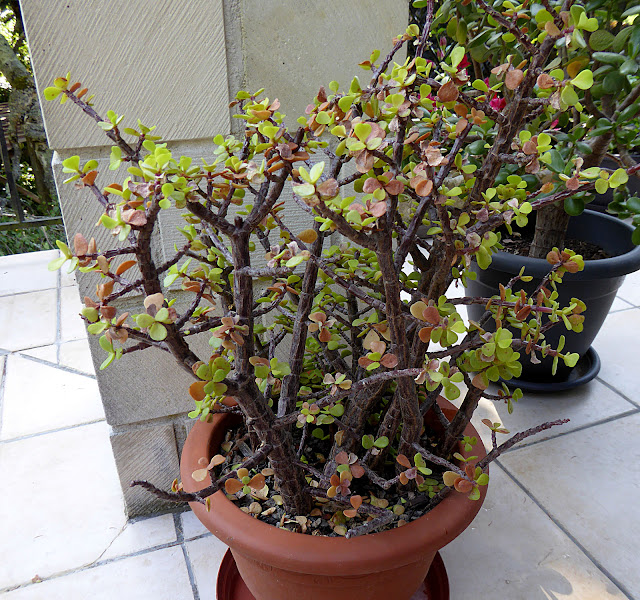 Look what the heat did to my "elephant bush" plant (Portulacaria afra). About half its leaves are burned to a crisp. This is a plant that I grew from cuttings brought to me by CHM in 2004. He had an elephant bush plant (also called a "miniature jade" or "dwarf jade" though not closely related to the jade plant) in California many years ago. 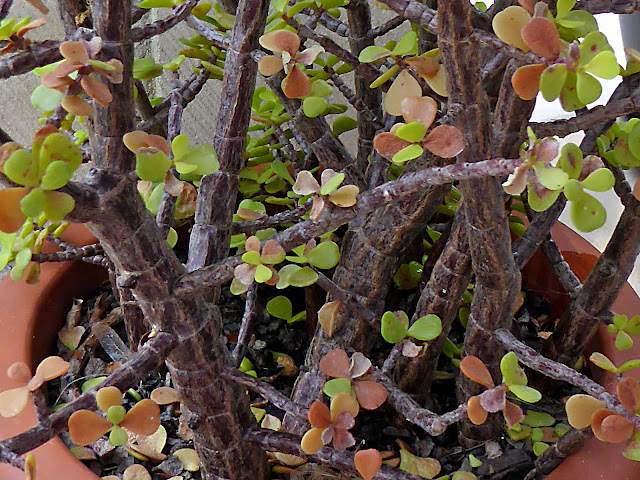 I'm sorry I didn't notice that the plant was suffering in time to move it out of the afternoon sun. I was watering it every morning. I thought the elephant bush was more heat resistant than it turned out to be. I don't think it's dead however, and I hope new leaves will sprout soon. 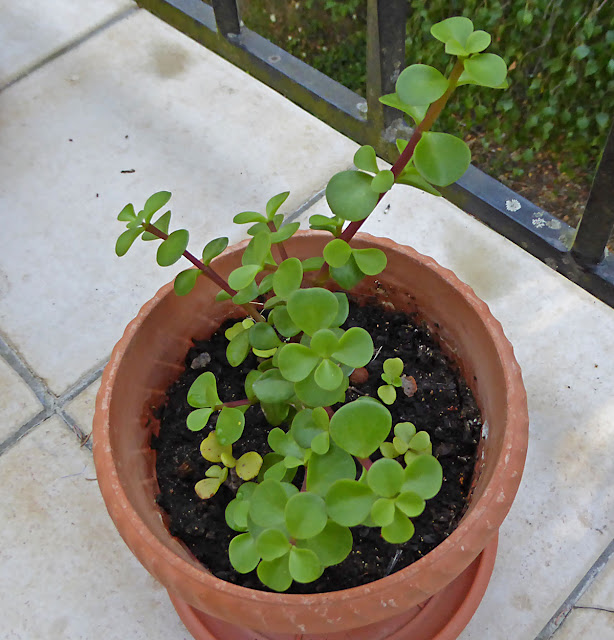 The "storm damage" happened not yesterday but the day before. I noticed it yesterday morning and brought the plant indoors. Luckily, I had also started a new Portulacaria plant from cuttings a couple of weeks ago, and it was not exposed to the killing afternoon sun. Last winter, I learned that the elephant bush doesn't like wet soil or temperatures below 10ºC. I had started a plant from cuttings but left it out in the rain, thinking it would be fine as long as the temperature stayed above freezing. Wrong! It died.
Posted by Ken Broadhurst at 06:30