A keeper, and a goner

I've learned a new term during all this bathroom work: une vasque. That means "a basin" — as a sink or tub. A bathroom sink in France is called un lavabo if it's large, or un lave-mains if it's small. A kitchen sink is called un évier. 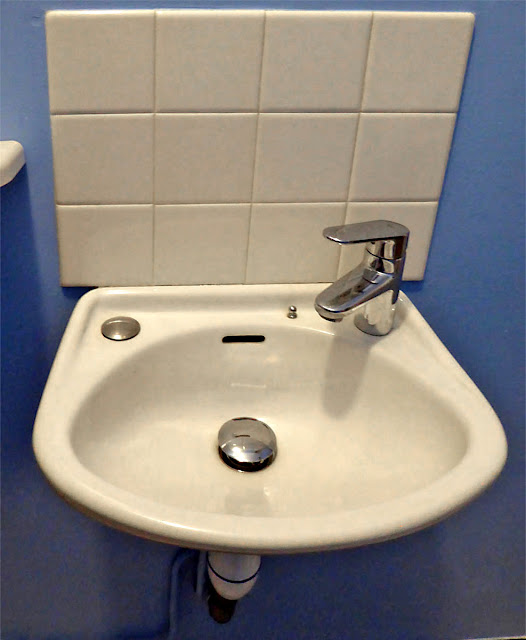 Here's the sink in our downstairs WC. After first thinking of replacing it, we finally decided it was a keeper. It's good to keep some original features in the house.

Once our decision was made, we talked to the plumber about putting in a new drain pipe, trap, and plug in the sink. He suggested what he calls un clic-clac. It's a kind of spring-loaded "push-button" plug. You push down on it and it closes; you press down on it again and it pops open. The only disadvantage with it, I think, is that is you have filled the sink with very hot water, putting your hand in there to pop the plug open might be uncomfortable. Previously, the drain in this lave-mains was just a wide open hole. There was a rubber plug hanging on a chain. The danger was that things could fall into the drain. And it was ugly. This looks better, even though the sink and backsplash need a good cleaning and a new bead of silicone. 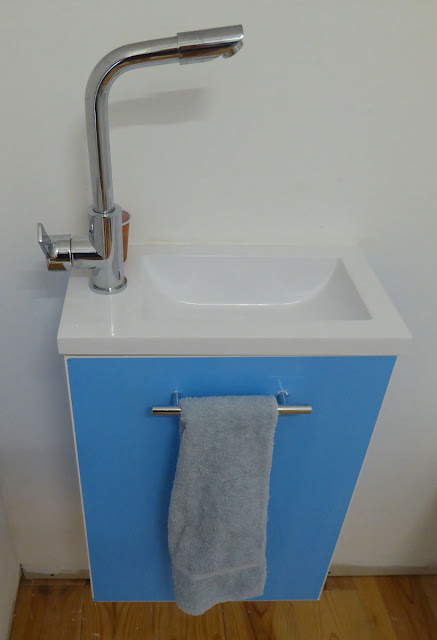 The "goner" is the new sink I ordered for the upstairs WC. It's just too small. Maybe it feels that way because I wanted such a big faucet on it. I'd like to be able to fill watering cans or other containers because I'd like to keep a few potted plants up in the loft. Hauling water upstairs all the time is a pain.

Problem is, every time I turn on the water in the new "little corner" and stick my hands under it to wash them, water splashes all over the room. We talked to the plumber, who says he can take it down and put up a bigger sink and cabinet. I can return the sink to Amazon for a refund. If the cabinet, after being glued and screwed to the wall, ends up not being returnable because it would be considered damaged, that's okay. We can use it elsewhere. Notice that we still haven't even peeled off the plastic film that was applied to protect the finish from dings and scratches. 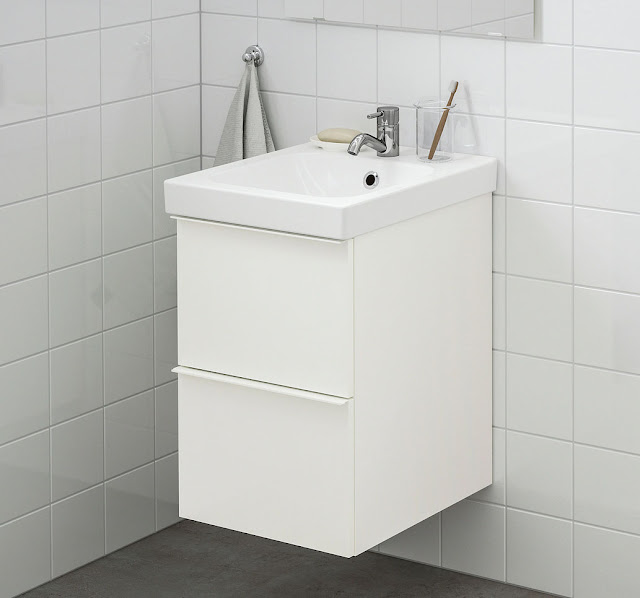 So here's the new wall-mounted cabinet and sink. It's the same width as the one above, but it's twice as "deep" — no, I don't mean the depth of the basin. I mean how far it sticks out from the wall. It's 43 x 49 centimeters; that's 17 inches by 19¼ inches. The smaller one pictured above is about the same width but only 22 centimeters (about 9 inches) in the other dimension. I don't know why I thought the new WC was going to be so tiny that it needed a tiny sink. Instead of the tiny lave-mains, now we'll have a full-size lavabo up there. I hope. 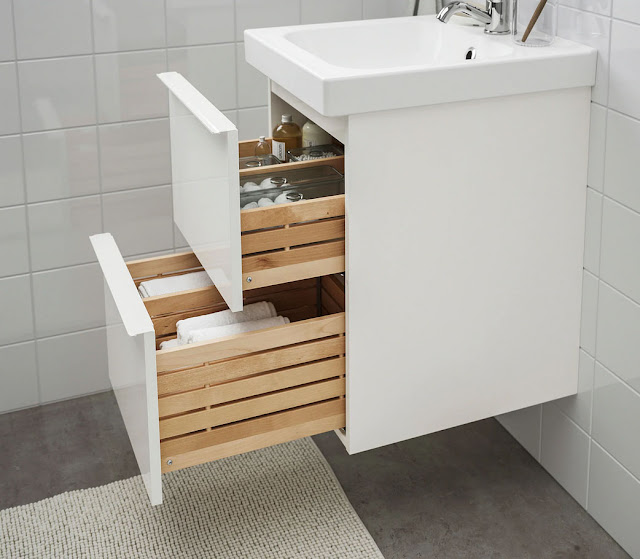 The other nice thing about the new cabinet is that it has two big drawers in it for storing whatever we want to store in the new WC. You can probably tell that this is an Ikea product. It has that look. We hope the plumber will come today and do the work of taking down the smaller cabinet and sink and install this model in its place. We're also waiting to have the new toilet installed in the downstairs WC. A friend of ours will be arriving on Friday to spend the weekend, and it sure would be nice to have all the plumbing functional by then.
Posted by Ken Broadhurst at 06:30