Sorry, all I can think about right now is Hurricane Florence. The storm center — its eye — has still not crossed the North Carolina coast. In other words, the hurricane has stalled. Predictions are for at least 20 if not 40 inches of rainfall over the next day and a half. That's 500 to 1000 millimeters.

So far this morning, CNN has reported that the highest winds recorded have been gusts at 108 mph (174 kph) in the little settlement of Davis (a.k.a. Davis Shores, pop. 400) in the eastern part of Carteret County, N.C. That area is known locally as "Down East" where I come from (Morehead City), which is more water and marsh than dry land. I have old friends who live near Davis. 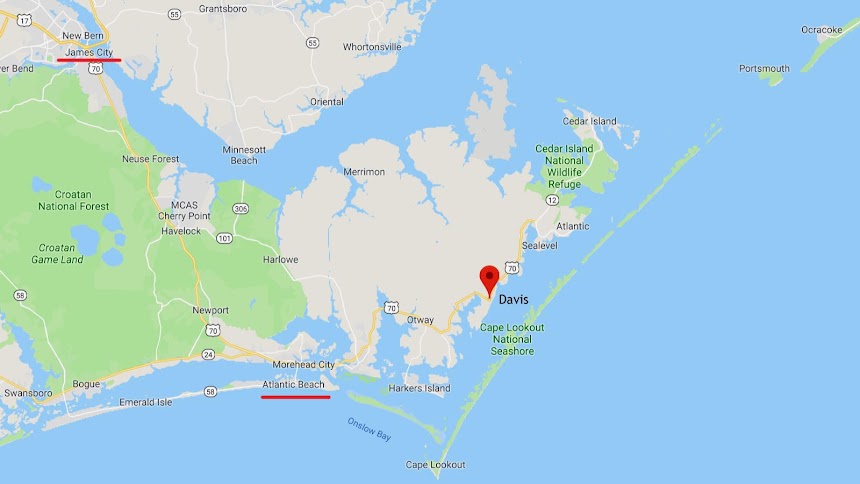 An hour ago CNN also reported that 12½ inches (320 ml) of rain have already fallen in the resort town called Atlantic Beach, where I spent a good part of my childhood. Our house was about two miles from there by road and bridge. Atlantic Beach (pop. 1,500) is on the barrier island that protects Morehead City (pop. 9,000) from ocean waves. It has been extensively developed over the past 100 years. That's when the first bridge from Morehead to the Beach was built. My grandmother used to share memories of going to the Beach by sailing skiff.

Also, CNN has reported that a 10-foot (three-meter) storm surge has started flooding the old town of New Bern (pop. 30,000), which was the capital of North Carolina in colonial times. To give you some scale, New Bern is 35 miles northeast of Morehead City. CNN just reported that officials are especially concerned about the situation in New Bern and Morehead, which are located on very low-lying land. All the electricity in New Bern is out. No report about Morehead.

On the upper right corner of this map, you can see the settlements named Cedar Island, Portsmouth, and Ocracoke. There's a car ferry that runs several times a day (probably not right now!) from Cedar Island, which is land's end in Carteret County, over to Ocracoke and back. The boat ride takes about 2½ hours each way. Ocracoke (pop. 950) is accessible only by ferry. The old settlement of Portsmouth is now a ghost town and is part of a national park called the Cape Lookout National Seashore.
Posted by Ken Broadhurst at 07:00