A couple of days ago, I mentioned a batch of "pulled pork" that I had made in the slow cooker. "Barbecue" is what we call this specialty in North Carolina, where it's pork barbecued and smoked over oak or hickory embers. It resembles Mexican carnitas, but it's spiced differently. It's normally made with pork, and I use mostly pork shoulder ("Boston butt") to make barbecue here in France, but it's just as good made with turkey legs and thighs. You can't really tell the difference. 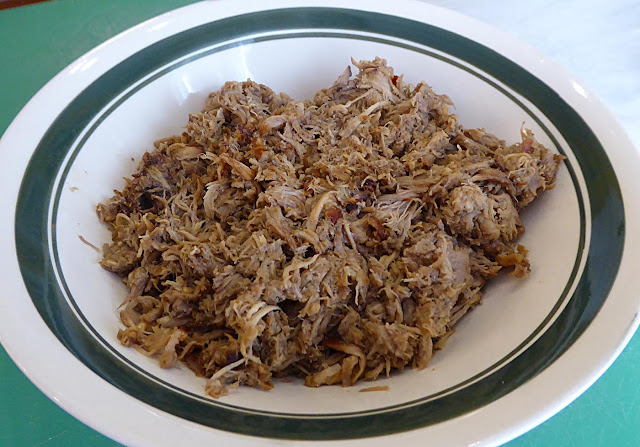 What you do to make it in the slow cooker is put two or three pounds of pork shoulder or turkey legs and thighs in the pot. Season the meat with about half a cup of vinegar (cider is good), plenty of black pepper, some hot red pepper like powdered cayenne or hot sauce like Tabasco or Texas Pete (a North Carolina product), a few pinches of dried thyme, a splash of Worcester sauce, and, really, whatever spices you like (cumin and smoked paprika come to mind). As for the seasoning, don't worry, because you can always add more seasonings after the meat is cooked and "pulled." (I always add some liquid smoke, which I bring back from North Carolina.) Here's a French recipe for pulled pork using a sauce made with sweet-hot barbecue sauce, soy sauce, ketchup, honey, and orange juice! 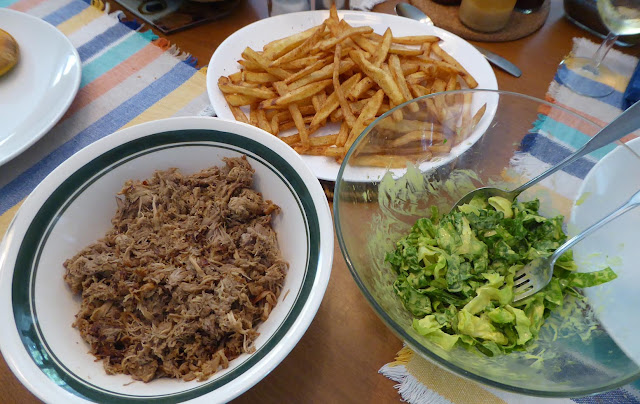 So pulled pork is a cooking method rather than a recipe. If you want to make it in a slow cooker (a crock pot), put pork or turkey in the pot and cook it at low temperature for about eight hours, or on high for five or six hours. When the meat is completely cooked — if it's turkey, it should be falling off the bone, and it's easy to remove and discard the skin and bones, etc. — take it out of the pot, let it cool down, and then, using a couple of forks or your fingers (impeccably clean, as Julia Child always used to say), pull the meat into shreds. If it's turkey or very lean pork, you might want to add a drizzle of vegetable oil. If the strands of meat are too long, don't be afraid to cut them into shorter pieces using a knife or kitchen scissors. Voilà : c'est du porc effiloché — shredded pork. 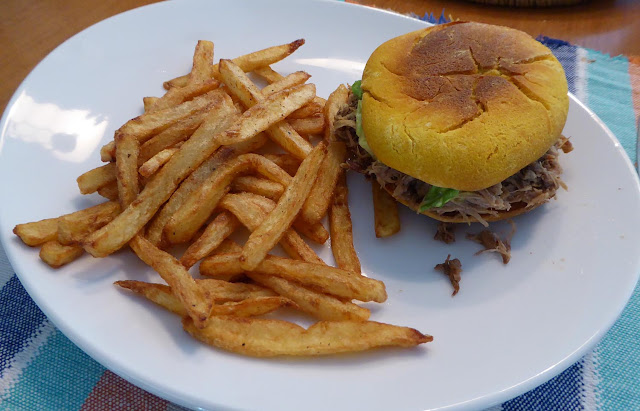 One way pulled pork is served is as a sandwich on a hamburger bun. We like to brown the pulled pork slightly in a frying pan before putting on buns. You can buy buns (whether in France or the U.S.) in the supermarket — I always liked American "kaiser rolls" — or you can make your own. There are many recipes for buns on the internet in English, and also in French. The recipe we used this time to make buns for our barbecue sandwiches called for a dough with a good amount of cooked and mashed or pureed sweet potato (the orange-fleshed ones) or pumpkin flesh incorporated. When I say pumpkin, I include winter squashes like butternut or French potimarron. Here's the recipe:
Hamburger Buns
made with pureed sweet potato or pumpkin
First make "sponge" by combining in a large bowl:
2½ tsp. dry active yeast (10 g)
½ cup warm water (120 ml)
½ cup flour (65 g)
Let the sponge develop for 20 minutes. When it's foamy and bubbly, add to it:
1 cup mashed sweet potato or pumpkin flesh (240 ml)
2 tsp. honey
1¼ tsp. fine salt
1 large egg
3 Tbsp. melted butter or vegetable oil
3½ to 4 cups flour (450 to 500 g) as needed to form a nice ball of dough
Mix all the ingredients together, but don't add all the flour at once. Whether you are kneading the dough by hand or using a stand mixer, add a good amount of flour to start and then gradually add the rest, as much as it takes, to make a ball of dough that is soft but not too sticky. Let the dough rise, covered, in an oiled bowl place in a warm place until it doubles in volume. It might take as much as two hours.
Then "deflate" the risen dough by kneading it again and cut it into eight (or six, or twelve) equal pieces (depending on how big you want the buns to be) and shape each piece into a ball. Place the balls of dough on a baking sheet and flatten them slightly. Let them rise again in a warm place so that they more or less double in size (another hour or so). They'll rise more when you put them to cook in a hot oven.
Bake the buns at 400ºF (200ºC) for 15 to 20 minutes, or until nicely browned. Make them ahead of time and store the ones you have left over in a plastic bag in the freezer for later.
In North Carolina, we usually put some mustardy coleslaw (cabbage salad) on the barbecue sandwiches with the meat, and we add some sauce. These buns are especially appropriate with pulled pork or turkey barbecue, because N.C. is a major producer and consumer of sweet potatoes as well as of hogs and turkeys.
Posted by Ken Broadhurst at 07:03