That's how commenter Emm on this blog describes the news and weather coverage by the media in North Carolina at this point. Hurricane Florence, which threatens to bring winds up to 150 mph (240 kph) or even higher, is supposed to pass across (or stall near) the Carolina coast 36 to 48 hours from now. You never know with these storms. They're erratic.

Some are leaving before the storm comes. Some are boarding up their houses and staying. My sister and our cousin told me yesterday that they are staying put, partly because they are key volunteers at the local food bank, which hands out groceries to people who qualify as needy. Those people will need assistance in the aftermath of the storm. The population of Carteret County is about 70,000. Little or none of the county's so-called land is more than 20 feet above sea level. 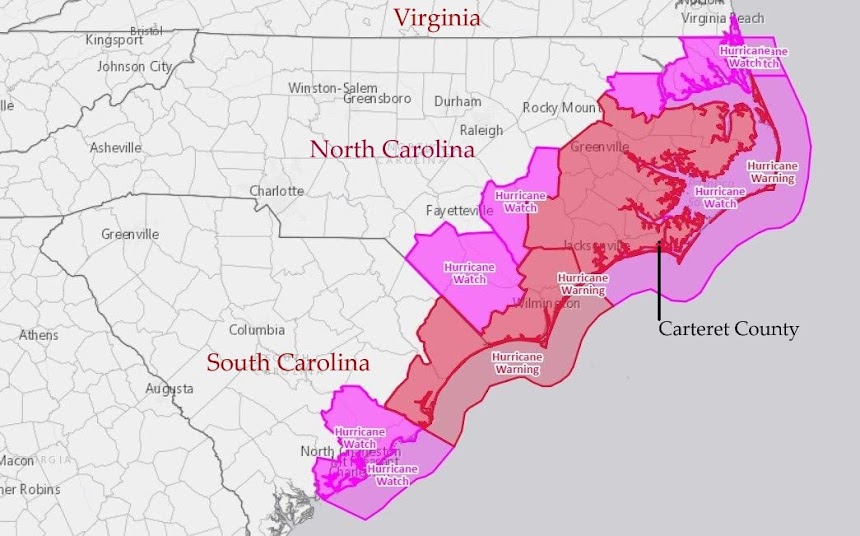 Forecasts are predicting Florence's "landfall" will happen somewhere along a 100-mile (160 km) section of coastline that includes the big towns of Wilmington and Jacksonville, as well as the smaller towns of Swansboro, Newport, Morehead City and Beaufort to the north. Nobody knows where the eye of the storm, with the strongest winds, will end coming ashore. All of the N.C. coast is made up of strips of sand and dunes called "barrier islands," which are not really dry land but exposed sandbars with salt marshes lying behind them, and then the mainland. People have built hundreds or thousands of houses on those sandbars.

"Biblical rains" are predicted across the state (pop. 10 million), so flooding rivers and streams are at least as big a danger as high, damaging winds, especially inland. And then there's the predicted "storm surge," as hurricane-force winds north of the storm's eye push ocean waters onto the low-lying coast. Okay, I'm hyperventilating despite myself.
Posted by Ken Broadhurst at 06:35