A geeky rant about computers and customer service

I've been having a lot of trouble with my laptop computer for two or three weeks now. It has been time-consuming and frustrating. It's actually not the computer itself — it works just fine. The trouble has to do with getting the battery re-charged. Except for that issue, I like the laptop a lot. I thought I might have to buy a new one from Amazon in the U.K., and that was going to cost me six or seven hundred euros. Or I could make the trip to the U.S. to buy a new one over there

For some reason, the cord that runs from the power block to the computer was loose in the socket in the side of the computer. That's been the case for months. Suddenly the laptop screen would go dark, and I'd realize that the battery was almost completely discharged. If I jiggled the cord in the socket, I could get it working again. But it wasn't making a good, steady contact, so it kept coming loose again. I dreaded seeing the screen go dark while I was working on the computer, writing a blog post or doing whatever.

This is a laptop that I bought in the U.S. about 18 months ago. I bought it there rather than here in France for two reasons: computers are considerably less expensive in the States than in France, and the U.S. laptop comes with an American keyboard layout. I'm not ready to learn a new keyboard layout. I learned the French one many years ago, back when we used not computers but little manual typewriters. I was living in Paris.

After three years typing on a French typewriter, when I went back to the U.S. in 1982 I had to re-learn the U.S keyboard. It took a while, and it was frustrating. In January 1983, I went to work with my friend CHM in Washington DC. We prepared the French translation of a magazine published by the U.S. government for readers in French-speaking Africa. We edited and prepared the articles on computer terminals that had the American keyboard. Typing was what I did for a living (along with writing and editing).

I won't go into all the differences between French and American keyboards, but they are just different enough that it's complicated to switch from one to the other if you are a touch typist (and even if you're not). Are you aware that every country has it's own keyboard layout? The American and British keyboards have just minor differences in key placement. The French Canadian and the French French keyboards are even more different from each other. (And so on. Compared to the American keyboard, the French keyboard has the A key where the Q key is, and vice-versa. Same with the W and the Z. The M and the comma are indifferent positions. You have to shift to type numbers or a period. And so on. Using a French keyboard can drive you batty for months, until you get used to it.) 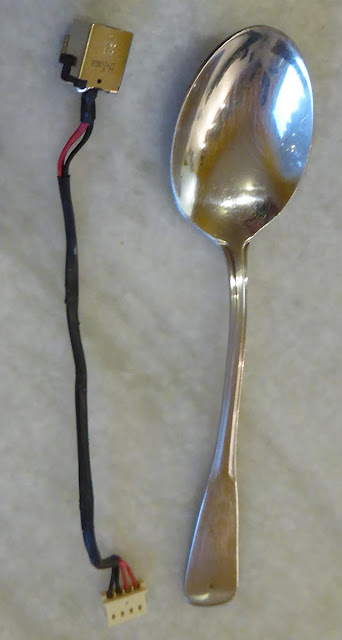 Anyway, because the laptop I use to "author" this blog is an American model, it has no warranty in France. And parts for it are not easy to find. I opened up the laptop a couple of weeks ago and examined the connector that runs between the external socket and the laptop's internal battery. It turned out to be a six-inch-long cable with the socket on one end of it and a plug on the other. (Photo on left with teaspoon for scale.)

I wrote down the part number of the little cable and started searching for a replacement cable on line. I couldn't find one in France. I found one on Amazon.com in the U.S. but when I tried to order it the site informed me that it couldn't be shipped to an address outside the U.S. I found one on E-bay but then found out that the seller was inactive because he or she was on vacation (it was an American). Finally, I found one available from a company in Bordeaux, and I ordered it. It came the next day. But it was the wrong cable, with a different part number.

Finally, I took the laptop to the local computer store, a small business called Aidicom. There, I attempted to explain the situation. The young clerk immediately started lecturing me about everything I was doing wrong. French people are like that when it comes to customer service. "The customer is always wrong" is their attitude. He told me the power supply I was using was not the right one. It was a 45-watt unit, and a laptop like mine needed a 65-watt charger. He was wrong about that, by the way. And then he said it was a really bad idea to leave the charger plugged in all the time. It needed to be unplugged every time the laptop was idle.

The man seemed determined not to listen to my explanation of the problem I was having until I rudely cut him off and almost shouted at him. It told him that none of what he said had anything to do with the problem. It was just a loose connection. He backed off and said he would try to find the defective part for me. Nearly a week later, he called me and said he couldn't find it. I went back over the computer store and told him I had found the cable on the website of a company in Bordeaux. I didn't tell him I had already ordered it but had received the wrong cable from that company.

Another week went by. I went back to the computer store. He said the part had been ordered. When I had ordered it, the package came in just 24 hours. I'm not sure why it took a week for the Bordeaux company to send the cable to Aidicom. Meanwhile I kept having to jiggle and tinker with the power cord on the laptop to keep it charging the battery. Sometimes I was convinced it was not ever going to work again, unless I got the replacement connector cable. But each time, after jiggling the cord for half an hour or so it would suddenly connect and I'd be back in business. I just tried to be careful not to touch the cord so that it would stay connected.

Finally, after two weeks of all this, the man at Aidicom called and said the part had arrived. I took the computer over there and left it for a few hours. A technician installed the new cable (I could have done it myself, but never mind...) and wonder of wonders, it worked. Of course, Aidicom charged me 55 euros for the repair, when the cable cost only 15 euros according to the Bordeaux company's web site. Anyway, until I saw it, I wasn't convinced it ever would. Two day later it's still working fine. I haven't yet put the 20 or 25 screws back into the laptop's back plate so that it's all back to normal. I'll try to do that this morning. Wish me luck.
Posted by Ken Broadhurst at 06:40