Morehead City, North Carolina, celebrated its centennial in 1957, when I was eight years old. I remember it. There was a big parade downtown, near the waterfront, with marching bands, beauty queens, and floats.

The town was founded, then, in the 1850s, because of its potential as a deep-water port. N.C. Governor John Motley Morehead and a group of investors bought the land on what was known as Shepard's Point and began construction of a rail line from Raleigh to the coast. The town was laid out in a grid pattern called the Philadelphia plan, with H-shaped alleys running through blocks of 16 lots between north-south and east-west running streets. 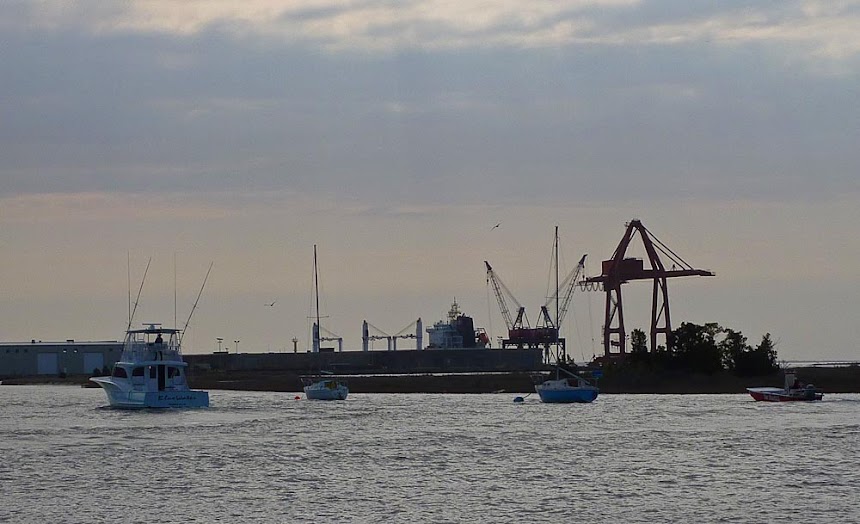 A view of the port from the Morehead waterfront
The town waterfront was where "party boats" docked. They weren't boats that people (necessarily) had parties on. They took parties of fishermen out to the edge of the Gulf Stream to fish for marlins, swordfish, groupers, tuna, and other big game fish. There were also seafood restaurants — most notably the Sanitary Fish Market and Captain Bill's — and gift shops — Dee Gee's was the best known — and fish markets — Ottis's and Davis's — up and down the five or six blocks of docks and fish houses. 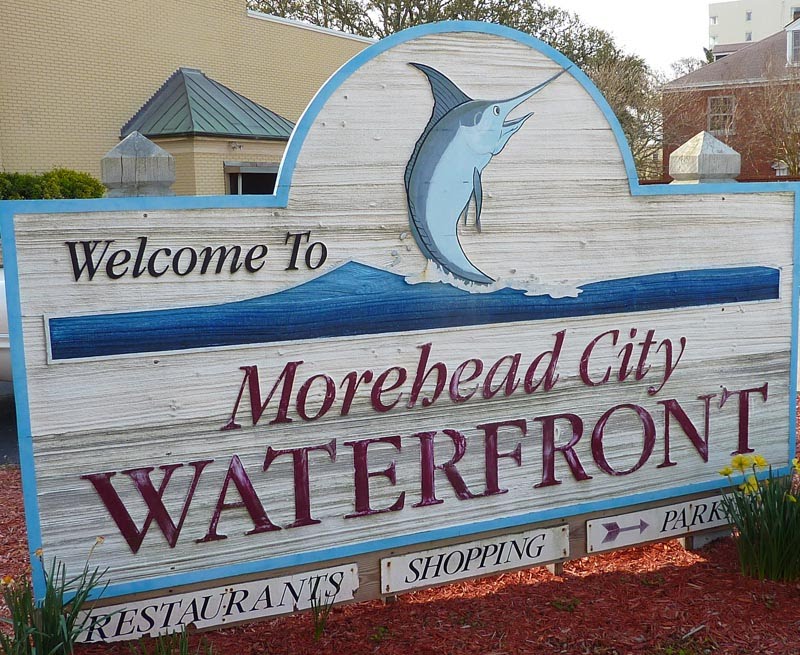 The alleys, unpaved, were like secondary streets. They were public rights of way, and residents could walk through them to find the most direct route to their destination. As children, we could always get to our friends, houses without having to go the long way around blocks on the sidewalks. It was like a town with many many shortcuts — it was and is pedestrian-friendly. A white ibis feeding in a marsh near downtown Morehead
Morehead has been the biggest town in the county since I was a little boy, but the much older town of Beaufort, just three or four miles east, is the county seat. Nowadays, Morehead is also the biggest town in the county for shopping, restaurants, and other tourist services. The population is less than 9,000 — it has doubled over the past two or three decades — but the summer population of the area is much higher. 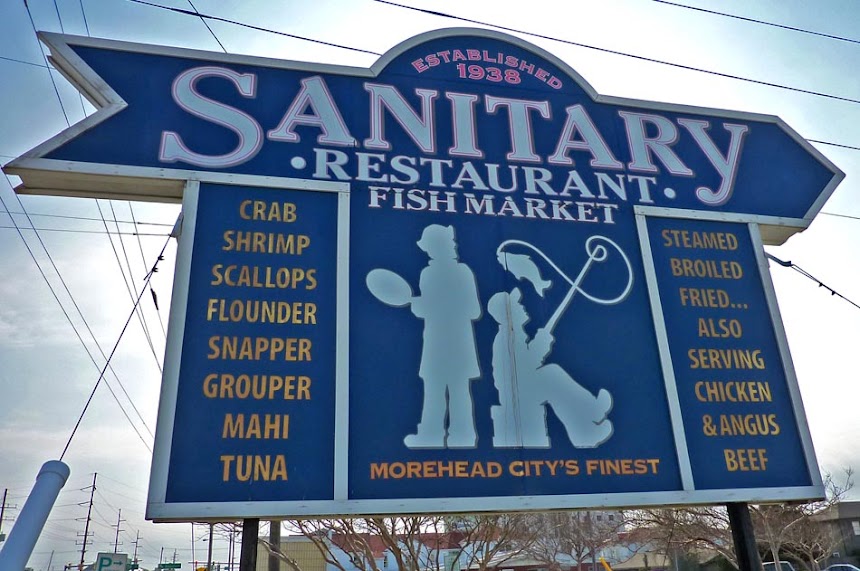 The town's most famous restaurant is the Sanitary Fish Market.
It's been in business since 1938 and can seat 600 for dinner.
My father and both my grandmothers were born here, of families that had been here for a couple of centuries. But both my grandfathers came from "off" — one from a town in North Carolina about 75 miles away, and the other from a town in South Carolina close to Charlotte, N.C. People are either local or from "off." I've even heard local people refer to people who live elsewhere as "foreigners." 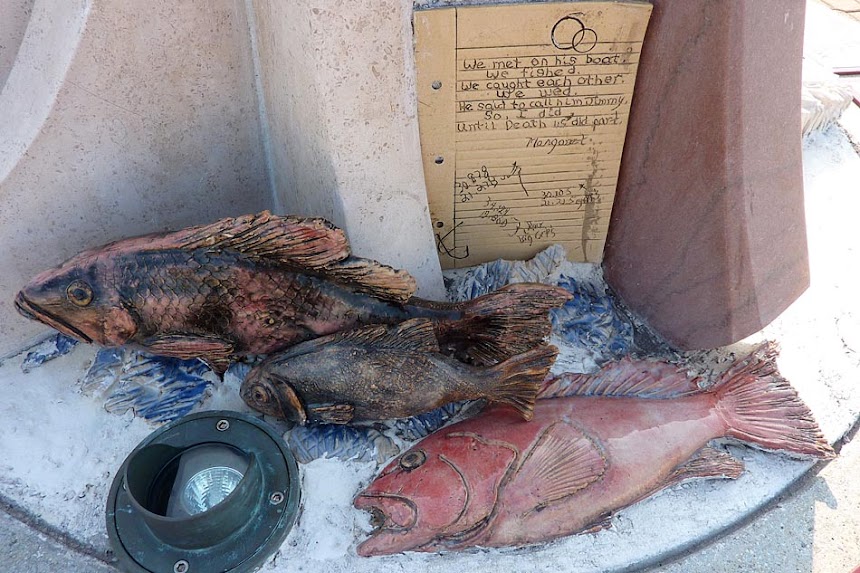 On the waterfront
Morehead City remained a relatively isolated place until the 1940s, when the federal government built two big military bases in the area. As a result, many people from off moved in, or stayed after having served in the military nearby. The local brogue started being diluted by accents and dialects from other regions. Better roads were built. The economy grew, and people started buying cars and traveling. 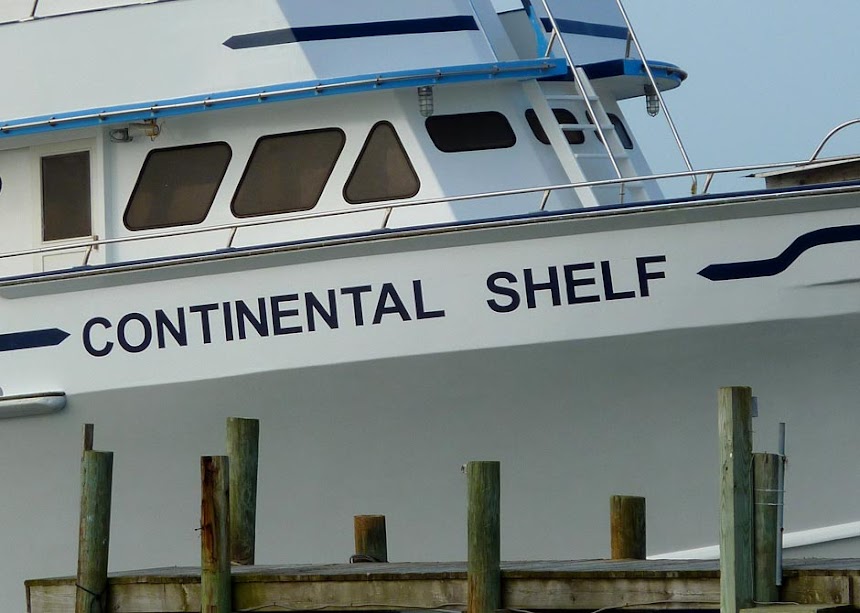 Big "head boats" take fishermen out to the Gulf Stream, at
the edge of the continental shelf, for deep-water sport fishing.
When I was growing up, we had two cars. My father was a civilian employee at one of the military bases, and my mother started working when I was about 10 years old. She had her own car. In 1960, when I was 11, we took our first long road trip. We drove to Charlotte and the towns just south of that large city, over the border in South Carolina. 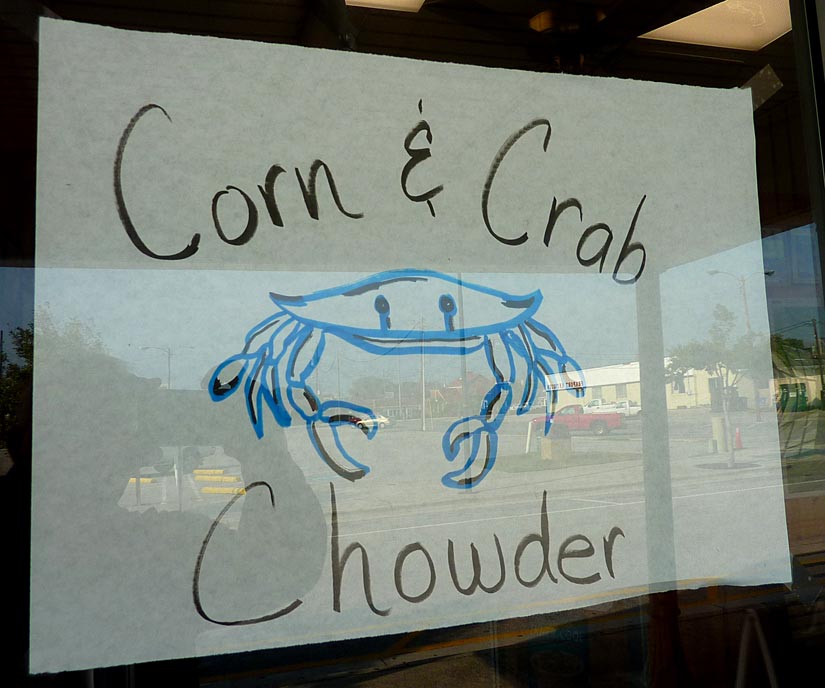 A sign on the door at the Sanitary
The drive took at least six hours back then. My mother's relatives — her father's sister and her first cousins — lived in a completely different world from ours, as I remember it. They had a farm. They milked their cows every morning and my mother's aunt churned her own butter. Being from South Carolina, they ate rice with every meal. They had a pump and a dipper in the kitchen for drinking water. And they spoke with the most outrageous Southern drawl you could imagine. We could hardly understand each other at times. 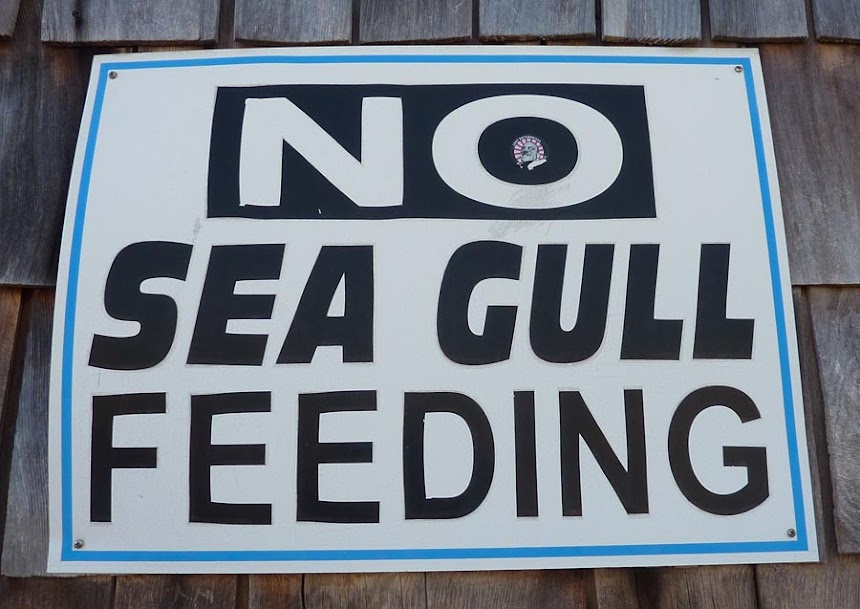 Tourists are discouraged from feeding the gulls
that swarm along the waterfront.
Out here on the coast, we were Southern but not too Southern. We were rural but not too rural. There were more fishermen than farmers. We lived in or near towns, because there wasn't a lot of land for farms and farming. We were coastal, and marshy. The Old South began just south of us, over the line in South Carolina. We spoke English with an Old English-sounding brogue, and we used a lot of old English terms and expressions that were considered old-fashioned or archaic in other parts of the U.S. 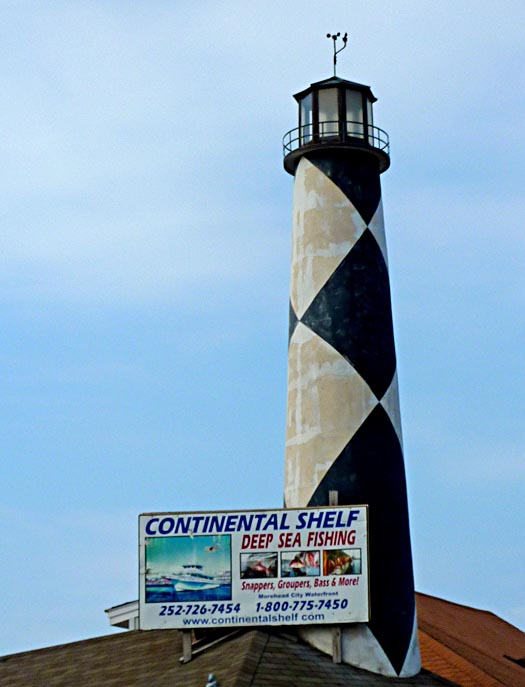 Go fishing off Cape Lookout...
If you ever come to Carteret County NC, drive Down East to Harkers Island, about 25 miles (40 km) from Morehead City by road and bridge. Go down to the eastern end of the island and go into the Core Sound Waterfowl Museum. If you're lucky, you'll get to talk to Jan Gillikin, who is a native Harkers Islander. She has the best local accent I've heard in a long time. She's enthusiastic and talkative, and very knowledgable when it comes to the local people, traditions, and history.

That's what we did yesterday. We spent half an hour talking and reminiscing with Jan. The displays in the museum are very well presented and informative too. 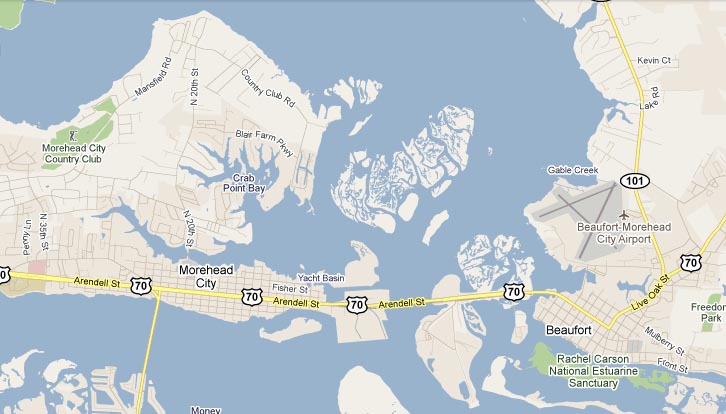 I've been here for two weeks now, and today I'm flying back to France. The weather has been gorgeous the whole time I've been here on the Carolina coast. The food is definitely good. The one thing I can't face is the heat and humidity of a Morehead summer. Everybody has air-conditioning now. We didn't when I was growing up. I don't know how we survived. That's why I like to visit in March — for the mild weather.
Posted by Ken Broadhurst at 09:06