A walk in New Bern

On Friday afternoon my sister and I took a drive up to New Bern. It's about 35 miles from the town where we both grew up. New Bern is the second oldest town in North Carolina — it was setteled in 1710. The population now is about 30,000. The town is located at the confluence of two rivers, the Neuse (pronounced as "noose") and the Trent.

I wanted to go to New Bern to walk around and take pictures in the old historic district. On this trip to North Carolina, I haven't gone on any road trips like the ones I've taken with my mother over the past few years. New Bern, a town where we have always gone to do shopping, because it's a lot bigger and has more stores than Morehead City, remained a place I didn't really know very well. 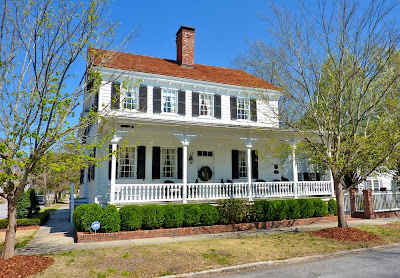 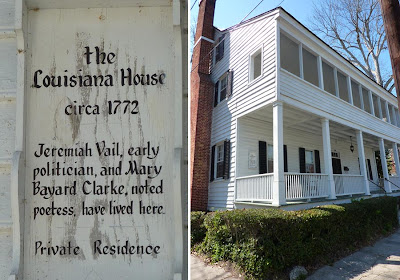 North Carolina was settled later than its neighbors to the south (South Carolina) and the north (Virginia). The first English colony in Virginia was established at Jamestown in 1607. In South Carolina, Charleston was founded in the mid-1600s. By 1790, however, North Carolina had a population of about 900,000, compared to 1.1 million in Virginia. Today, N.C. is home to nearly 10 million people.

I liked this courtyard paved with bricks.
Before even the settlements in the neighboring states, Sir Walter Raleigh had attempted to settle colonists on the N.C. coast in 1584 or '85. Those colonies failed and all the settlers disappeared into the wilderness. Even so, the first English child born on American soil was born on North Carolina's Roanoke Island in 1587. 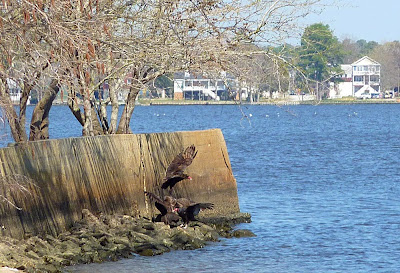 We noticed these turkey vultures on the town's riverfront walk.
Turkey vultures have a wing span of nearly two meters (six feet).
However, it was in 1710 when a group of Swiss and German settlers, led by a Swissman named Christoph von Graffenried along with the English explorer and naturalist John Lawson, established themselves on the site of present-day New Bern, North Carolina — hence the name of the new town. Lawson was captured and killed by the local Tuscarora tribe of Amerindians in 1711. 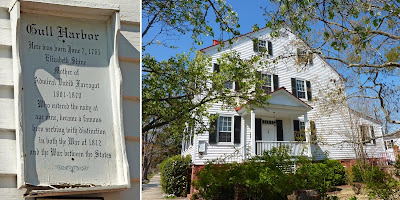 By 1770, the British had made New Bern into their capital city in North Carolina. They built a governor's mansion — Tryon Palace — but it burned in 1790, at the end of the War of Independence. In the 1950s, a replica of the old mansion was built on the original foundations and it has become New Bern's most popular tourist attraction. 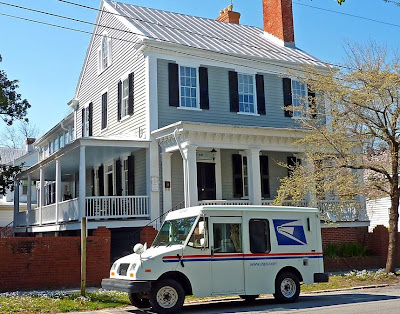 A U.S. Postal Service vehicle in front of one of the old houses
There was a battle of New Bern during the U.S. civil war in the 1860s. New Bern was taken by Union (northern) forces — as opposed to Confederate (southern) forces — in March of 1862 and remained under Union control for the duration of the war.

There are a lot of big old houses in New Bern, dating back as far as the mid-1700s. They are part of a national registry historic district, the equivalent of France's Monuments Historiques. I'm posting photos of some examples here, in case you don't know what American houses from the 18th and 19th centuries look like.