Yesterday was the anniversary of the bad wind storm that we had here in the Loire Valley and out on the Atlantic coast of France last year. It's almost embarrassing to say that the two plum trees that blew over in our back yard are still lying there on the ground. Work for the spring...

What was all that talk about the euro losing some of its inflated value against the U.S. dollar this year? I just looked and the euro is worth just over $1.38 U.S. When I changed money a couple of months ago, the euro was worth $1.29. Big sigh.

Annie Girardot died yesterday at the age of 79. She was one of the most popular and productive French actresses of the past 50 years. I liked her in Tendre Poulet (1978) with Philippe Noiret, a comedy. It was filmed in great part in the Latin Quarter in Paris, where I worked back then. 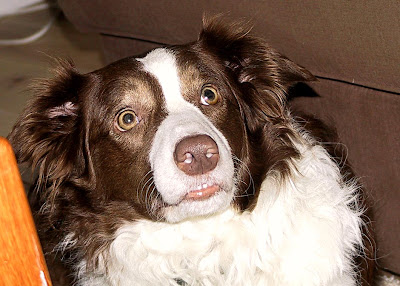 Callie trying to understand about donkeys
The donkey came out to see me and Callie a couple of afternoons ago. He hasn't been out in his meadow on the edge of the vineyard in quite a while. I think he's getting a little long in the tooth. Unfortunately I didn't have my camera with me. Callie kept her distance. She probably doesn't know that donkeys hate dogs and will try to trample them to death if they get a chance.

Bertie comes in from the cold: he's been spending more and more time in the house with us. I think there's an even more aggressive cat than Bertie in the hamlet these days, and Bertie is avoiding that adversary. He came back all scratched up one day last week, after what must have been a big cat fight. Callie still won't leave Bertie alone when she sees him, but the other evening Bertie was upstairs and I told Callie just to go downstairs. She did it.

Jacques' wife has suffered a stroke. I found out last night. Jacques is the contractor who did our attic conversion for us in 2010. E. is probably younger than I am. She doesn't smoke, doesn't drink, isn't overweight. It's not fair. I hope she recovers fully and speedily. A stroke in French is called un accident vasculaire cérébral (AVC). 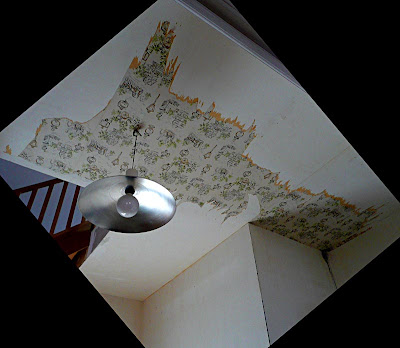 Just this little bit left. How many more days will it take me?
Don't mention wallpaper to me ever again. I may go off on you. I'm still working on the ceiling over the landing. There's only a little left to do, and I will finish it this week. But it's a b**** to work on. After a few minutes my shoulder hurts so bad that I just quit.

How hard it must be to try to make some classic French dish like coq au vin, bœuf bourguignon, or blanquette de veau if you've never tasted that dish in France! Even vinaigrette — there's only one way to find out how it ought to taste. Come try it in a restaurant or chez quelqu'un in France. Same with the cheeses — they are different here, because they are fresher. And wine. Bread, for that matter.
Posted by Ken Broadhurst at 08:32