Singing in the rain

It rained yesterday and I had an allergy attack. The wind blew from the south and brought up some kind of pollen that attacked my eyes and nose. It was like having somebody stick needles into the lining of my nasal passages after having sprinkled fine sand into my eyes.

But I'm used to it. It's a pattern, and there's some cold comfort in knowing that. Today I will be better, after I walk the dog and take a shower. I hope. According to the weather report I just saw on Télématin, the news is that there are three wet weather systems affecting French territory today. They say it's unusual to have three systems over the country at the same time. 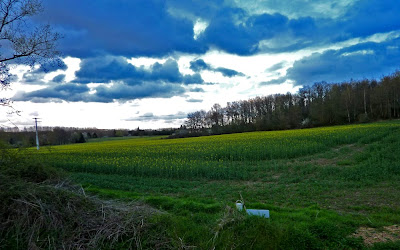 Walking down toward the river with the dog
yesterday afternoon
Late yesterday afternoon, following an impromptu visit from Nick of Nick and Jean at A Very Grand Pressigny — he was doing a test run on his motorcycle in preparation for the long ride back to England today — I took the dog out for her afternoon stroll. The rain had stopped but there were still big puffy clouds in the sky. We walked north through the woods, a ways east past woods and fields, and then south along the Rue des Laurendières down in the river valley. 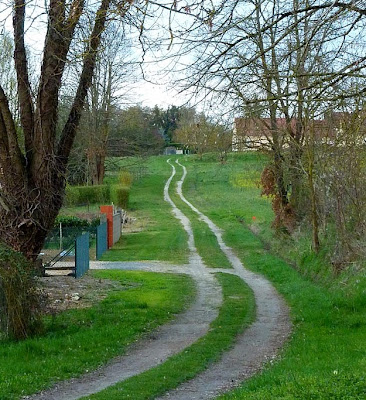 La rue des Laurendières, parallel to the Cher River
down in the valley, is a dirt track.
A big anvil-shaped cloud formed over a field of colza (a variety of oilseed rape) that is just bursting into flower down below. Suddenly it started raining, and Callie and I were about as far from the house as that particular route takes us. Of course. Luckily, I had thrown on my rain gear for the walk and Callie doesn't mind getting wet. 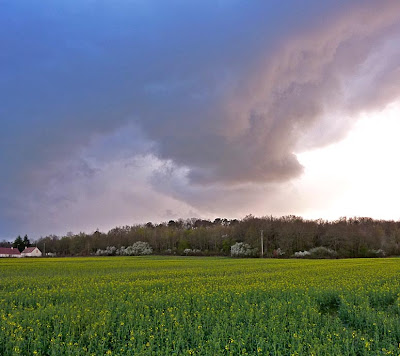 Our house is up the hill on the other side of the woods
in this photo.
The rain lasted just long enough for me to get good and soaked as I climbed the hill and arrived back at the house. It wasn't unpleasant though. I just hope it doesn't happen again this morning. It's about time for the first walk of the day.
Posted by ckb at 07:11