We went to New Bern to go shopping. Up there, 35 miles from home, they had J.C. Penney's, Woolworth's, Sears & Roebuck, and other big stores that we didn't have in Morehead. There were no malls or even strip malls in those days. People shopped downtown. They dressed up to go shopping. 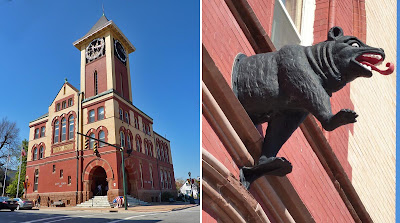 New Bern city hall, decorated with
the town's mascot, the black bear
That's what I remember. We had a friend — the daughter of a neighbor, a quasi-cousin — who married a man from New Bern and went to live up there. When she and her children would come home to visit her parents, it was almost as if we were being visited by people from the city. In a remote place like the one we lived in, New Bern was the outside world. 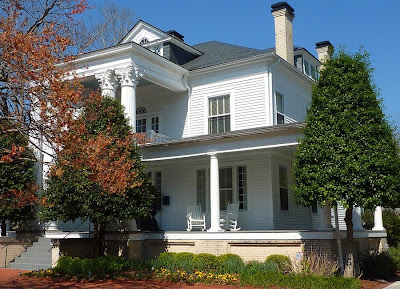 This New Bern house has a shady, spacious front porch
and grand columns at the main entrance.
Don't get me wrong. I grew up in a very special place. It was far from the cities, the weather was mild and sunny, and the beaches were long and uncrowded. Seafood was plentiful. Everybody seemed to know everybody, and children played outside, unsupervised — their parents didn't have to worry about them. It was a world of corner grocery stores and long hot summers. 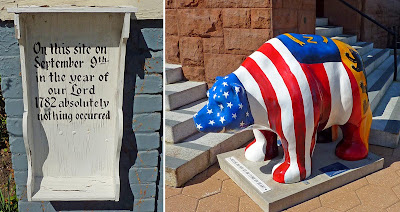 People in New Bern obviously have a sense of humor...
By the time I was in college (1967-71) New Bern was just an obstacle. You had to drive through the center of it on the highway that led from the coast to the Raleigh-Durham area. Most of the road was just two lanes then, one in each direction. If you got stuck behind a big truck, it was very slow going. 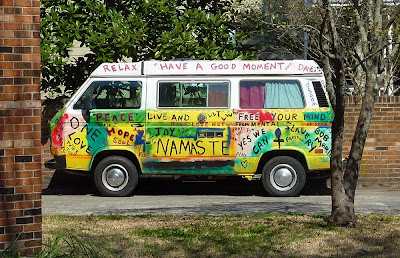 ...and some interesting vehicles.
Nowadays, the population of New Bern has doubled. Actually, during the 1950s, '60s, and '70s, the town was losing population year after year. In the '70s, the population declined nearly 7%. Then, suddenly, the population grew by 20% between 1980 and 1990. It's still growing. Old neighborhoods, including the historic district, were spruced up and people bought houses and moved back into town. 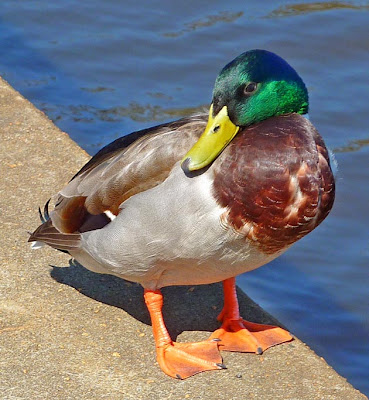 This duck begged for food on New Bern's river walk.
Prices still are not prohibitive by national standards. In fact, houses in Morehead City, closer to the ocean, are priced higher. A lot of people from other states and cities would be able to do what I did when I moved to France — sell an expensive house in another area and buy an equivalent house in New Bern for a lot less money. 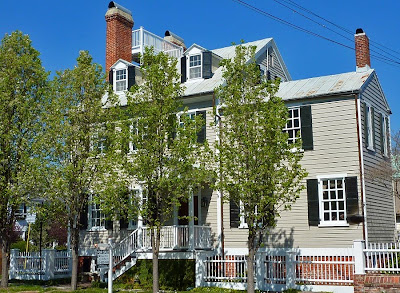 Historic house for sale in New Bern
The house in the pictured above, built in 1848, has three stories, four bedrooms, and four bathrooms, with separate living and dining rooms. It also has seven fireplaces and central air conditioning. It's over 300 square meters (3,200 sq. ft.) of living space and annual property taxes come to about $3,800 U.S. (2,700 €).

The selling price for this place, the Jerkins-Richardson house, is $620,000 (440,000 €). To me that's a lot, but this is a magnificent and historic house, judging from the pictures on the real estate agent's web site. I see many other nice houses in the New Bern historic district that are priced much lower.
Posted by Ken Broadhurst at 08:12