We are having a rainy week and we need the rain so no complaining. It's amazing how fast the ground here can dry out. We had so much rain all winter, but no matter. It's archi-sec outdoors now — or was until Sunday.

So what do you do on a rainy Monday? Especially on a Monday when there's not cooking to do because lunch is leftovers? Well, a major computer upgrade, that's what. Yesterday Walt installed Windows 7 on his seven-year-old computer. 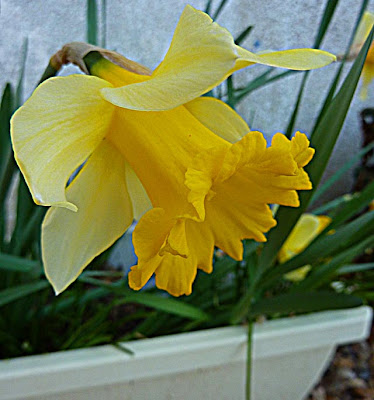 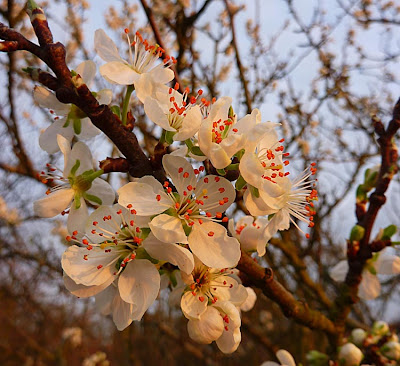 When a computer is that old — in dog years, one year equals seven, and it's about the same for PCs — you have to expect problems. Surprisingly, there weren't that many. The main one that cropped up has to do with the on-board Intel video adapter in the old Dell. That adapter does not support something called DirectX, so you can't customize screen colors as easily as with a DirectX-compatible adapter. Maybe a new graphics adapter is in order — and on order. 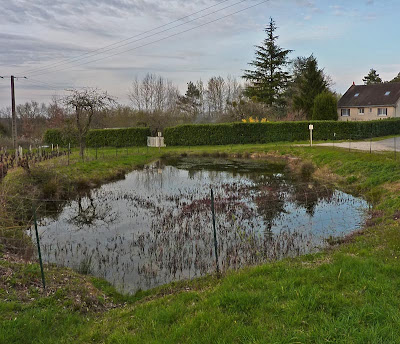 I'm expecting the pond to start overflowing again.
There were some problems with importing bookmarks into Firefox, but those mostly got resolved. The old bookmarks were saved by the installation program, I think. But finding them is not that easy. I'm not sure about the status of all that. By the way, all the old applications have to be re-installed too. And we've got a new version of Microsoft Office to deal with too — Walt uses Office, but I don't. 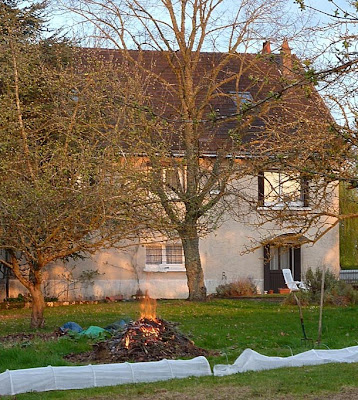 Last week's feu de jardin
There's a new version of Photoshop Elements to learn and explore. I brought that back from the U.S. too. The version we had before was in French, so not only do the menus in the new version have commands in different places and orders, but now they are named in English rather than French. How do you say accentuation, renforcement, or calque in English? We'll have to figure it out. 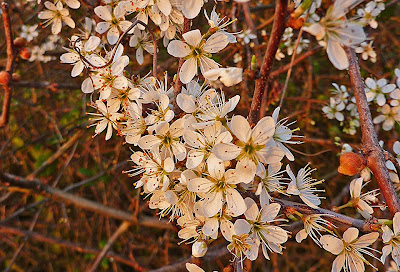 All in all, there were no major hiccups in the installation process. The Win7 installer was slow and the installation was long, but it went smoothly, saving the old Windows XP files so that W. could go back and find the documents and photos he didn't want to lose. He had backed up all his photos to a separate hard disk, so that they were safe and sound.

A new rain front is moving in today, so more computer configuring and cursing are going to be the main activities around here. Meanwhile, our spring crops — collard greens, mustard greens, salad greens of different kinds, radishes, and leeks — are getting a good soaking. It's just what they need.
Posted by ckb at 06:50