I have some more to say about canned food in France, but first, here's a pizza topped with spicy pumpkin purée, smoked chicken, bell peppers, and alpine cheese. It was Walt's idea, and he made it while I was out shopping yesterday morning. We both enjoyed eating it.

I'm saying pumpkin but what Walt used on the pizza was actually the puréed flesh of a roasted sucrine du Berry, which resembles a butternut squash. He seasoned it with hot pepper powder, onion, garlic, and dried herbs. It replaced the tomato sauce you would usually put on a pizza, with the other toppings spread over it. 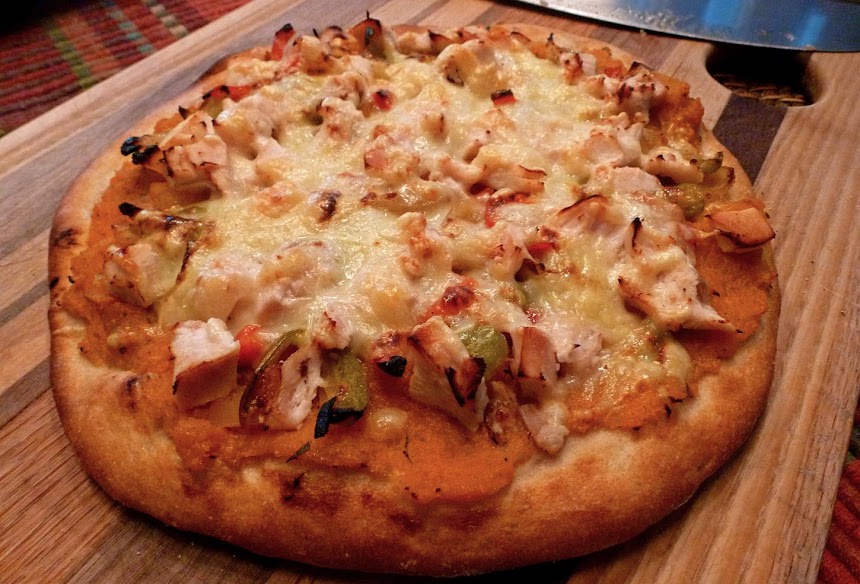 The smoked chicken was one that I bought at Intermarché a few days ago to have with a batch of choucroute garnie (sauerkraut). We had half of it left, so I de-boned the breast filet and shredded/chopped the meat. The bell peppers came frozen from the Picard store over in Romorantin, and are a mix of red, green, and yellow peppers. They're an excellent product. Walt said he sauteed them with just a little bit of honey to caramelize the strips of pepper.
Posted by Ken Broadhurst at 07:00