[Here's a link to the first installment of this series.]

I knew the short form of the birth certificate wouldn't satisfy requirements in France because we'd already been caught in that trap. Walt's short form certificate had been accepted in Blois when he applied for his carte de séjour but rejected by the health insurance system here a few years later. He'd obtained the long-form document on one of his trips to Albany NY, translated it, and taken it to the health insurance people, who were then happy with it. 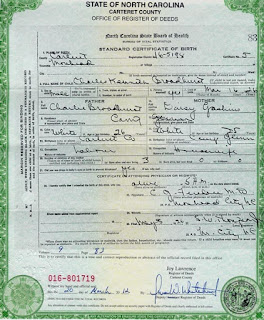 When we looked carefully at the birth certificates we had been able to get in North Carolina (example on the right) and in New York, we realized that they were pretty much illegible in many places. They had to be translated. How would a translator be able to decipher them? On the N.C. documents, it was handwritten information — people's names, signatures, place names — that was unreadable. On the N.Y. documents, it was the printed matter on the form itself that was illegible, because it was in such small type and the copies, made from microfilm, were of such poor quality.


Besides all that, we had to get special authentication papers called apostilles for every document we were going to submit. You can only get those in the states where the documents originated, but not at the U.S. Embassy in Paris, because the U.S. federal government does not keep records of things like its citizens' births, deaths, divorces, and marriages. Those are matters left for the individual states to deal with, and the U.S. states don't have embassies and consulates in other countries.


We had never before been asked to have apostilles for our birth certificates. During all those years when we turned in birth certificates and information about our financial resources, nobody at the local government level had ever required or even mentioned them. The apostille is a document that resulted from a treaty signed by European counties including France, along with the U.S., Australia, and Canada, as a way to guarantee that documents handed issued on one country and handed over in another really are authentic and are not counterfeit. It's a special kind of international notarization, and the French national government in Paris and the court system requires them. 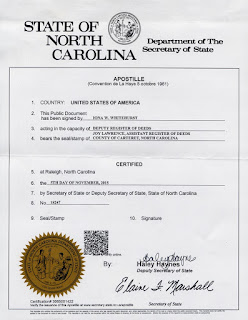 To get the apostilles, I had to take or send my and my father's birth certificates, for example, to the office of the secretary of state in Raleigh, North Carolina. An official there would draft and sign the apostilles. In each case, the apostille I ended up getting was glued to the birth certificate to prevent the two pages from being separated. Each one required payment of a $10 fee by certified check or money order.


I was not aware of any way able to get a money order or a certified bank check in U.S. dollars here in France. So I had to do all that in N.C., or have somebody do it for me. On one of my trips, I mailed everything in rather than make the 300-mile drive to Raleigh and back from my home town. The original documents are mailed back to you if you send in a self-addressed, stamped envelope. In France, I didn't have any U.S. postage stamps, or any way I knew of to get any. So I had to go get them in the U.S. as well. For my mother's South Carolina birth certificate, the process was the same, but the fee was just $2.00. By the way, it's interesting that apostille is a French word but there's nothing in French on the document itself.


There was one other solution. There are outfits that will obtain the apostilles for you and mail them to you in France. The one we contacted in New York wanted $200.00 per apostille. Yikes! We have nine apostilles for nine separate documents at this point. The fee was too high.


Walt had the same issues for New York, or worse. Remember when I said that his parent's birth certificates were stamped "For genealogical research only"? They weren't certified, legal copies, because he was not allowed to obtain certified documents for his parents. It's the law there. And when Walt was in Albany, he learned that for uncertified documents you can't get an apostille.


Walt was lucky that he was born and grew up in the New York capital city, Albany. He was staying with friends and family there. All the state government offices are there. We don't really know if our parents' birth certificates need apostilles, but we know ours do. It was better to get the apostilles for everything while we were in the U.S. rather than find out later that we needed them and would have either to pay a large fee to get them sent here, or make another trip to the U.S. to get them.


The next step would be to get everything translated into French. We couldn't do the translations ourselves. They had to be done by a court-accredited translator.