I've been eating a lot of food out of cans over the past two or three weeks. Strange, isn't it? I love to cook, but I also like to try foods in a lot of different forms and packages to see if they're good. It's a kind of a sanity check to see how your own from-scratch cooking compares. 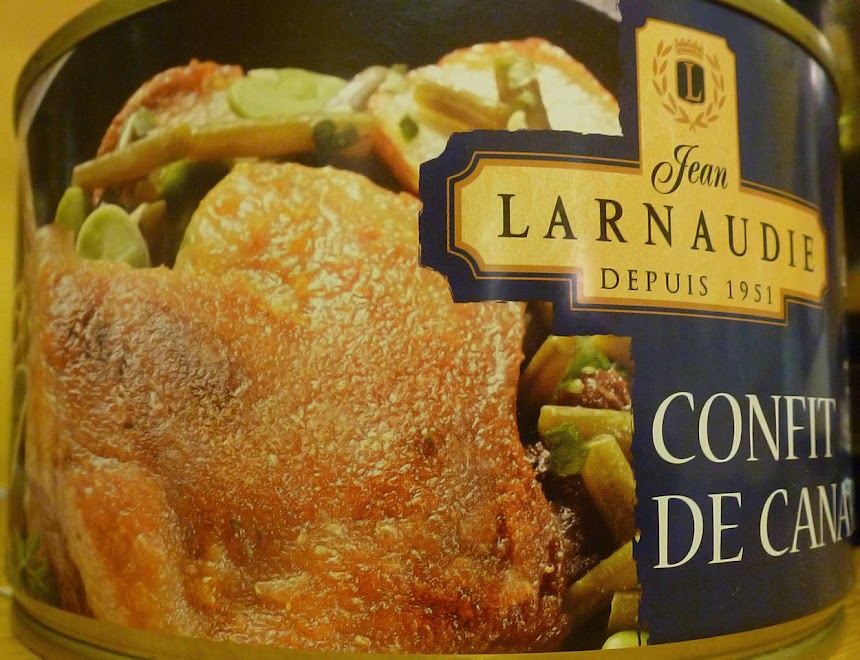 Of course, one of the foods I've bought in cans (or tins, if you prefer) is slow-cooked duck legs packed in southwestern France. They are kind of a luxury item — not on the scale of duck foie gras (fattened liver), but not cheap either. I showed a photo of the duck legs in my blog post yesterday. Above is the can our New Year's Day duck came in. Below is another brand I bought to have later, in the spring. 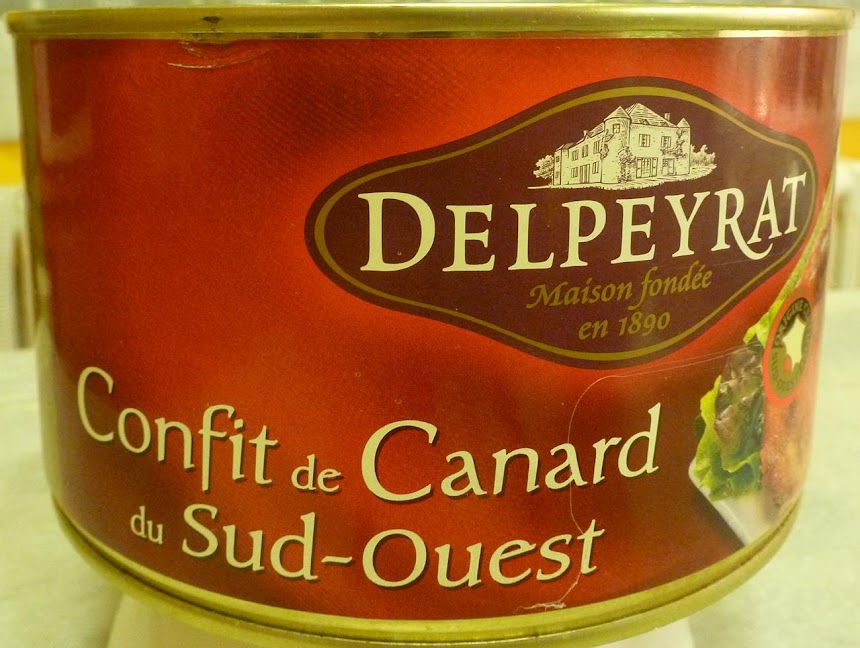 One reason I've bought duck legs in cans is because I haven't found them lately in the shrink-wrap (sous-vide) packaging they often are sold in here in France. What's the difference, really, between canned products and the trendy sous-vide packs? I have to admit that I've also been attracted to the big cans of canard confit because they've been on sale at about half-price (seven to eight euros for a can containing four or five nice plump duck leg-and-thigh pieces). 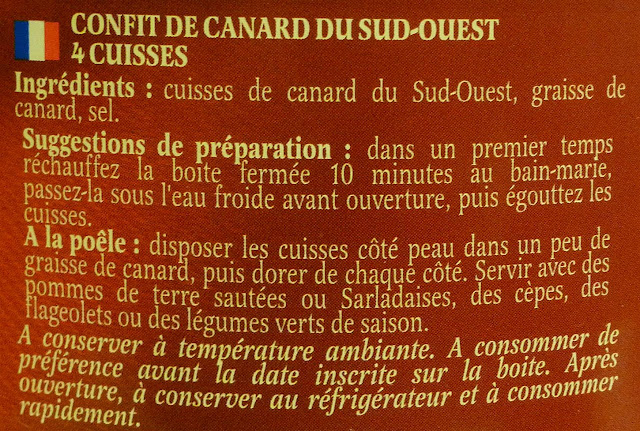 And look at the ingredients. There's nothing added, if you can believe the label. No additives, I mean. It's just duck legs, duck fat, and salt. 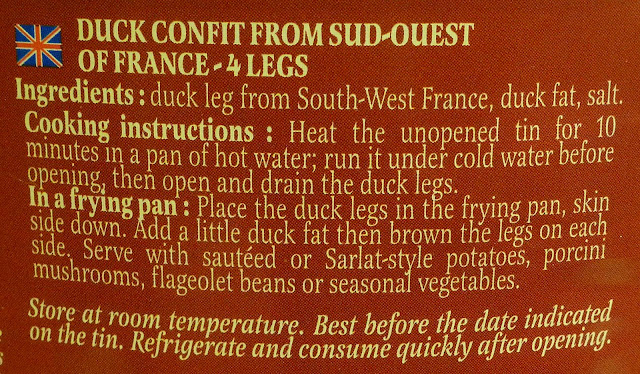 Here's the label in English. It also gives cooking instructions. You can use the duck legs in cassoulet (with white beans, etc.) or serve them with lentils. Or with Sarlat-style potatoes, which are cooked in duck fat. Or other ways — all delicious, I'm sure. 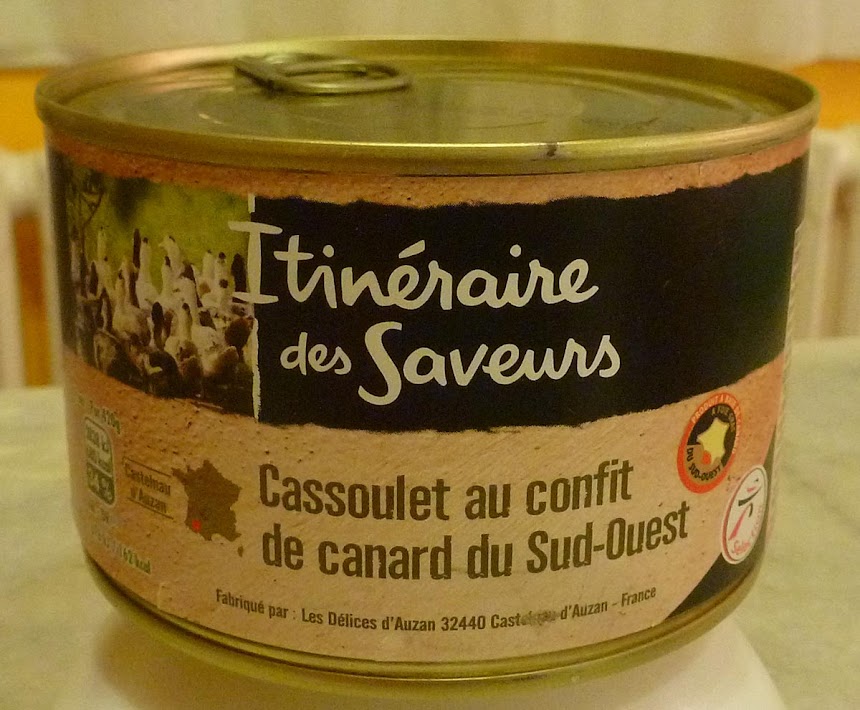 I made my "fusion" cassoulet-style Jan. 1, 2017, dinner using black-eyed peas and duck legs. There are cultural reasons for that — superstitions about what will bring good luck for the new year — but also personal preferences. I would be unhappy with a black-eyed-pea-free diet. I guess it's partly what you grew up with. But if you want to go all the way in France, you can just buy your cassoulet in a can (above). It can be very good (and not cheap) if you buy the real thing, cooked and canned in SW France and containing white beans (think of Italian cannellini beans — white kidney beans), duck confit, and Toulouse sausages. 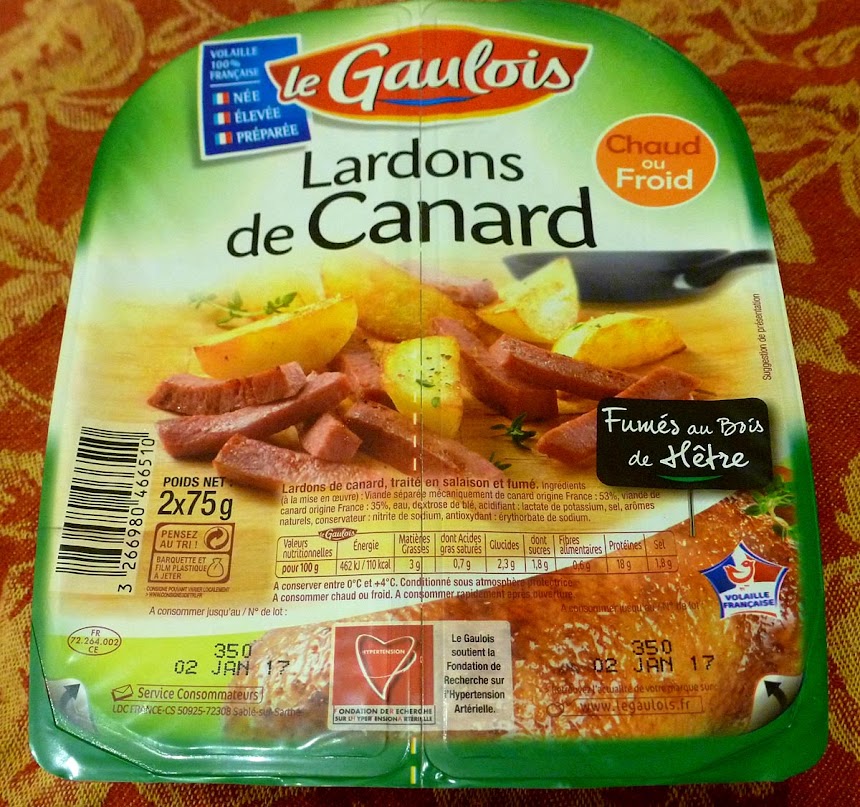 This year, I cooked my black-eyes with smoked duck lardons. Normally, lardons are chunks of what is called lard in France, which has not much to do with American lard (saindoux). French lard would go by the names bacon or pork belly in the U.S. But lardons are a concept nowadays as much as a specific product in France. They are little chunks of meat, often smoked or brined, that go into vegetable dishes, stews, omelets, or quiches as a flavor ingredient. There are chicken, turkey, and duck lardons on the shelves of the supermarkets here in France.
Posted by Ken Broadhurst at 07:40