Yesterday I made osso bucco, the Milanese veal dish — and with real veal, not turkey or some other substitute. It had been years since I'd cooked, or eaten, osso bucco made with veal shanks. I think it was in San Francisco. I see a 2013 post on this blog showing a turkey osso bucco that I made back then. 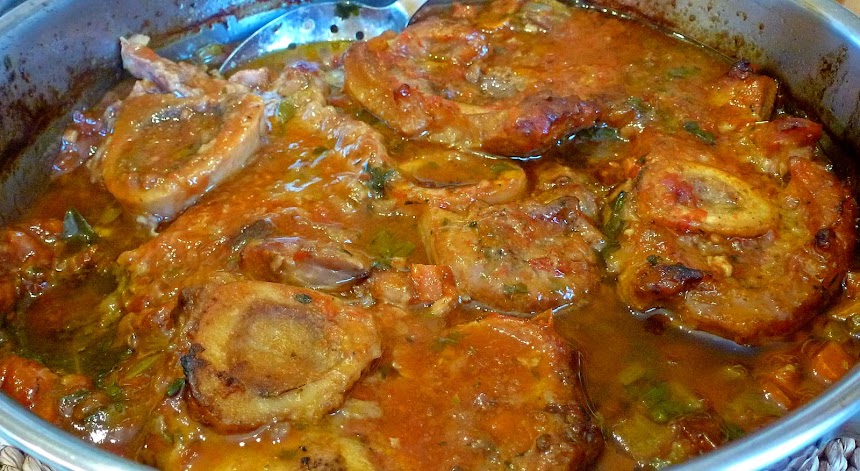 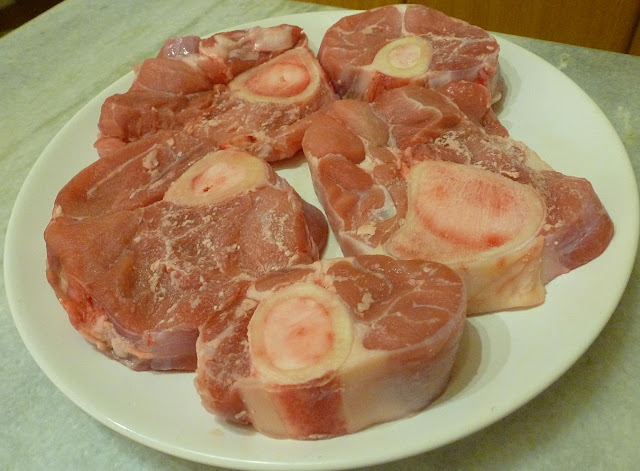 It's all because I went grocery shopping at SuperU a few days ago and I noticed that they had two packages of sliced veal shank for the price of one — about half-price, in other words. That's hard to resist. It was very pretty meat too. In total, it weighed just a little less than 2 lbs. (850 grams). I think it cost about six euros. 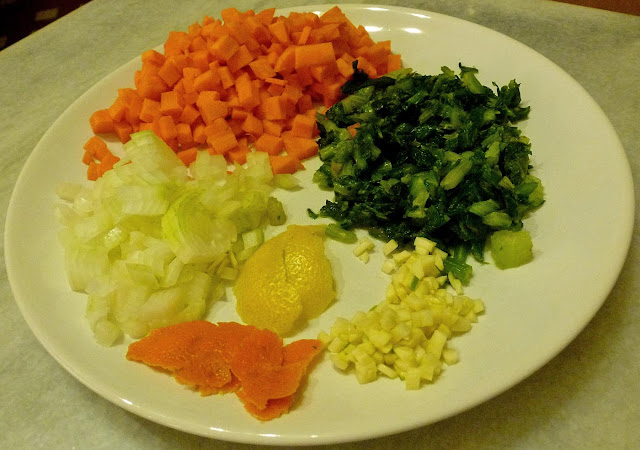 The first step in making osso bucco is to finely dice the aromatic vegetables that will go into the sauce — a big carrot, a medium onion, a stalk (une branche) of celery, two cloves of garlic. And then cut a couple of strips of zest (rind) from a lemon and the same from an orange. Put everything but the zests into a pan with some olive oil or melted better, on low heat, and "sweat" the vegetables for 10 minutes or so. 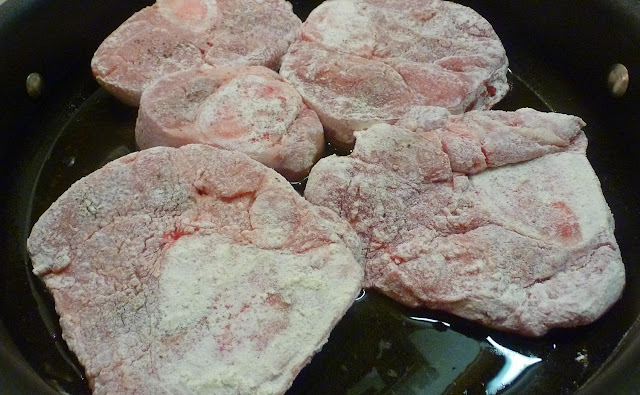 Meanwhile, dredge the slices of veal shank in seasoned flour. Shake off any extra and don't let the veal sit very long before browning it in frying pan on medium-high heat. You want the flour to stay dry and then brown lightly. 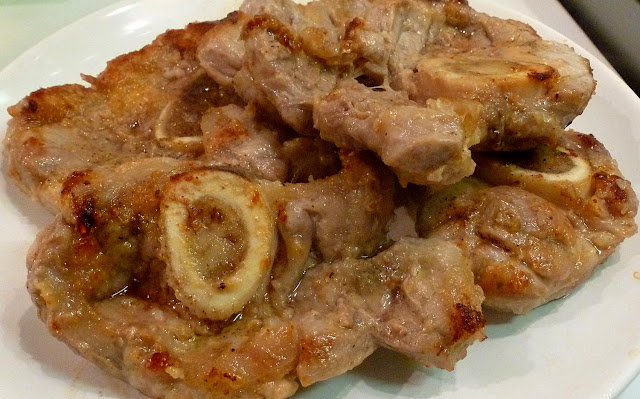 Set the veal aside and deglaze the pan it browned in with a cup of dry white wine. Before pouring in the wine, you can spoon some of the oil out of the pan if you think there's too much of it.

Then pour about 350 ml (1½ cups) of either chicken, veal, or vegetable broth and the same amount of tomato sauce (or chopped tomato) into the pan and let all that cook together for a few minutes.

Place the browned veal slices on top of the sweated vegetables in the other pan, and then pour the sauce from the frying pan over all. It should be just enough to barely cover the veal, which should be in a single layer. Adjust the amount of sauce as necessary, using less or adding water if you need to. 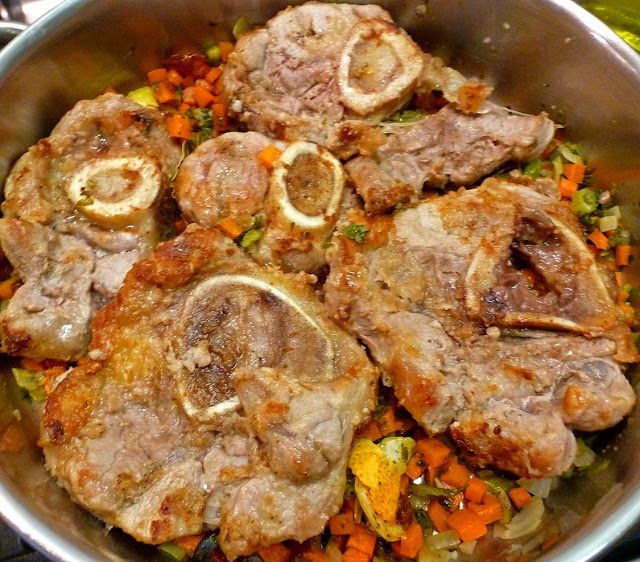 After you've poured the sauce over all, set the pan in a slow oven (say 150ºC, 300ºF) for two hours or more (see the top photo above). Add a couple of bay leaves, a pinch of thyme, and the zests of orange and lemon. Cover the pan tightly. Check it a couple of times per hour to make sure there's still enough liquid, adding some water to replenish what has evaporated and keep the veal moist. 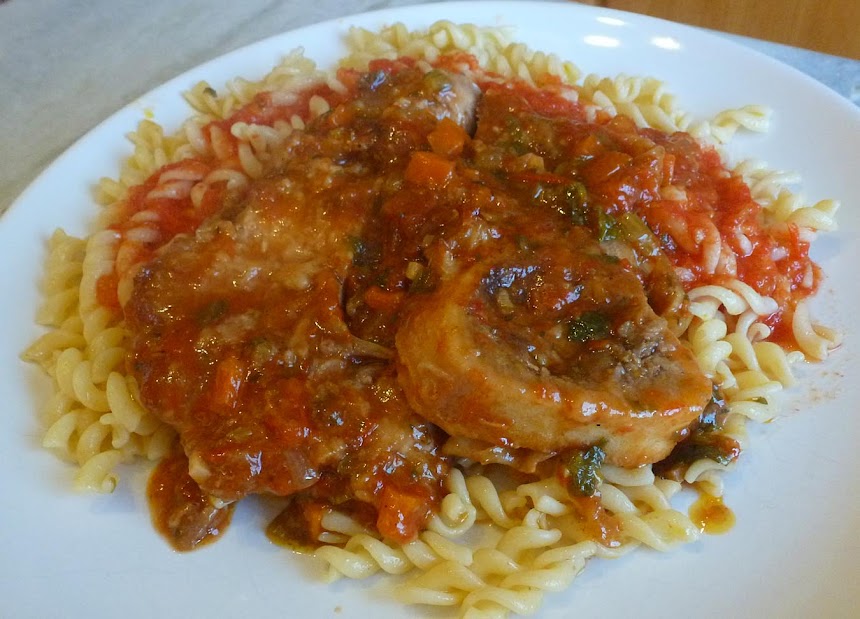 Serve the osso bucco with rice or pasta. The veal bone marrow will have mostly melted into the tomato-vegetable sauce, thickening it. The flour you coated the veal in before browning it will also act as a thickener. The citrus peels will add an extra burst of flavor to the dish. The meat will be tender and succulent. We enjoyed it.
Posted by Ken Broadhurst at 07:30