The temperature this morning is negative four degrees C. That's the mid-20s in F. The thermometer in the greenhouse reads positive three degrees C, so that's working out fine. I turned the electric radiator on in there a few minutes ago anyway.

Yesterday for lunch I made a kind of quiche called « un toutché ». It's also called a « gâteau de fête » or « gâteau de ménage ». Instead of a regular pie crust (pâte brisée), this egg custard pie has a crust that resembles brioche — made with a dough that contains eggs, butter, milk, and cream. The recipe comes from Franche-Comté in eastern France, and it is not really well known in the rest of France. 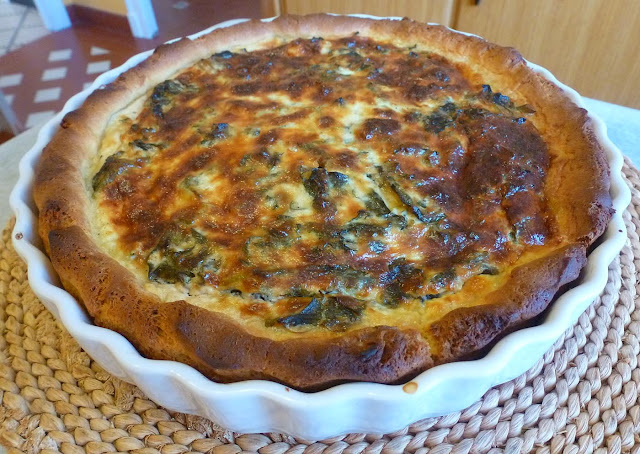 The toutché is made as either a sweet cake or a savory pie (those are links to recipes). The simplest savory version is made with an egg custard and smoked pork lardons. I "enhanced" that by adding some chopped onion and some cooked kale. I had picked and cooked kale on Monday in anticipation of our freezing temperatures this week. I also added a little bit of grated Comté cheese for flavor. 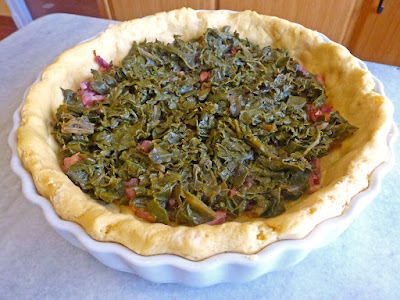 The dough for the toutché shell rose in the (unheated) oven, protected from drafts, for two hours, and it basically doubled in volume. To line the pie plate, you butter it first and then put the ball of dough in the middle of it. You don't need a rolling pin — you can just use your fingers to spread the dough out in the pan. Form a good tall edge all around to hold in the egg and milk custard. 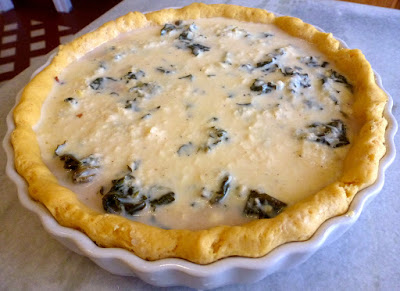 Spread the dry ingredients (lardons and, optionally, sautéed onion and cooked greens) on the crust and pour the custard mixture over them. Then bake the pie in the oven at 180ºC (350ºF) for about 30 minutes until it's golden brown on top (see above). 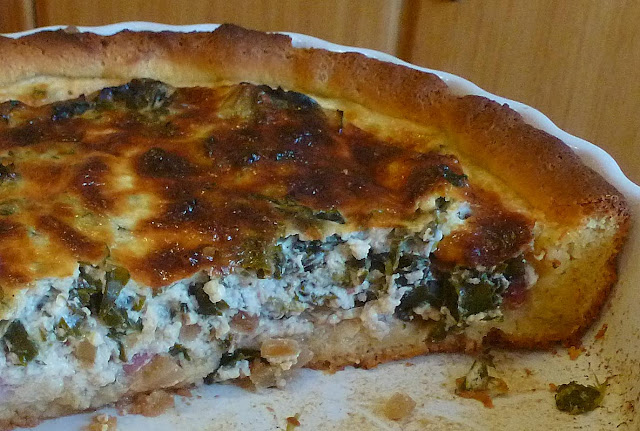 You are supposed to eat the toutché either warm or cold, from what I've read. We ate it more or less hot as our main course at lunch yesterday. We didn't have a salad because we figured the kale took its place.
Posted by Ken Broadhurst at 07:00