Bread-making according to la méthode Lemaire

The bread we buy from the bread lady actually comes in a bag. I say that because often in France you are — or used to be — just handed a "naked" baguette (the smaller, skinny loaf that weighs 250 grams) or a pain (the fatter, full-size loaf that weighs 400 g) with no wrapper on it at all. That's less and less the case these days, I think, but when we buy an "ordinary" baguette from the bread lady, it comes without a wrapper of any kind.

The baguette de tradition française that we usually buy comes in a paper bag. I've scanned one of the bags the baker uses so you can see how it is labeled. What it says on the right is:  "Bread in the French tradition, leavened with natural yeasts and cultures by an artisan baker according to the Lemaire method." In other words, it's not made in an industrial bakery but by the local baker in his own shop, from scratch. Here's a link to the Pains Lemaire web site. 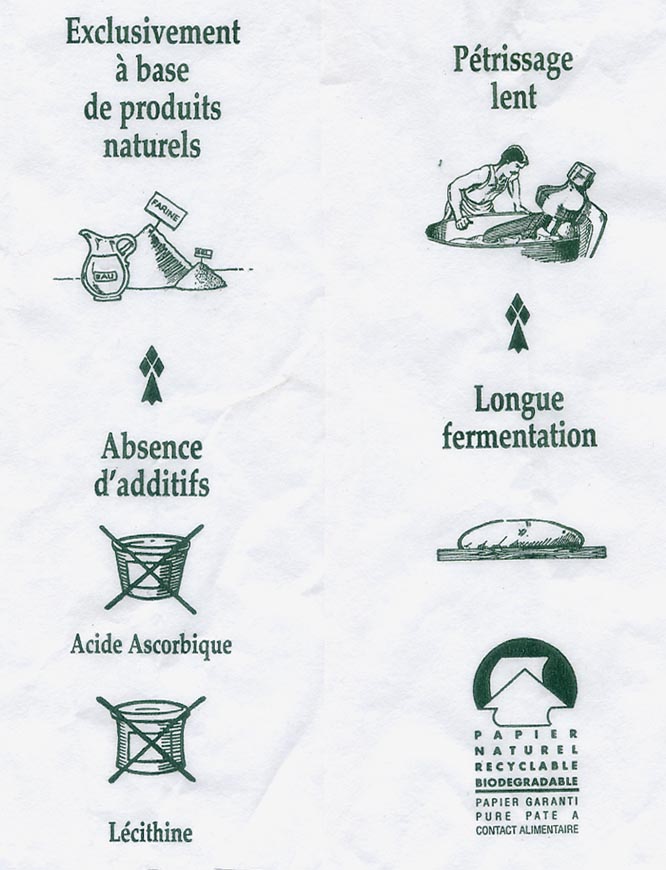 The méthode Lemaire was defined by a man named Raoul Lemaire back in the late 1950s. Lemaire was a pioneer of organic farming in France, and the bread made according to his method is made from organically grown wheat that is stone-ground into flour, with no additives. It requires slow kneading (pétrissage lent) and a long, slow rise (longue fermentation).  Levain is the starter culture used to make sourdough bread, but the bread we get doesn't taste sour the way San Francisco sourdough bread tasted when we lived out there. 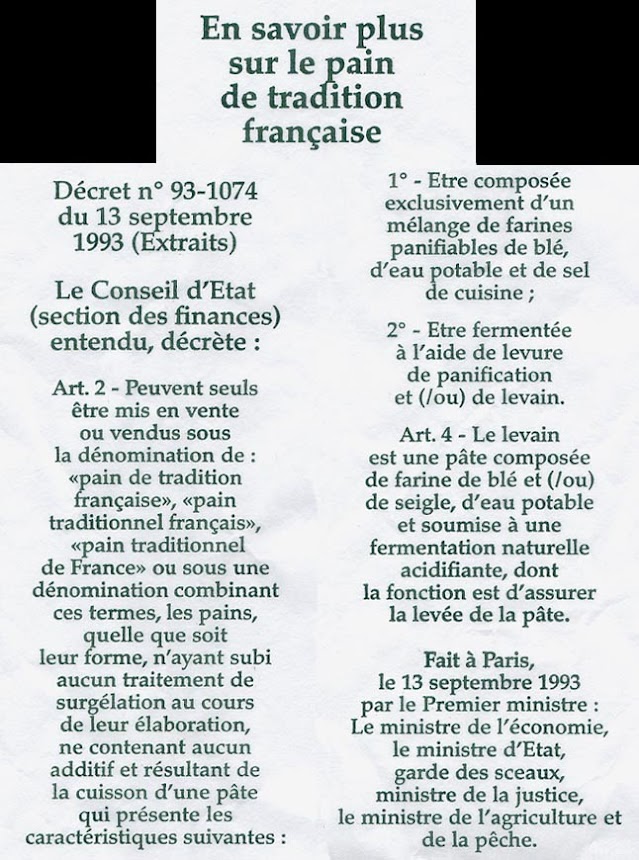 The text above gives details of French government rules defining the composition of bread that carries the name "traditional French bread" or any name using those terms. It has to be made with wheat flour, drinking water, and table salt, for example. Ingredients must be fresh, and never frozen at any stage. The starter culture (sourdough) must be made with wheat flour or a combination of wheat and rye flour, along with drinking water, and it has to be the product of the natural fermentation ("souring") process (without the addition of ascorbic acid, in other words). The regulations date back to 1993.