I guess the translation of the title — which means "figs slow-cooked and preserved in sugar" — would be candied figs. I hope they don't end up really tasting like candy, though. I want to eat them as a garnish with goat cheese, blue cheese, foie gras, or pâté. I'm thinking of Thanksgiving, Christmas, and New Year's Eve.
Here's the recipe (or method) I found on the web: 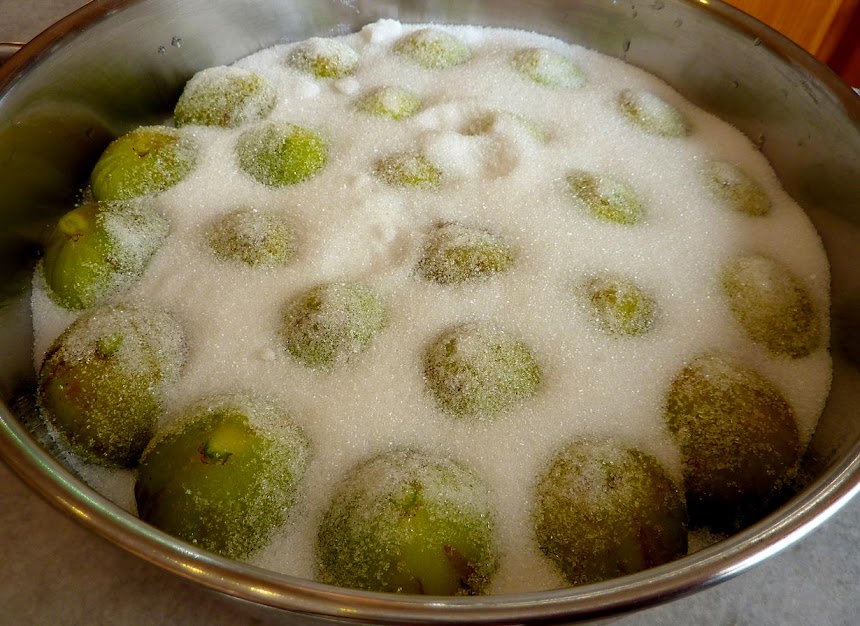 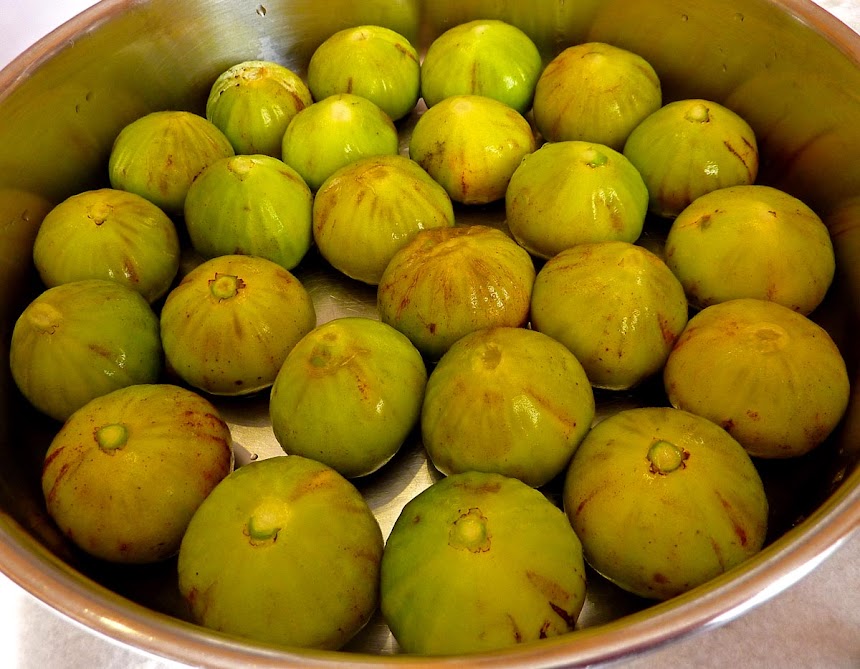 Yesterday, I used as many figs as would fit in one layer in a big, low-sided sauté pan. That turned out to be 24 figs. I weighed those and they came to 500 grams, or just over a pound. So I weighed out 500 grams of sugar and poured it over the figs. 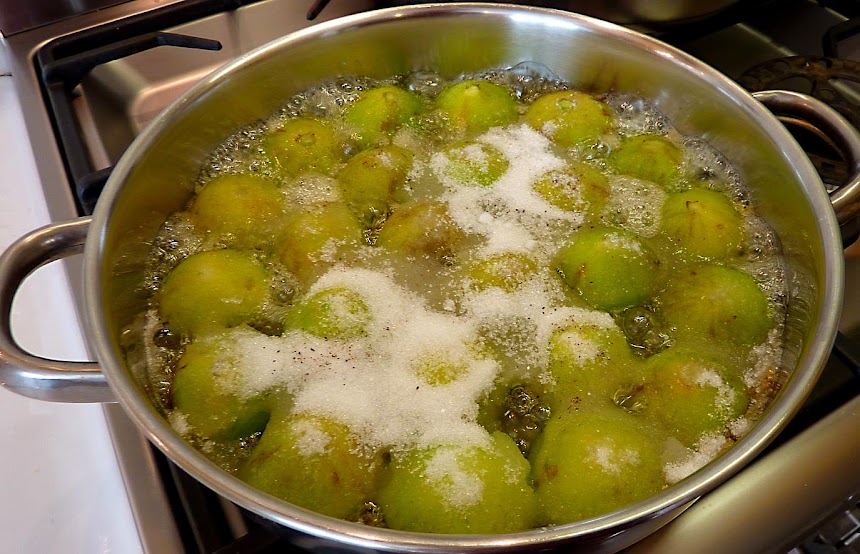 Then I cooked the figs and sugar for 10 minutes on medium-high heat. The sugar turned into a syrup. The pan of figs in syrup spent the night down in our cold pantry, which is about the equivalent of putting it in the refrigerator overnight. 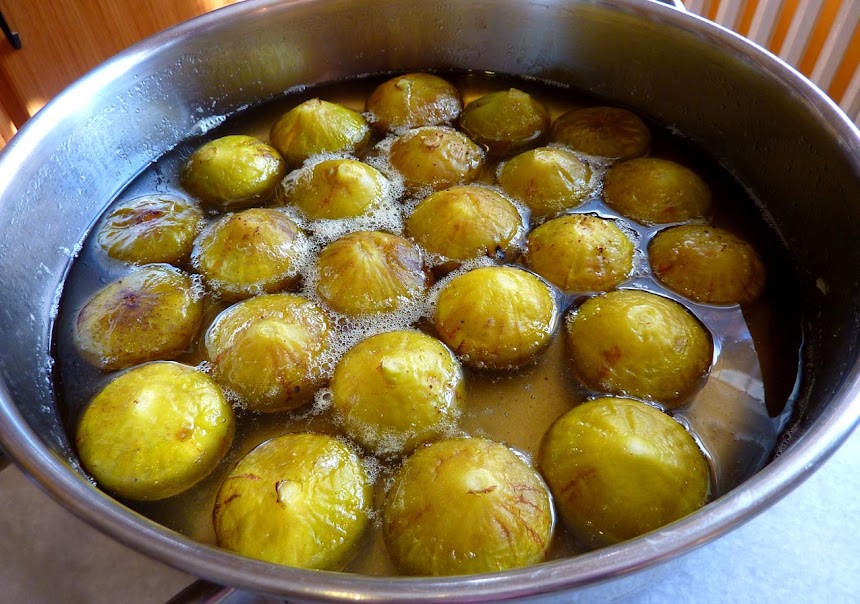 Today, I'll cook the figs a second time, as the recipe says to do. This is risky to blog about, because I don't know how it's going to come out. Hope it works — I'll let you know. Tomorrow I'll find out. I'm thinking I'll try to dry at least half the figs on a rack and put them away as directed. The other half I will put up in a jar or two in the syrup. (Jump to this post to see how the preserved figs came out.) 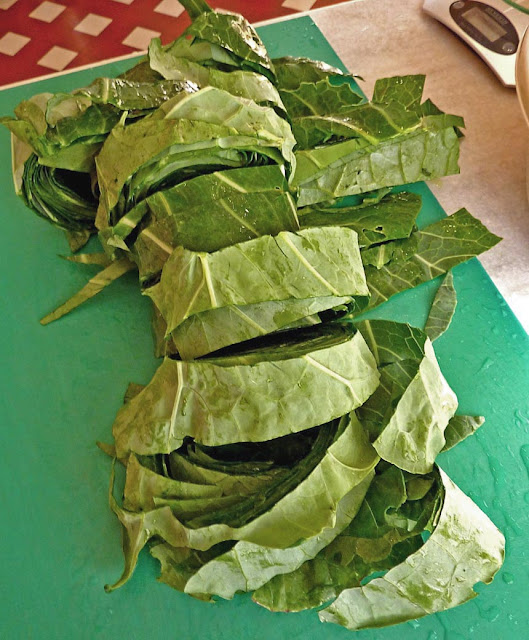 Yesterday I also picked another "mess" of collards to cook for lunch. I cut 24 large leaves (there are six plants), washed them well, and then cut out the thick central rib of each. At that point I weighed them — I had 1.4 kg, which is the equivalent of 3 lbs. That means each trimmed leaf weighed 2 oz. (24 leaves for 48 oz.). I took about six leaves at a time, stacked and rolled them up, and cut them into strips.

This is about a quarter of the collards I harvested and cut into wide strips. 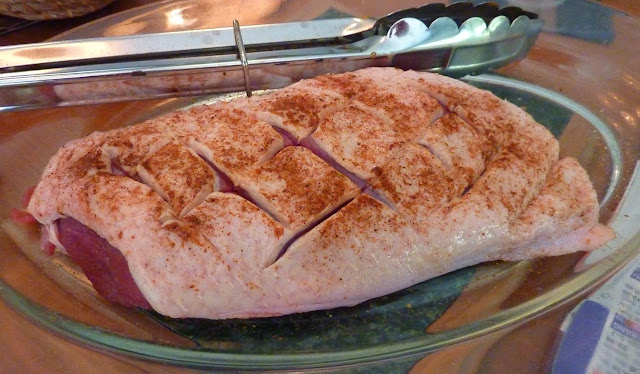 With the collards, which
I cooked for at least 2 hours
in a mixture of
chicken broth (about a liter),
duck fat (4 Tbsp.), and
white wine (one cup),
we had a grilled duck breast. This is the time of year when ducks are slaughtered in France, so it's easy to find whole ducks and parts for really good prices. This breast weighed nearly a pound
(400 g).
Posted by Ken Broadhurst at 07:45