Our eggplant crop was a complete failure this year. Luckily, over at Intermarché I found pretty, plump, round aubergines in the produce department for just two euros per kilogram — about a dollar a pound. We were still hoping for some home-grown eggplants at that point, but the weather turned very rainy and that was the end of such hopes.

I had my heart set on eggplant dishes including ratatouille, eggplant parmesan, and (above) Greek moussaka. If I had to buy the eggplant, tant pis. At least the store-bought aubergines were grown in France, according to the sign in the produce department. 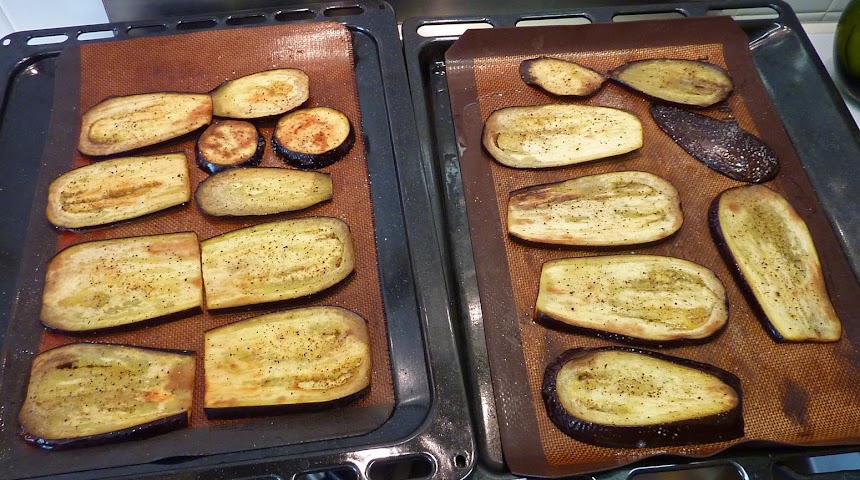 I guess I didn't take any photos of the process of putting the moussaka together. It's a layered casserole of potatoes, a meat sauce made with tomatoes (from the garden, in our case), red wine, and spices including cinnamon and nutmeg, pre-cooked eggplant slices, and a stiff bechamel sauce with grated cheese in it. I used ground beef for the sauce, but ground lamb might be even better.
I like to pre-cook the eggplant slices, brushed with olive oil and seasoned with salt and pepper, on baking sheets in the oven, as you can see above. It's less messy that frying and requires less work. Cook some thinly sliced potatoes the same way and use them as the bottom layer of the moussaka.
Here's a recipe that I first posted in 2010:

Cut the eggplants into rounds ¼-inch thick. Put the slices in a colander, salt them generously, and let them disgorge or “sweat” for an hour.