If you've been following the Dieudonné controversy in France, you might think the word « quenelle » means only the rude, politically charged gesture he and other French celebrities have been making to defy the authorities. Actually, I'm not sure why that truncated Nazi salute is called a quenelle [kuh-NEHL].


In culinary terms, une quenelle is a dumpling. The term derives from the German or Alsatian word knödel, which I assume gave us the English word "noodle." A quenelle is a big noodle made with flour, butter, and eggs. The most famous kind of quenelle — the one everybody thinks of first — a the fish dumpling made with the European river fish called a brochet, or pike. 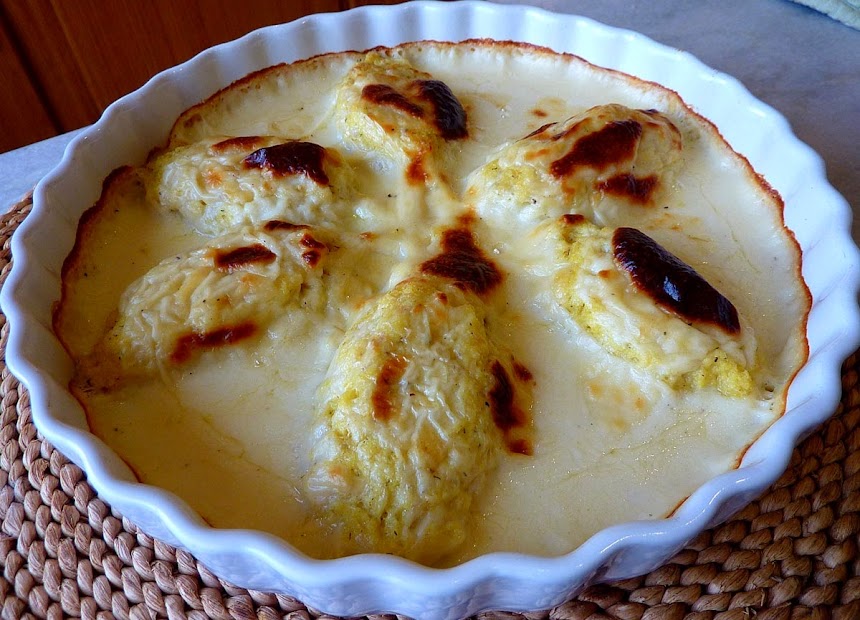 
I made fish quenelles the other day, but I didn't use pike. I used a saltwater fish called colin in French. That's pollock, and this was Alaskan pollock. You can make the dumplings with any fish you want. The base of the quenelles can be a flour paste, or it can be mashed potato, with egg to bind it together and some butter and cream to enrich it. 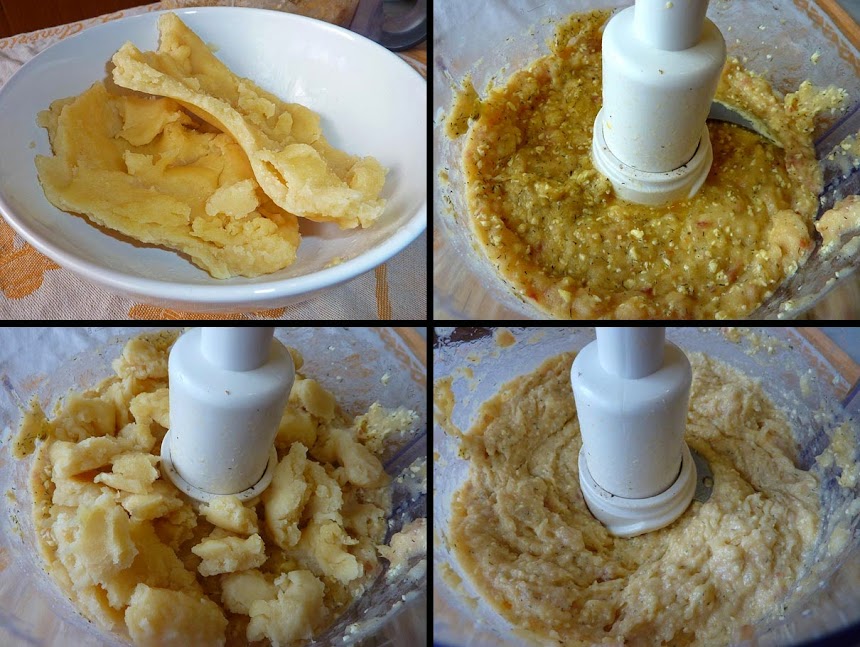 The chilled panade; the pureed fish and eggs; the panade torn into pieces and added in; the final quenelle dough.


If you use flour as the base, the first thing you do is make a panade. You melt butter in a sauce pan with hot water and then add a good quantity of flour. You stir that mixture vigorously until the flour forms a thick dough that pulls away from the sides and bottom of the pan. Panade, by the way, is also the basis for making what are called petits choux in French (because they resemble little round cabbages), or cream puffs in English. The panade ingredients are: 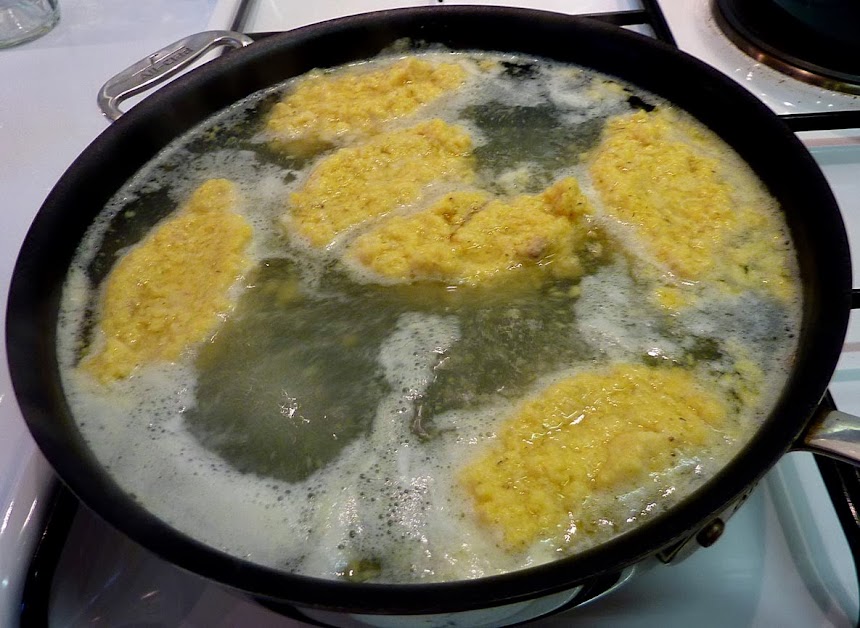 Poaching the dumplings in simmering water


While the panade is cooling in the refrigerator (it needs to be well chilled when you use it to make the dumpling dough), in the bowl of a food processor puree about 10 oz. (300 grams) of raw, boneless fish filets with a couple of eggs and an ounce of butter. When you have a smooth puree, add the cold panade to the food processor. (Cut the fish and the panade into small pieces before you process it all.) You'll end up with a sticky dough. (We ended up with 10 large dumplings, using these quantities.) 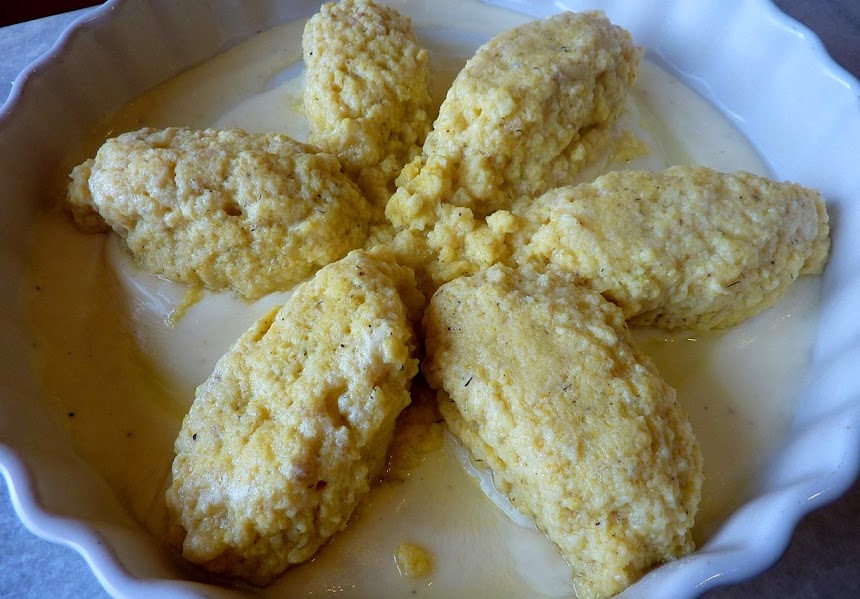 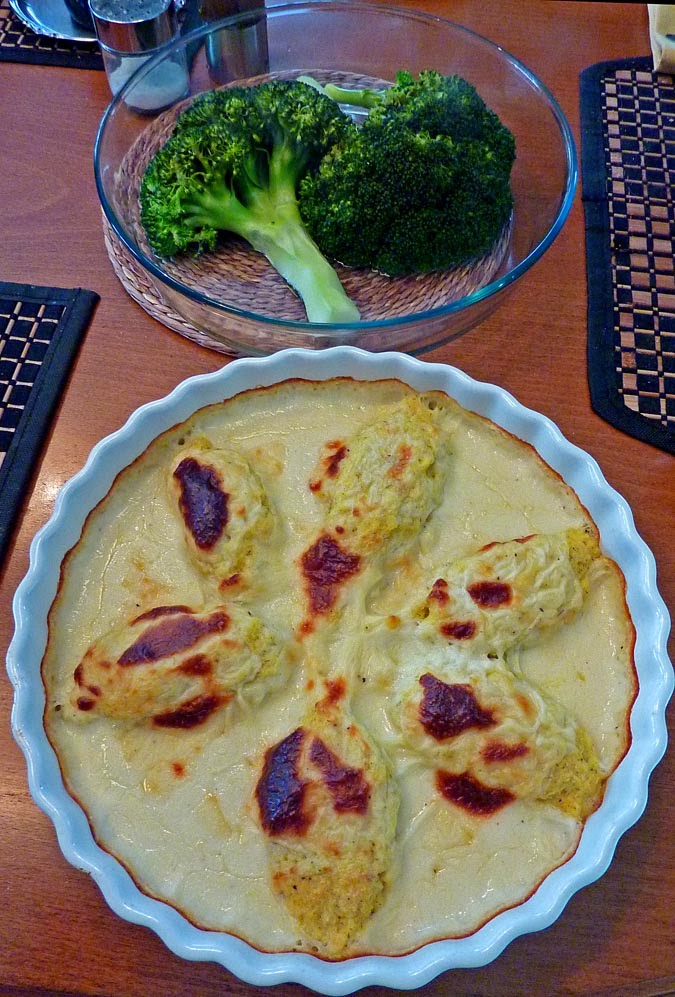 Add a little cream for richness, and add a little more flour if the dough is too sticky. Add a good amount of salt and pepper, and a pinch or grating of nutmeg. You can also add fresh or dried herbs — parsley, oregano, or dill, for example — or spices like ground cayenne pepper or curry powder. I used dried dill weed, and I added a teaspoonful of turmeric (curcuma) to the dough for color. Let the dough cool completely in the refrigerator for a few hours before you make dumplings out of it.


To make the dumplings, use two big tablespoons or even serving spoons. Take a spoonful of the dough in one spoon and then scrape it out into the bowl of the second spoon. Repeat that operation several times until you have formed an oval-shaped dumpling. Drop the dumplings into a pot of simmering salted water or broth and let them poach at a low simmer for 15 to 20 minutes, or longer.

Serve the quenelles with béchamel, cheese, or tomato sauce, and with a green vegetable or a salad. We had steamed broccoli with ours. I poured some béchamel (a white sauce made with butter, flour, and milk or cream) over the dumplings and then browned them in the oven.
Posted by Ken Broadhurst at 09:00