Today is crêpe day in France. It's a holiday called La Chandeleur (Candlemas in English) and millions of French people will make and eat thin little pancakes today. They're easy to make and even easier to eat. The photos in this post show different kinds and styles of crêpes that we've made over the past 10 years. 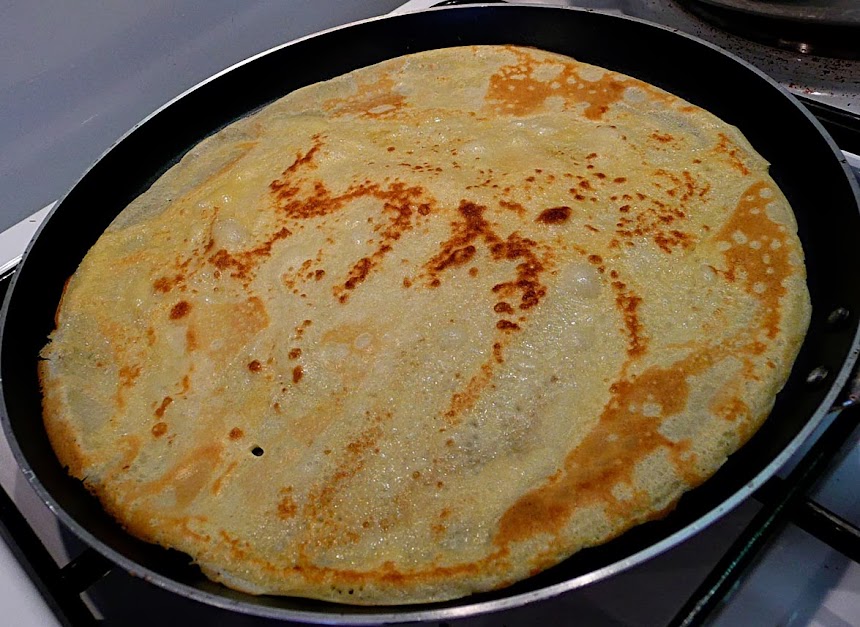 Walt and I always make crêpes on February 2. Today we are going to go whole hog and make two different kinds, savory and sweet. Both kinds are unleavened — no baking powder or soda goes into the batter. 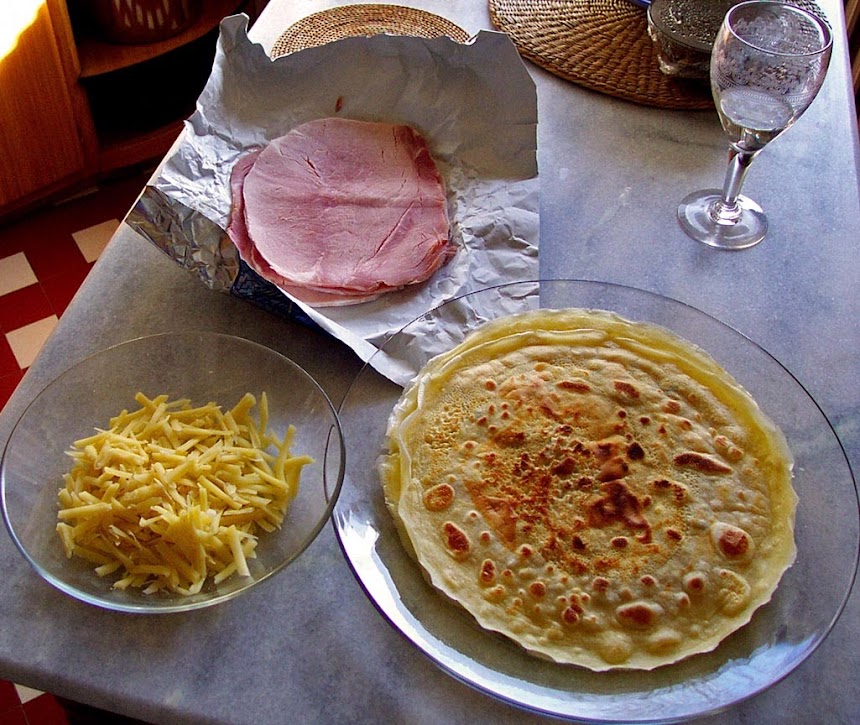 "Authentic" savory crêpes are made with buckwheat flour, called sarrasin or blé noir. These crêpes are also called galettes bretonnes, since they are a specialty of Brittany. They are cooked in a big skillet and then filled with or wrapped up around slices of ham with cheese and an egg. They can be folded or rolled up and then reheated in the oven until the cheese melts and the egg cooks. 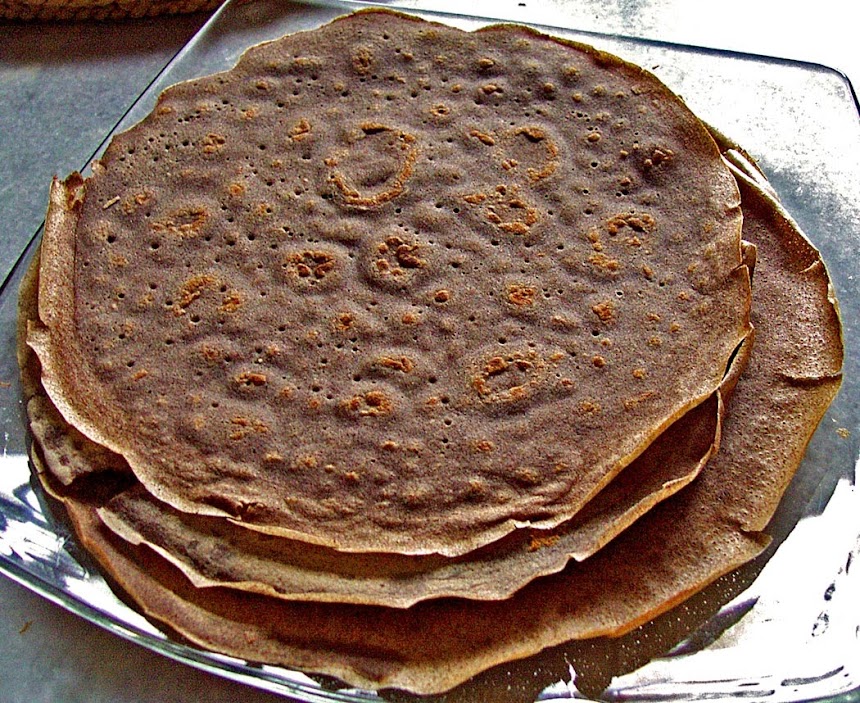 Sweet crêpes are made with white wheat flour (recipe in this old post). Some people put a little sugar in the batter, and some recipes call for a glug of rum. Otherwise the batter is just flour, egg, water, milk, and a dribble of vegetable oil. The richness of the crêpe comes from the filling. Since there's no sugar in the batter, the crêpe can be made either as a savory (salty) main dish or as a sweet (dessert) treat. We've also been known to make dessert crêpes out of galettes bretonnes... 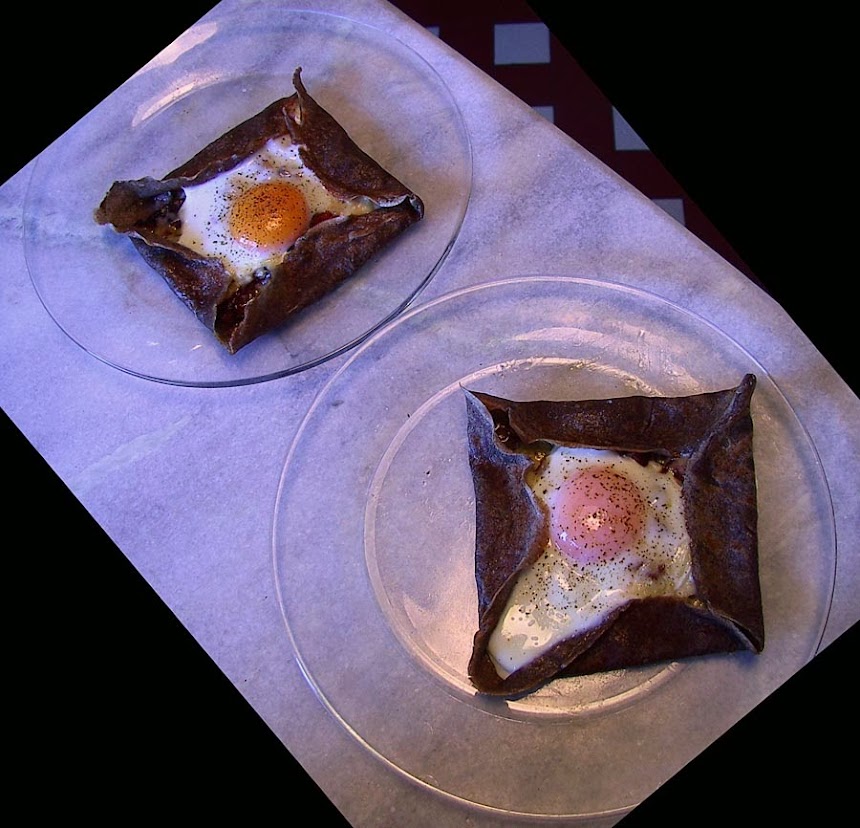 Simple sweet crêpes can be buttered and sprinkled with sugar, with a few drops of lemon juice added. Or they can be filled with jam or jelly. Then they get rolled up or folded and reheated in the pan they were cooked in. 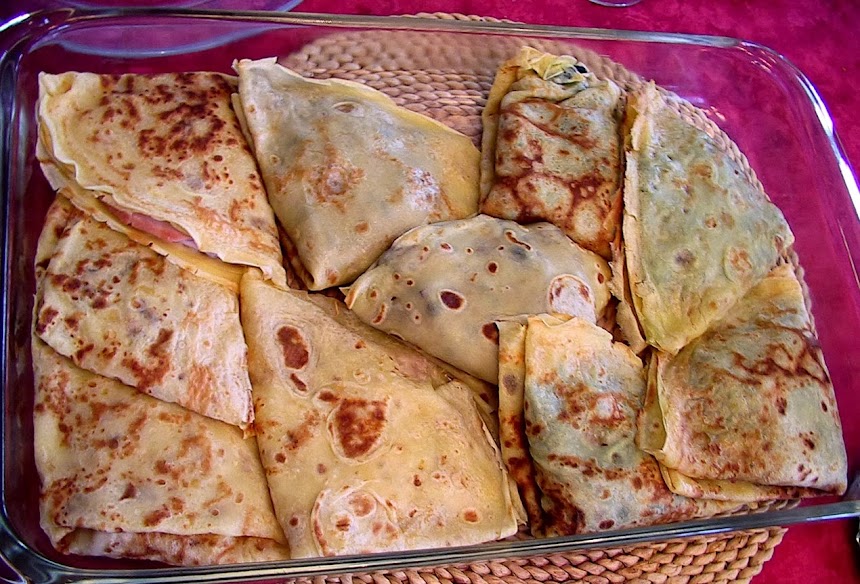 The word crêpe derives from the same root word that gave us "crisp" — the edges of the thin little pancake should be a little lacy and crispy. Tradition has it that you should hold a gold coin in one hand as you toss the crêpe to turn it over in the frying pan. That brings you good luck and prosperity for the rest of the year. Trouble is, I don't know where to get a gold coin.
Posted by Ken Broadhurst at 08:30