...on mange de la volaille. That's a take-off on an old French saying about game birds, grives and merles. Grives (thrushes) are tastier than merles (blackbirds). If you don't have the preferred ingredient, you substitute another, and you make do. In this case, I could have had veal, but chicken appealed to me.


I wanted to make a blanquette, or a white stew. The first ingredient is a white meat, of course, and the second is white wine. When you cook veal for a blanquette, you have to simmer the meat for a couple of hours to make it tender and succulent. When you cook chicken for the same dish, it takes only 30 minutes. So if you want something good, inexpensive, and quick, chicken (or some other fowl: turkey, Guinea hen...  even rabbit) is the way to go. 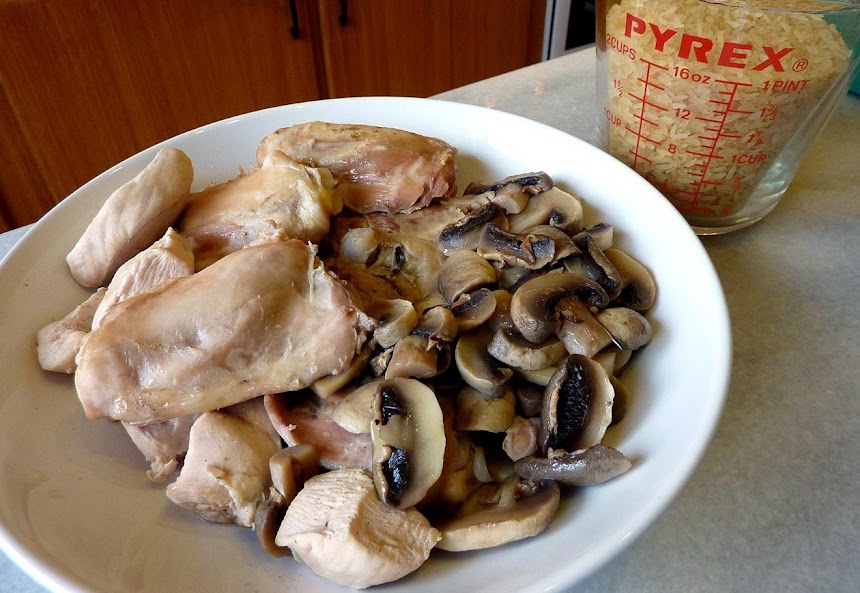 The chicken pieces (skinless breast and thigh meat) poached with mushrooms and ready to go
into the blanquette (white) sauce — sorry I didn't take more photos.


For two pounds of meat, you need about two liters, or about eight cups, of liquid. That would be six cups of water, or a mild-but-rich chicken or vegetable broth, with two cups of dry white wine added. Bring the liquid to a boil and drop in the pieces of meat. If you're starting with water and not broth, add a peeled carrot and an onion to the pot, along with a bay leaf or two. Don't forget the salt and pepper. Turn the heat down and let the chicken just simmer on low.


The other ingredient in a blanquette is mushrooms. Use any kind you want, but regular button mushrooms (champignons de Paris) are very good. Some recipes call for using canned mushrooms. It's up to you. As for cooking them, just drop them in the broth along with the chicken. Nothing in a blanquette needs to be browned.


Using a slotted spoon, take the chicken pieces and the mushrooms out of the cooking liquid. Reserve the liquid in a bowl or big measuring cup. In the pot you're using, melt some butter. Half a stick (or maybe a third — say six tablespoons) would be good. Into the melted butter, pour an equal quantity of flour. Stir the mixture on medium heat for three or four minutes so that the flour gets cooked.


Now pour about a liter of liquid into the pot a little at a time and stir vigorously to make a thickened white sauce. Gradually add more liquid until you have a velvety smooth mixture, neither too thick nor too thin. It's a judgment call. Taste the sauce for seasoning. A pinch or quick grate of nutmeg will add good flavor. Then pour in some cream (half a cup, or to taste) to whiten and to enrich the sauce.

Put the chicken and mushrooms back in the pot and let it all simmer slowly for 20 to 30 minutes on low temperature.At the last minute, squeeze in the juice of half a lemon to brighten it all up. Meanwhile, use the rest of the broth, extended with the required quantity of water, to cook a cup or two of rice to serve with the blanquette. And plan to make a nice green salad with a tart vinaigrette dressing to serve as a follow-up to the main course.
Posted by Ken Broadhurst at 07:30