This is one of those mornings when you just want to pull the covers up over your head and stay in bed. I woke up at 6:30 to the sound of hard rain. Actually, rain that sounded more like ice pellets slapping against the windows had awakened me at five. I finally worked up the courage to get up at seven. 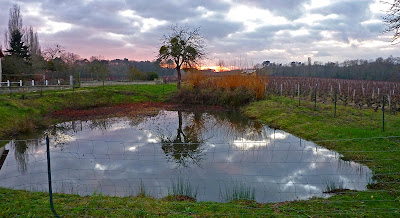 Not this morning, but an afternoon a few days ago
I knew I couldn't really stay in bed. The cat needed feeding, and the dog will need walking, even in the rain. With temperatures just above freezing, it won't be a lot of fun — at least for me. Callie won't mind unless it's raining pretty hard when we go out. We are supposed to have temperatures below freezing — finally — by Monday, with a chance of snow that day or the next. 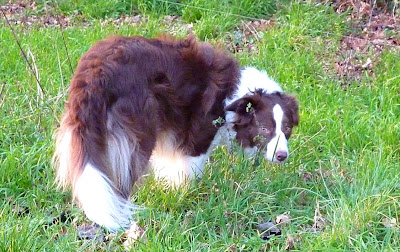 Another photo?
What do you do on a Saturday when it's chilly and damp outside? You don't go to the open-air market unless you really need to. Go to the supermarket? I did that yesterday. I forgot to buy eggs, though, so maybe I'll get the Peugeot out of the garage and go again. Cook something? No need — we're eating left-over coq au vin for lunch. Read? I'm trying to get through part of Michelet's Le Moyen Age, which is a history of the Middle Ages in France that was written in the mid-1800s. It's not exactly a thriller. 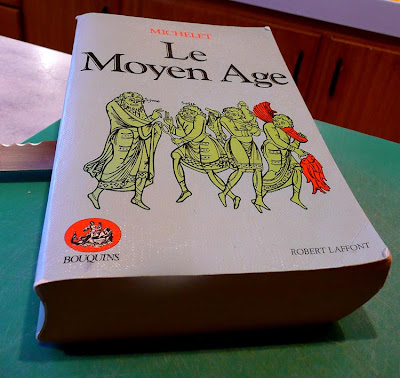 Michelet was born in 1798.
Michelet's book is a real pavé — a paving stone — of more than 1000 pages. I've been reading parts of it off and on, and over and over, since I bought it in Paris in 1981. Yes, '81. It seems like I've been reading the part about the lead-up to the 100 Years War for about as long as that war lasted. What I'm looking for this time is information about the Touraine province, where we live. I'd like to find a good book about the history of La Touraine. If you know of one... 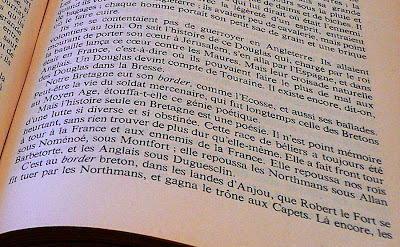 La Touraine is mentioned on this page. It says there was
a Scotsman named Douglas who became the
Count of Touraine hundreds of years ago.
Winter. A few months ago I had so much work to do in the yard and vegetable garden that I was looking forward to winter, when I wouldn't have to be busy all the time. Now I look forward to spring, so that I can get back to work outside. Isn't that the story of life?
Posted by Ken Broadhurst at 08:33