Snow has started falling in the southern part of Normandy, including around Alençon and Le Mans. According to the weather reports on TéléMatin, the snow is moving south toward La Touraine this morning. Later in the day, it will start snowing in the Auvergne, which is the mountainous region in south central France. 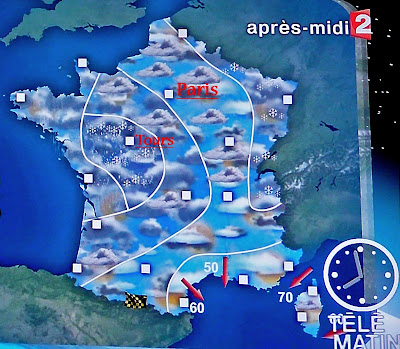 I put Tours and Paris on the morning weather map
so that you can get yourself oriented.
Since we've lived in Saint-Aignan — nearly nine years now — we've had a little bit of snow nearly every winter. In December 2010 (a year ago), we had an unusually snowy period early in the month — snow stayed on the ground for a couple of weeks. Usually, the temperature doesn't stay below freezing for more than three or four days. Until now, it has been exceptionally mild this winter. 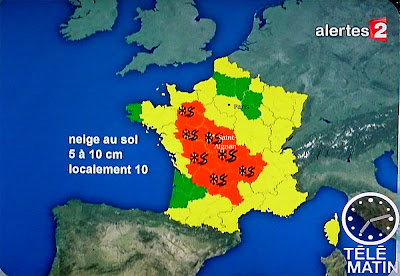 The orange area is where snow is supposed to fall today.
Predictions for snowfall amounts in this current "event" are 5 to 10 centimeters — that's 2 to 4 inches. The most we've ever had on the ground since 2003 has been about 15 cm (6 in.). This morning, we'll just stay in and see if it really does start snowing. We don't need to go anywhere.
Posted by Ken Broadhurst at 07:50