My last U.S. driver's license expired four years ago. My French driver's license — mon permis de conduire — was issued in 1981. That makes it more than 30 years old. That's the way it's been with French licenses. Once you get one, it's good for life and never has to be renewed.

I got my French permis by exchanging my North Carolina driver's license for it. I had to hand over the N.C. license, but it was worth it. They handed me a French license. I was living in Paris at the time. 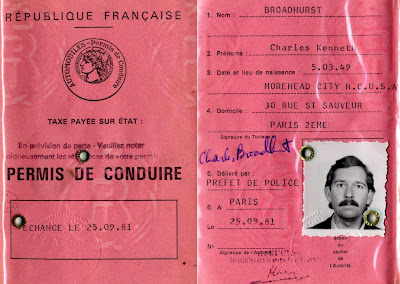 Here are two panels of my French permis de conduire.
The picture doesn't look much like me nowadays.
To get my permis de conduire in Paris, I never had to take any test at all. At the time, North Carolina was one of the states from which the French authorities accepted driver's licenses for exchange. That agreement is no longer in effect, though sixteen U.S. states still are on the French exchange list. California is not one of them. Nor is New York. But Arkansas, Kansas, and Delaware are. Go figure*.

Walt had a California license when we moved to Saint-Aignan. To get a French permis, he was required to enroll in a driving school here and pass both the written and the driving test. He had to do it in French, of course. He learned a lot, and it cost him a lot — about 500 euros. If you move to France, your American license is valid for only 12 months, starting on the day you enter the country.

When I got my French permis, nobody in Paris cared that I didn't know what many of the French road signs meant. Actually, driving in France was not that different from driving in the U.S., except that everything seemed to go and happen faster. The cars were smaller. That year, I had bought a tiny 1972 Renault 4 from some French friends for 1,500 francs ($300). I needed a French license before I could get it insured.

Today, my thirty-something permis is just fine in France. It doesn't matter that it has a 31-year-old picture of me on it, and shows my old address in Paris. Nowadays, if the gendarmes stop you, they just punch your driver's license number into a computer and they pull up your driving record.

The only problem I have with my French license comes when I arrive in the U.S. for a visit. I haven't yet had to rent a car, but Walt rented one in Boston a couple of years ago. The rental agent at the airport didn't bat an eye when Walt presented the French license. Of course, Walt's permis shows a fairly recent picture of him and his current address.

I usually go to North Carolina when I fly across the Atlantic. My mother and sister still live there, in a small town. When I visit, I drive my mother's car. On my last two or three trips, I haven't ever needed to show my driver's license to anyone.

But in 2007, when I still had a valid California license, I was driving my mother's car in Beaufort N.C. when I ran into a routine driver's license check set up by the highway patrol. There was no problem, of course, with the California license. My mother was in the car with me, so no questions were asked about why I was driving a car I didn't own.

But what if that happens again, or I have an accident, or commit an infraction? If I present the old French license, which is a huge pink triple-fold document with my Paris address and my 1981 photo on it, is a local policeman or highway patrolman going to believe that the permis is a valid license to drive? The French consulate for N.C. is in Atlanta, 500 miles to the west.

Because of all that, I've decided it would be a good idea to turn in my old French license and get a new one, with a current picture and my current address on it. Lucky for me, the exchange is free. I have to turn in a couple of pictures with the application form — that's all. I'll get them in taken in a supermarket photo booth. I have to provide proof of my current address — a recent electric bill will do that. Then I'll feel safer when I drive in the U.S.

* Here's a list of the 16 U.S. states that have reciprocal driver's licence agreements with France:
I got the list of state names off a French government web site so they show the French spellings.
Posted by Ken Broadhurst at 08:07