Yesterday I noticed that primroses have already started to bloom out in the yard. Wild cyclamens started blooming a month ago. And one big flowering bush in our neighbors' yard is already covered with red flowers. There's still no mention of freezing weather in the long-range forecasts.

As long as the weather feels like early spring rather than mid-winter, we though we might as well start our spring cleaning chores. Now that we have the upstairs loft finished and we spend a lot of time up there, we have a lot more vacuuming and dusting to do — or that we ought to do — than when our living space was smaller. 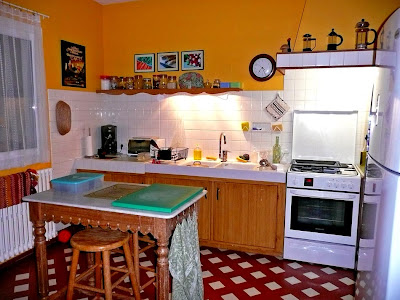 Here's the kitchen on a normal day.
That means other rooms risk getting short shrift. The kitchen, for example, which we occupy for many hours each day. The tile floor gets its share of spills, drips, and splashes. It gets a little wipe with an old sponge as needed, but periodically it also needs a thorough cleaning — it's what's called faire le grand ménage in French. We also pull out the fridge and sometimes the stove and dishwasher to clean under and behind them. 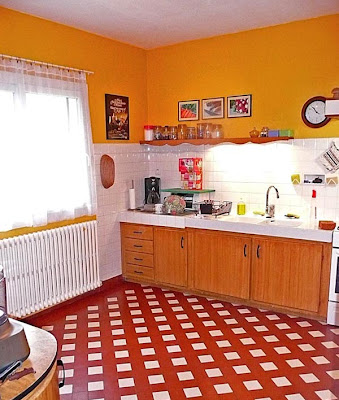 Out go the butcher's table and bar stools, and
in come the vacuum cleaner and the mop.
The kitchen probably looks quaint. It's not large. The only major change we've made since we moved in is a new coat of paint. The cabinets and sink were already here. That was important, because many of the houses we looked at back in 2002 had no kitchen fixtures in them at all — the room called la cuisine was a completely empty space with only a water pipe sticking up out of the floor in one corner.

Other houses had kitchen fixtures that really needed to be ripped out and replaced. With this kitchen, we just added appliances and the butcher's table and started cooking when we arrived in June 2003.
Posted by Ken Broadhurst at 08:20