The big news in France this morning is that the country's credit rating has been downgraded from AAA to AA+ by the big international banks. That might not sound like a catastrophe, but it means that France will have to pay higher interest rates to borrow the money that the country needs to finance its huge budget deficits. 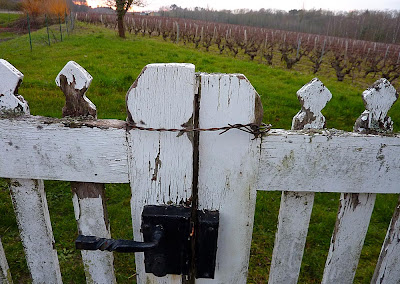 Looking out the back gate yesterday afternoon
Long-term, the downgraded credit rating will make prices and taxes here go up. Government services will probably be curtailed, to reduce deficits. The government will have to crack down and impose budgetary rigueur — austerity. That's what has already happened in Greece, Ireland, Portugal, Italy, and Spain. Now France. And also in the U.S., by the way, but the American economy and budget are so enormous compared to the individual European countries' that the U.S. is in a category by itself. 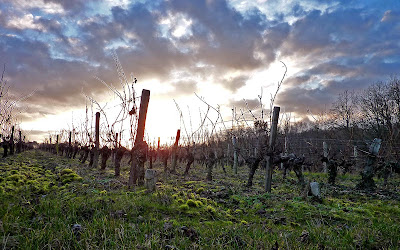 The afternoon of Friday the 13th no. 1 turned out mostly sunny
Pessimists will say that the euro zone is falling apart. But for most people in France, the effect of the credit downgrade on everyday life won't be felt for a while. For us expatriates whose pensions and assets are in, for example, U.S. dollars rather than euros, the effect is immediate. The euro is declining in value, which means that our dollars are worth more. My retirement income has increased in value in euros by more than 15% since I started collecting it last May. A 15% raise is nothing to sneeze at. 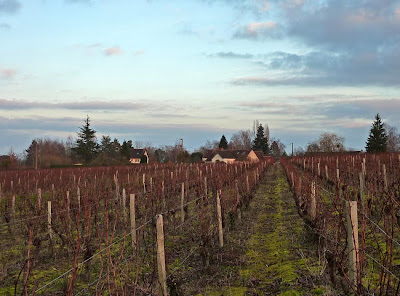 The house seen up and across several rows of grape vines
Meanwhile, inflation rates are going up in France. Everything costs more, especially oil. It's a vicious circle, of course, and there's no such thing as a free lunch. But I'd rather have a little more income and control my spending myself rather than living with the low value of the dollar as the factor that restricts my budget. It's partly psychological. 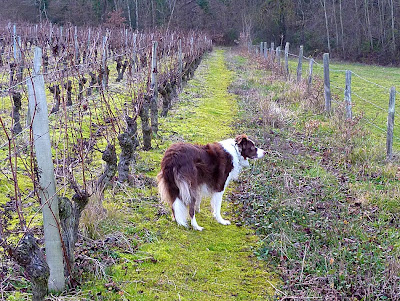 Callie is looking through the barbed wire fence to see if the
donkeys are in their pen. She's justifiably afraid of them.
Donkeys really detest dogs.
Long-term, I'd like the see the dollar-euro exchange rate stabilize at a reasonable level — say a dollar worth 80 to 85 eurocents, which would mean a euro worth about $1.20 U.S. That's what the exchange rate was six years ago — I've gone back and researched it. 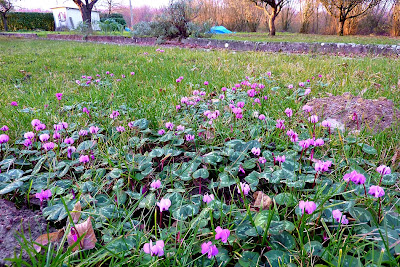 Wild cyclamens blooming yesterday in the back yard
At one point in 2008, the euro was worth as much as $1.60, and that was worrisome to say the least. At that rate, I'd lose 20% of my current income in euros. These are the realities and uncertainties of life for an American expatriate retiree in France.
Posted by Ken Broadhurst at 08:00