...to be autumn in northern France. That's what people are saying. We haven't yet had any cold weather. Not one morning has seen temperatures below freezing, and only one or two have given us a little bit of frost. Winter is too timid.

Now, the fog has come back. That's the weather we get when there's a high pressure system dominating the weather. La grisaille est plaquée au sol, they say. I guess it's some kind of inversion. And it's better to have thick fog than strong winds. 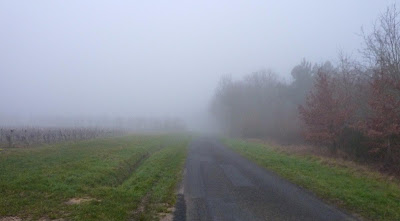 Yesterday on La Route Touristique du Vignoble, whereI sometimes walk with Callie in the morning
Right now, and for the last day or two, France is divided in half, north vs. south. Saint-Aignan is right on the dividing line, as usual. The northern part of the country is foggy and gray, with little difference between morning lows and afternoon highs (both in the high 40s to low 50s F). The southern part is having cold mornings, and sunny warm afternoons. 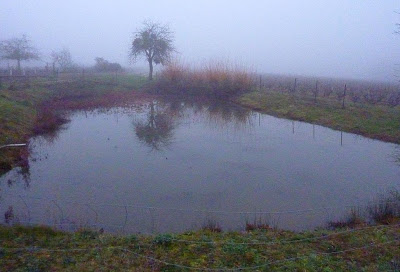 The pond out back hasn't frozen over even once this year.
This morning, the temperature in Toulouse is –1ºC, while at our house outside Saint-Aignan it's +6. In other words, it's more than 10 degrees F warmer here that it is a few hundred miles south. 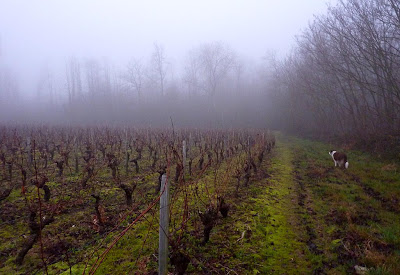 Callie at the edge of the vineyard in fog yesterday.
Health authorities are reporting outbreaks of bronchial infections and gastroenteritis that they are attributing to damp conditions unusually mild temperatures. Actually, I'm still suffering aftereffects — a dry cough, and stuffed-up sinuses — from the cold I had at Christmastime. There's no outbreak of flu, however. They say it's not cold enough for that. 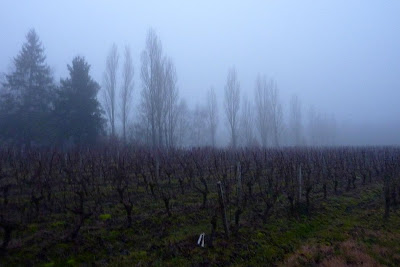 Vines, evergreens, and poplar trees at 9:00 a.m. yesterday
We still have flowers in the yard and in the vineyard. And we still have bugs. It's not cold enough to kill them or make them go dormant, so they come into the house. Yesterday I put a live bee outside. Flies buzz around my desk lamp in the morning. And I keep finding punaises — stinkbugs — up in the loft. Two or three a day.

They are promising us colder weather by the weekend, and I hope they are right.

P.S. 8:45 a.m. When dawn finally broke this morning, I was surprised to see a pretty sunrise rather than yesterday's gloom. The fog/no fog line has moved slightly north. I can see the fog bank to the north when I look out the loft window that faces toward Blois. So it's sunny again. I'll take it.
Posted by Ken Broadhurst at 07:39