“...one of the great European symbols of royal megalomania, a truly glorious and absurd monster of French architecture.” *

“...a staggering sight, looking like a riotously exuberant yet self-contained royal city.” 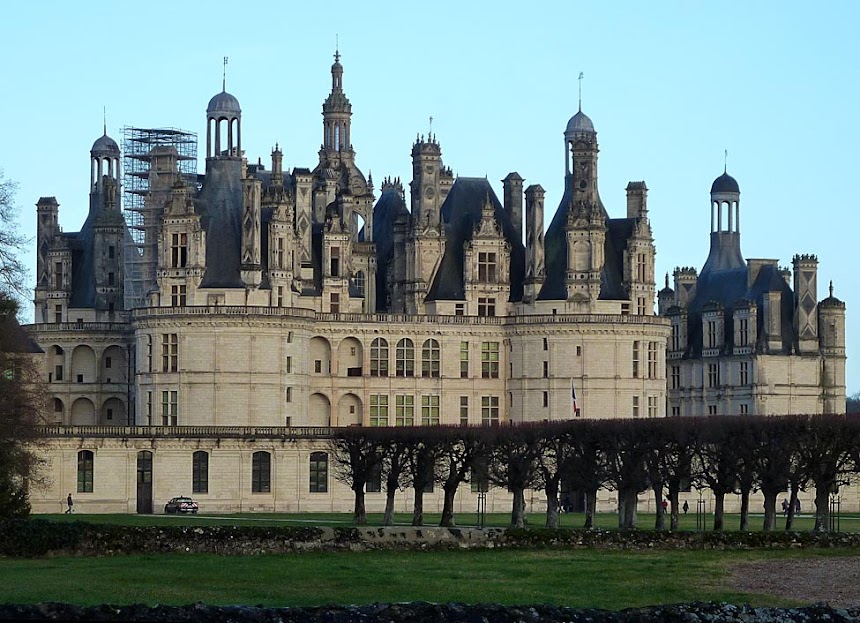 “...although Chambord contains a panoply of Italianate Renaissance features, its general forms actually harp... back to medieval architecture. The formidably solid round towers at the corners... with their roofs like great upturned funnels, could come from a textbook image of a chivalric castle.”

“...an obsessively ordered building, [with] neo-classical Renaissance ideas imposing symmetry and precise proportions on the façades.” 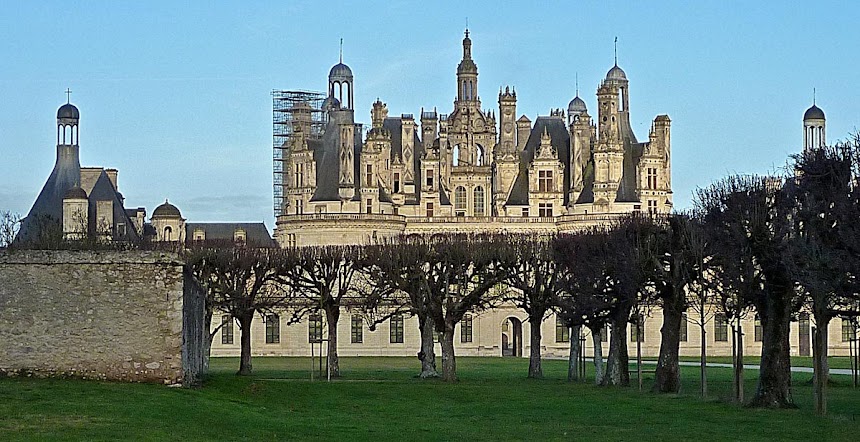 “...bear in mind what an important royal seat the nearby town of Blois was at the time. Chambord was... a deliberate demonstration of royal magnificence and power...”

“Inside, what you see and visit... [is] one of the first apartment blocks in modern Europe... hundred of rooms repeat the same patterns... a staggering 85 staircases...”

“[the] wonderful roofs [have] been compared to an overcrowded chessboard, an exotic Eastern palace... un gigantesque bouquet de pierres...”

The Château de Chambord was built starting in 1519 by order of the early French Renaissance king François Ier — he was 25 years old at the time. Leonardo da Vinci may have had a hand in designing the castle, but it's unclear who the chief architect was.

According to some local people here, "the good king" François liked to hunt in the woods just south of Saint-Aignan, at a place called La Lardière. Chambord is about 25 miles north of Saint-Aignan, and the stone out of which it was built was quarried just a few miles down the Cher River at Bourré, near Montrichard.

At this point, I have outlived King François Ier by ten years...
By the time François died (of syphilis) in 1547, at the ripe age of 53, Chambord was nearly finished. It stood basically empty for a century, until Louis XIV — le Roi-Soleil — took an interest in it. Great parties and celebrations were held there. In 1670, for example, Molière staged his first production of Le Bourgeois Gentilhomme at Chambord for the Sun King and his court.

A few generations later, during the French Revolution of 1789 and the following years, most of the interior of Chambord was stripped bare. The château now belongs to the French government. You can visit the grounds and see the building for the price of parking in one of the surrounding lots. There's a huge gift shop. To see the interior, including the famous double-helix staircase that is at the core of the building, there's an entrance fee.