Usually, coq au vin is made with red wine. It is nothing more than a chicken fricasee — une fricassée de poulet — and that is a stew. So coq au vin is chicken stewed in wine, and usually it's red wine, but you can do the same thing with white wine. That's what I did a few days ago.

The word fricassée has been around for 550 years, according to the dictionary. It was first used in writing by the medieval French poet François Villon in 1460. When Villon was 24 years old and living "a turbulent life" in the Latin Quarter in Paris, he got into a fight and ended up killing a priest. He had to leave Paris and went into exile in Blois. He was later in prison in Meung-sur-Loire, between Blois and Orléans. But that's a story for another time... 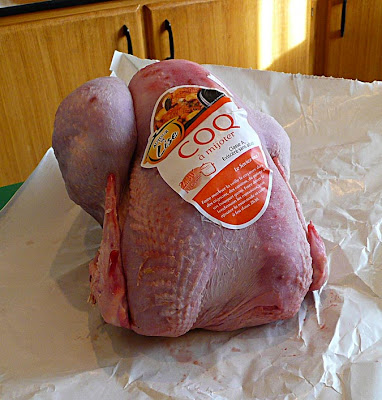 The supermarket ad used the verb braiser (to braise) but the
label on the rooster used the verb mijoter (to simmer or stew).
Coq au vin was traditionally a way to cook and tenderize a tough old rooster or coq. You can make the dish with a younger chicken, and you don't have to cook it as long. What I bought in December was a coq à braiser or à mijoter— a rooster for braising, or stewing. I got it at Intermarché and it weighed about 3.5 kg — over 7 lbs. — and cost only about 10 euros. 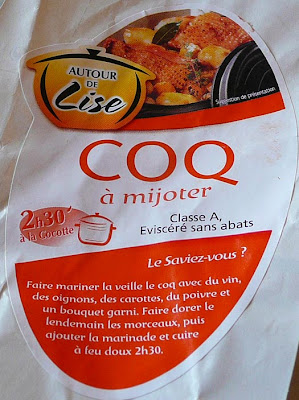 Cooking instructions and times are given on the label.
I cut the coq up into 10 serving pieces — two wings, two thighs, two drumsticks, and four pieces of breast meat. Then a realized that I still had close to 6 lbs. of meat so I froze it in two packages, with half the bird in each plastic bag, for cooking this winter. I made broth with the carcass and wing tips and froze that too. 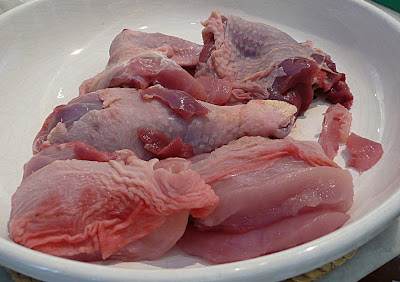 The coq all cut up — half the pieces, actually
To make coq au vin, you can choose first to marinate the chicken pieces or not. Walt wanted it marinated, so we chopped a big carrot, a big onion, a couple of garlic cloves, and put that and the rooster pieces in a dish. We added herbs — bay leaf, thyme, rosemary — and salt and pepper, and then poured on enough white wine and chicken broth, about half and half, to cover everything. That went into the fridge to marinate for 24 hours. 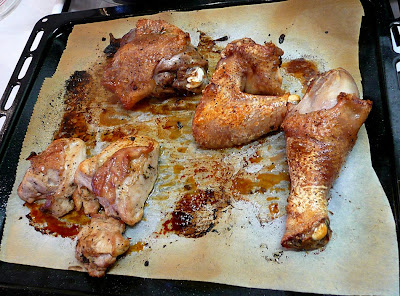 It's easier and less messy to brown the chicken parts in the oven
than in a pan on top of the stove.
The next day, what you do is take the chicken pieces out of the marinade, dry them off with paper towels, and brown them in a pan or in the oven with some butter or vegetable oil. When the pieces are well browned, put them in a baking dish and pour the marinade back over them. Put the dish in a hot oven and let it cook for an hour (for a chicken) or two to three hours (for a tough old rooster or stewing hen). It's pretty much done at that point. 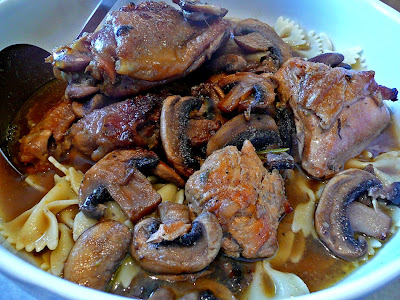 Coq au vin blanc avec champignons et farfalle
One way to serve it is to take the chicken pieces out of the stewing liquid, put them in a serving dish, and pour the liquid through a strainer over them. That takes out the bay leaves, carrots, and onions, which have given their flavor to the sauce (a.k.a. gravy), especially if the dish has cooked for two hours or more. You can thicken the sauce with a butter-and-flour roux or with cornstarch or potato starch if you want. 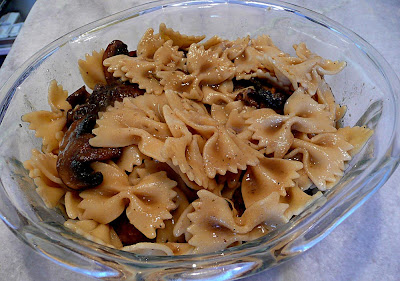 Leftovers of bow-tie pasta, mushrooms, and some chicken
The traditional garnish to serve with a fricasseed bird in Burgundy is some chunks of bacon or ham sauteed in butter, and some mushrooms also sauteed in butter. If you can get pearl onions and want to be bothered peeling and cooking them, they're good with it too. I think you can buy peeled, frozen pearl onions in the U.S. (I haven't found them here in Saint-Aignan). Put the sauteed mushrooms and bacon or ham chunks, and the pearl onions, in the gravy with the chicken. Serve with rice, pasta, or potatoes (boiled, fried, or mashed) and a green salad. Bread and wine... Bon appétit.
Posted by Ken Broadhurst at 09:33