...even if the weather is not wintry. The mild autumn and even milder — relatively speaking — beginning of winter must have created perfect conditions for the cauliflower crop. I've never seen the big white flower buds more beautiful at the supermarket, and the prices are lower than I can remember over the past seven or eight years.

The problem with cauliflower is that it's easy to get into a rut. Gratin de chou-fleur in a béchamel sauce and a lot of grated cheese (Gruyère or Comté) melted over the top is so good that it's tempting to cook cauliflower that way every time. But there are other options: raw cauliflower served with a home-made mayonnaise is really good. Cooked cauliflower in a vinaigrette dressing too. Or cream of cauliflower soup. 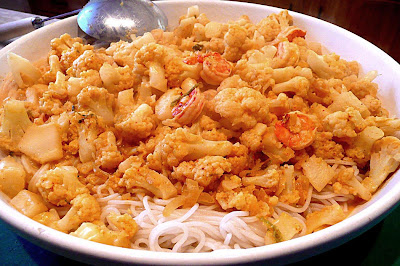 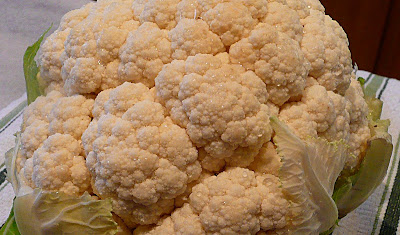 The cauliflower has been plentiful, inexpensive,
and beautiful this winter.
It's a really simple recipe. The most time-consuming part is cutting up the cauliflower. First I cut it into big fleurettes, but that didn't seem right for a curry. So I cut each large fleurette into much smaller pieces. In all, it probably took about 20 minutes with a sharp knife to get it all cut up. You could do it much faster by just chopping the cauliflower with a large knife, and the result would be just as good if not as pretty. 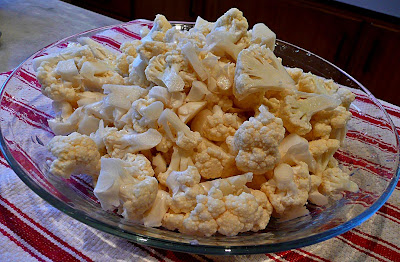 Reduce the cauliflower to its individual fleurettes or buds
for quick and even cooking.
After cutting up the chou-fleur the way you decide to do it, it's just a matter of blanching the fleurettes in simmering water for five to ten minutes. Some people like their cauliflower well cooked and tender, while others prefer it with a little crunch. This first step is just a blanching, so don't overdo it. 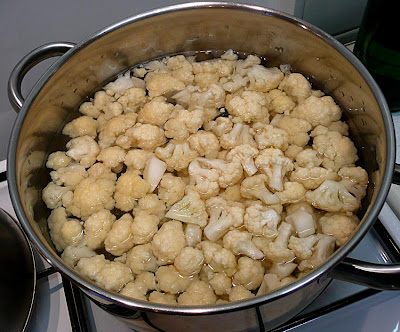 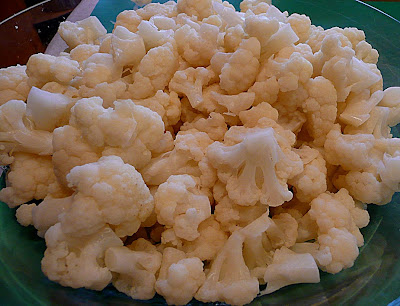 ... and blanched
While blanching the cauliflower, make a curry sauce. Dice up an onion or two, or some shallots, and sauté them in a pan in butter or vegetable oil. Add a tablespoon or two of curry powder, or smaller quantities of individual spices to make your own: half a teaspoon each of cumin, turmeric, cayenne pepper, and so on. Salt and pepper. Garlic. Toast the spices in the pan with the chopped onion. 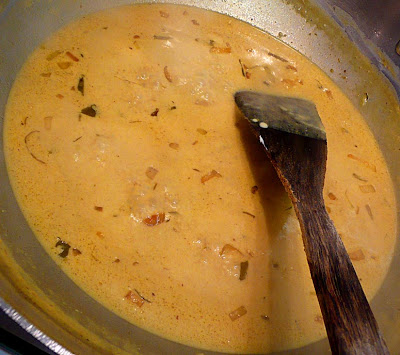 The curry sauce made with onions and coconut milk
Pour half a cup or more of coconut milk over the onions and spices and let the sauce cook while you drain the blanched cauliflower pieces in a colander. In Saint-Aignan, coconut milk is available in the supermarkets, no problem. I think you could use cream, or half cream and half milk, or yogurt to make the sauce if you don't have coconut milk. 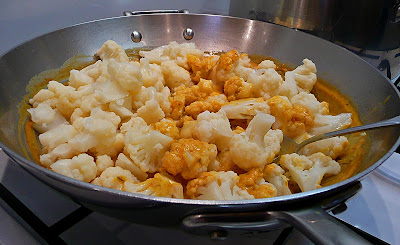 Gently fold the blanched cauliflower pieces into the sauce
and let it cook for a few more minutes.
Add the blanched cauliflower to the pan and gently toss it in the sauce. Add some broth or some more coconut milk as necessary to make enough sauce for the cauliflower to cook it for a few minutes. After five to ten minutes, depending on how cooked you want the vegetables to be, it's done. A squeeze of lime or lemon juice, or some kaffir lime leaves added during the cooking, will give it a nice freshness.

You'll see in the pictures that I added a few shrimp to the curry. I added them about five minutes before I thought it would be ready. They were raw and they cooked in the sauce. You could also add sauteed pieces or strips of chicken breast meat to the sauce instead of shrimp. Or what about scallops? Langoustines? Or tofu?
Posted by Ken Broadhurst at 08:30